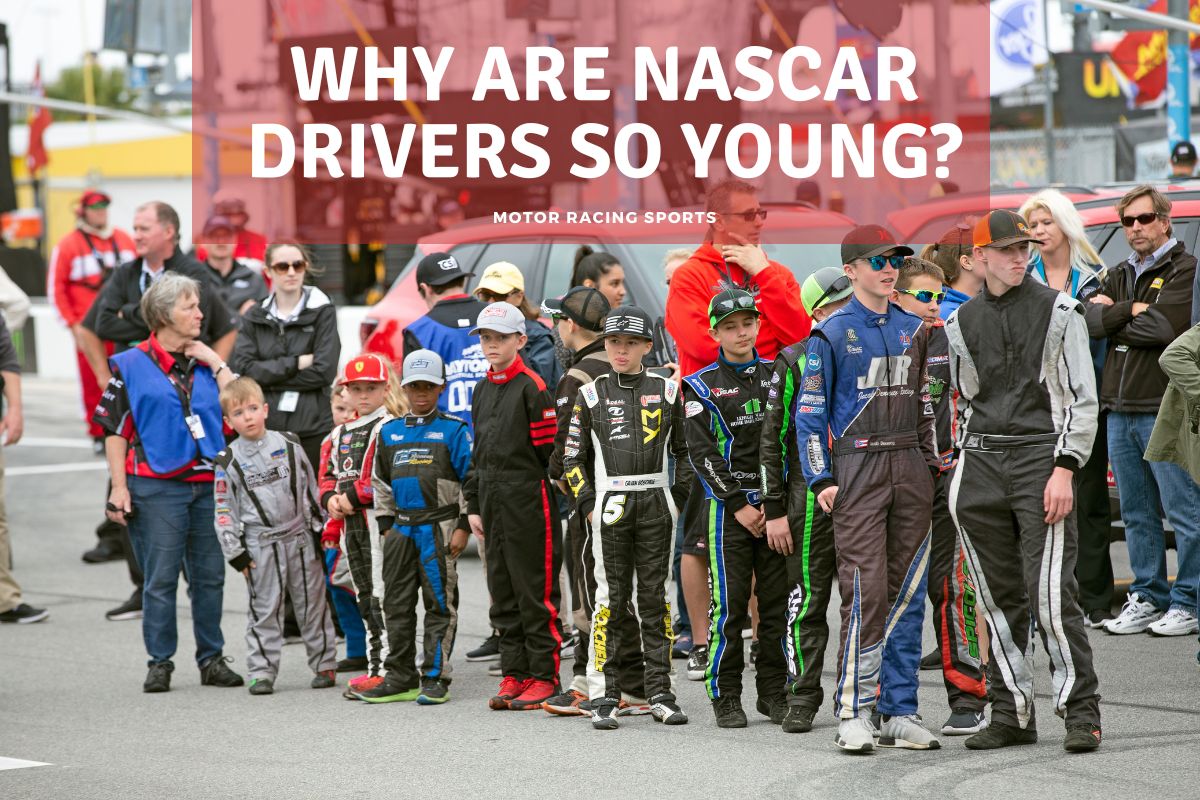 Average ages of NASCAR Drivers have reduced over the last 30 years due to a contribution of factors. Easier and more affordable access to racing schools, attitudes to racing as a career, lower age limits for racing series and the earlier retirement of drivers have all created a younger average age for NASCAR drivers.

What’s causing this shift? What are NASCAR drivers seemingly so young these days? This is what we’re trying to determine in this article.

Why Are NASCAR Drivers Getting Younger?

The first reason for an increase in younger drivers is NASCAR itself lowering the minimum age requirements for regional competitions. On top of that, there has been a lot of expansion and growth in the racing academy industry, with more racing driving schools popping up and more raceways offering professional-standard courses to drivers of all ages.

Finally, we have a more affluent society these days in which more people are exploring alternative paths through life, including pursuing careers in racing and other sports.

While it’s still necessary to be 18 years old to compete full time in the NASCAR Cup, Truck and XFinity Series — with the exception of 16-year-olds being able to compete in 1.25 mile or shorter tracks in the Truck Series — the lowering of the age limit for regionals means that younger and younger drivers are getting professional-level experience to add to the invariably rich experience they’ve already gained in the karting and other junior motorsports circuits.

After making the announcement, NASCAR’s statement included the following:

The initial lowering of the regional age limit from 18 to 16 back in 2007 was a boon to racing academies all over the country. These schools now had more candidates to compete for, and more at stake for their reputation.

New academies sprung up and existing ones reformed to meet the challenge of helping younger drivers. Lowering it further to 15 years old in 2022 only means this process will continue in the coming years.

There are now dozens of accredited schools and academies across the country offering everything from single-day experiences and weekend courses to more prolonged training for those getting ready for the big leagues. Some are geared specifically towards those with a novice permit, others for those climbing the ladder to the next level, and then even more schools beyond that.

More racing academies means more power behind the marketing and advertising of such courses and career paths, not to mention an overall reduction in price as supply of courses and support has increased. This makes professional guidance more accessible to more junior go-kart drivers and others starting out in the world of motorsports.

Finally, drivers are getting younger because our ever-more affluent society allows young people to pursue a career in motorsports from a younger age, without any distraction or diversion. In the past, legendary drivers such as Dale Earnhardt senior relied a lot on his family background in motorsports to get his start, and didn’t even enter his first Winston Cup Series until 1975 when he was already 24.

The story was similar for other legends like Richard Petty, also the son of a NASCAR driver Lee Arnold Petty. It’s no wonder that the average age back then was higher when only those with the right connections were invariably able to get through the door at a much younger age. There are always exceptions, of course, but it’s impossible to deny the impact of our shifting society on the apparent and consistently falling average age of NASCAR drivers.

In a society where the young are encouraged from birth to pursue their passions, and where the system is now geared towards locating talent as early as possible, wherever it may reside, the natural result is an increasingly youthful crop of drivers who are ready to take on the challenges of the top-level NASCAR events.

Are Younger Drivers Good for NASCAR?

Is it good news that NASCAR drivers nowadays are younger than in years past? Many argue that it is indeed good news because it helps to make races a bit more exciting and fiery as youthful passion is allowed to shine through. Others are more cautious, however, worrying that steadier and more experienced hands and eyes are better when it comes to running a 200-mph stock car flying around a track.

Perhaps a better way of looking at it is that younger drivers means greater longevity for the sport. Fans can potentially follow their favorite drivers for longer, but also drivers can retire earlier and avoid what can be terrible health risks that come with dealing with the strains of a NASCAR season in an older body. Either way, it’s good for someone. In both cases, the better fostering of younger drivers means the sport will always secure its line of future superstars.

Who is the youngest ever NASCAR Cup Driver?

Unsurprisingly from the information above a lot of the youngest drivers have been in the last 20 years or so, so while the current ( 2022 season) driver is Harrison Burton in his rookie year he is not the youngest to compete in the NASCAR Cup series. We have some of those in the table below with there NASCAR Debut.

There are drivers as young as 15 who have been recorded as racing in the Cup Series, but in the modern ( safety conscious age perhaps) these are some of the youngest ever NASCAR drivers.

We have other articles on the site that discuss NAScar driver age you can check them out below.

As we highlighted above the reasons for NASCAR drivers appearing to be younger is actually because they are!. reasons for this include

All of this has created a situation that gives access to NASCAR to a younger driver, and of course perhaps the main reason it seems NASCAR drivers are so Young…. we are all not getting any younger!