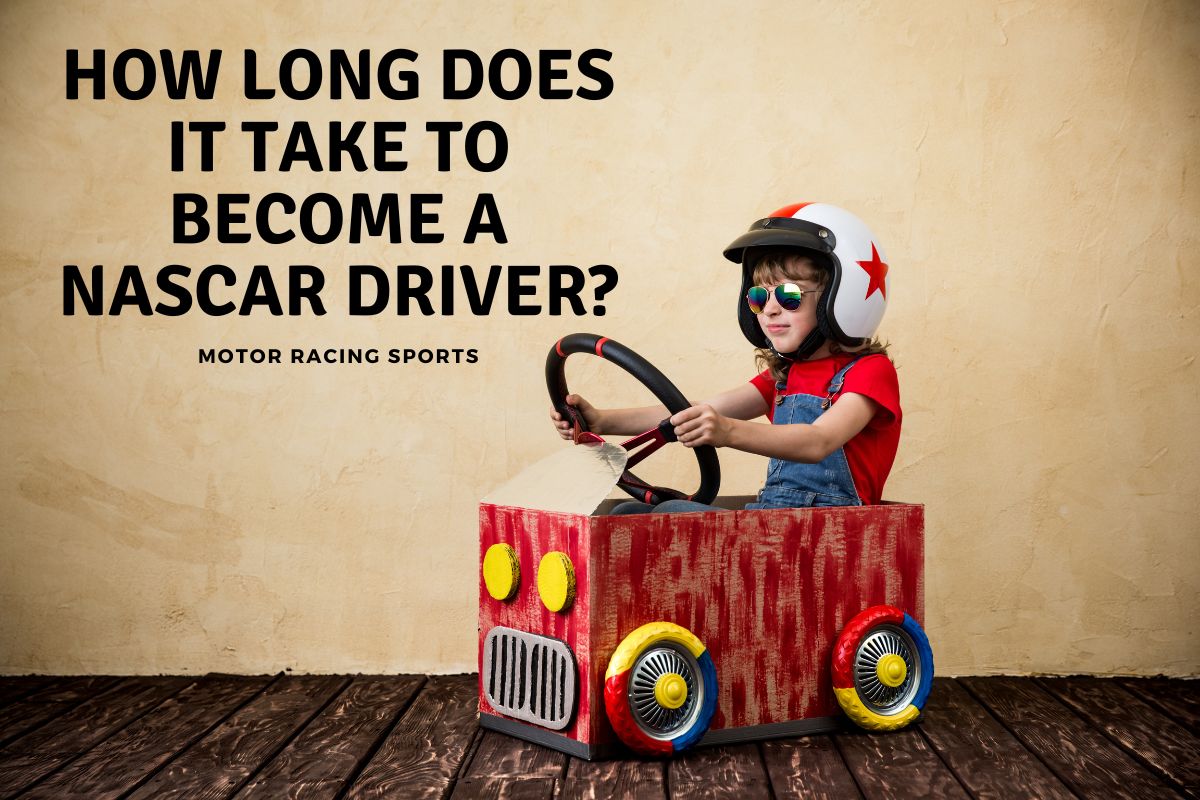 With the average age of NASCAR drivers appearing to be somewhat lower than it has been in previous years, and with so many young 20-something drivers in the field, it’s easy to assume that becoming a NASCAR driver doesn’t take long at all. Most of us start driving at 16, right? If 21-year-old Harrison Burton is anything to go by, those of us with some skill could potentially be racing within a few years? Oh, if only it were that simple.

The average length of time to become a NASCAR driver is between 10 to 15 years from starting racing. Drivers commonly start racing in go karts at as young as 6 years old, and move to late models and bandoleros before being spotted by NASCAR teams and having a chance to race in the NASCAR Nationwide series.

In fact, the road to becoming a NASCAR driver absolutely doesn’t start at the regular legal driving age. In today’s blog, we’ll be going into some detail on how long it actually takes to become one of those titans of the NASCAR track.

As with just about any professional-level sport, the earlier one starts their journey in that particular world, the better. For those parents who engage their child’s interest in motorsports early, perhaps even as young as 4-5 years old, they can get a head start by teaching their kids to drive karts.

They’re not exactly NASCAR race cars — nor would you want them to be, we hope! — but they help to offer insight into a child’s natural talent and aptitude within motorsports generally.

We have an article on both the average age of NASCAR drivers, and why NASCAR Drivers are so young here on the site you can follow the links to check them out.

Those with a strong ability in karts can climb the rankings in that world, even moving on to racing cars, gaining track and competition experience, and most importantly gaining a reputation as a talented driver.

Such a reputation draws the attention of NASCAR teams and other sponsors, who will then see that a young prodigy gets taken into the right racing school to acquire their license.

Drivers have to be at least 18 years old to get the full and proper NASCAR license. It is also a good idea to attend a racing school program as a preemptive step to starting on the license application process.

While there’s no formal standard test for NASCAR drivers, it is sometimes requested by NASCAR officials that applicants do take part in a driving ability test. This is most often applied to those with more limited racing experience before applying.

We have a full longer article on the steps to take to be considered for NASCAR racing here on the site which you can check out here and below.

Such driving school programs are short, often just 3-7 days of intensive courses, but they are also a critical chance for drivers who aren’t as well connected in the NASCAR world to meet key people within different teams and at different race tracks.

Another key factor behind the application process is the medical, with NASCAR having very strict (and high) standards for physical fitness.

Having attended a course, passed the medical, and then provided the additional documentation, waivers, consent forms and other application documents, NASCAR will review each case individually, taking up to 2 months before making a final decision.

Even with everything in order, there’s still a chance that an application can be rejected in the end.

One of the most important steps they take during the review process is to look more deeply into your past racing experience. While you don’t have to be one of those kids who started at 4 years old, you do have to be able to satisfy NASCAR officials that you have enough relevant driving experience and competition experience to be able to compete in the NASCAR field.

This isn’t about ensuring a certain quality of drivers for their sport, but also to ensure that the applicant and other drivers in the field will be safe during any event.

Putting it All Together

So what does that all mean in terms of a real timeframe? Getting your license isn’t an instant ticket to the NASCAR Cup Series, after all. Most of the young, up-and-coming stars got their big break not just because of their driving ability, but because of their connections in the field.

For one thing, there’s quite a lot of “legacy” racing in NASCAR, with children following in parents’ footsteps and using those connections to get ahead.

This absolutely doesn’t mean that NASCAR is a closed shop for “family and friends” only. Keeping famous names in the sport is one thing, but they have to have the proper-sized pool of talent to back it all up. That means attracting talent from all walks of life and from all around the country.

This is where sponsors and team talent scouts come in, always surveying the karting and junior driving scene to see where the best talent lies.

Those with the proper skills and reputation will get the support of these key individuals and organizations, which acts as the final leg-up required to get into the world of NASCAR racing. So what does all that add up to in the end, in terms of time taken?

Those who are serious about becoming a NASCAR driver will allow the maximum amount of time for themselves to acquire the knowledge, experience and professional attention required, which generally amounts to at least 10 years, starting at age 4-6, getting noticed at age 16-18, and then moving on to get one’s NASCAR license and start working within a professional team.

A decade might be a solid average, but the fact is that it could even take 15 years or more for one to get where one really wants. As with many careers, the longer one leaves it to get started, the harder it is to break into that sport.

In theory, there’d be nothing stopping someone already in their late teens or early twenties starting out and trying to break into the sport, since we know that many drivers go on in the sport well into their 30s and 40s, providing they remain physically capable.

However, with talent scouts mostly focused on the youth of motorsport when looking for future talent, it stands to reason that the earlier one begins, the better chance that one has of one’s overall journey from enthusiastic amateur to hardy professional NASCAR driver being as short and direct as possible.

While it certainly helps to be born with Sunco 15 in your veins like Harrison Burton or Ty Gibbs and have family connections, there are other ways to train yourself up for 3 hours round a NASCAR oval but a key factor is the younger you start the better chance you have.

Driving schools, Karting, late models all offer a taste, albeit slower and smaller, of what it would be like to drive a NASCAR race car and also offer a chance to be spotted if you have the talent and skills. However it will take years, if ever, to be spotted and perhaps even longer to start seeing an expense account in the black rather than the red.

To be at the pinnacle of a motor sport like NASCAR takes years and years, from 10 to 15 on average to be spotted and successful so unlike the races it is anything but quick!