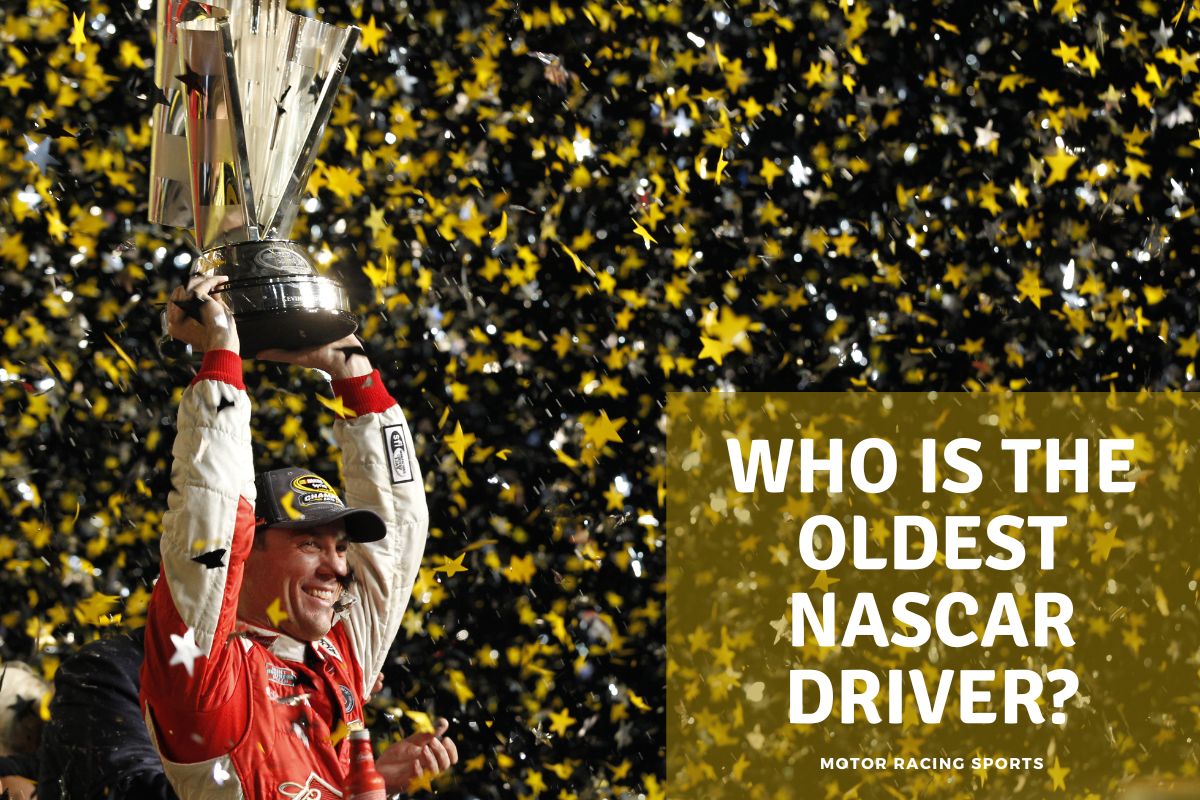 In other articles on this site, we have previously looked at the trend of drivers in the world of NASCAR getting younger and younger on average. It’s certainly the case that between 1980 and 2021, the average age of a NASCAR driver in the Cup Series has dropped from almost 38 years old to just a little over 30 years old.

Who is the Oldest Active NASCAR Driver Around Today?

There are a lot of different ways one could look at this question, but it seems to us that the most logical way is first to look at who is the oldest active full-time driver in the flagship NASCAR Cup Series. The answer to that is Kevin Harvick, who was born on December 8, 1975, and thus at the time of writing is 46 years old.

If we expand the list to include the part-time drivers, then Boris Said is the oldest active driver at 59 years old.

However, if you want to know the oldest NASCAR driver ever to take part in a race, then that title goes to the legendary Hershel McGriff, who was born in December 1927.

Hershel McGriff is actually no stranger to being the oldest NASCAR driver, since it’s a record he has held across different categories and races for a number of years. The first time he received the accolade was back in 1989 when he won an AutoZone West Series at the age of 61 years. Fast forward to 1996 when he was 68 years old, and he was at it again, this time in the NASCAR Suzuka Thunder Special.

While McGriff officially retired back in 2002, he continued to appear in occasional races, including the above-mentioned 2018 series where he took part in the event at the Tucson Speedway at the age of 90. It’s hard to imagine, but McGriff was actually racing before NASCAR was a truly big organization. He started his racing career back in 1945, and then raced in NASCAR from 1950 to 1954 after a meeting with NASCAR’s founder Bill France.

Harvick hails from Bakersfield, California, and started his NASCAR journey back in 1995 in the Craftsman Truck Series, before moving up to the NASCAR Grand National Division, AutoZone West Series in 1997. By 1999, he had made it into the Busch Series, and then made his Cup Series debut back in 2001.

Interestingly, despite there being a close connection between Kevin Harvick and the late Dale Earnhardt Sr, the two actually never raced together in the Cup Series while Earnhardt was alive.

Among the current active drivers, the oldest who competed with Earnhardt on the track is Kurt Busch. On learning this, many questioned whether that should be Harvick, given his 2-year seniority over Busch, but the tragic truth is that Harvick only raced to replace Earnhardt, and was never on the track with him in the Cup Series.

An interesting nickname was coined for Harvick, “Happy Harvick” which is ironically used in light of his proclivity for angry outbursts on race day. They even use a smiley face for his pit sign. To those not-so-kind commentators out there, this would make Harvick the resident “grumpy old man” of the full-time driver roster in the NASCAR Cup Series.

Which NASCAR Driver Has Had the Longest Career?

This particular accolade should go to Morgan Shepherd, whose career has spanned more than 50 years, about 42 of them fully active, between 1967 and 2019. He was also the second-oldest race winner in 1993 when he won in Atlanta aged 51.

In 2014, he became the oldest starter in the NASCAR Cup Series, starting the 2014 Camping World RV Sales 301 at 72 years old. On top of all that, he holds the record for oldest driver starting a race in the NASCAR top three series at age 77.

There’s no doubt, however, that McGriff remains the “senior” of the two in terms of overall worldliness, though at Shepherd’s 80 and McGriff’s 94, it’s unlikely either would quibble a great deal over this.

It’s natural to think that with the decreasing average age in NASCAR, that it’s increasingly becoming a young man’s game. However, men like McGriff and Shepherd show that the passion for this sport never really dies with age, and that there’s still plenty of room behind the wheel, on occasion, for those who are well past their age of retirement.

Why are nascar drivers so young

Despite the average age of NASCSR drivers may indeed be heading towards the younger age range. However, that hasn’t stopped plenty of the older generation making their mark. Including Hershel Mcgriff who hold the record for the oldest ever driver at 94 years old.

However there are plenty of others who,although don’t reach that venerable age, still are respectable ages to drive in NASCAR races. Morgan Shepherd for example holding the record for oldest starter in an Top 3 NASCAR series race ( truck) at 77. Boris Said at 59 as the oldest part time driver, and of course Kevin Harvick at 46 as the oldest full time NASCAR driver.

So NASCAR might be played by young people, but its far from a young persons game, as the four examples we have highlighted above.

link to How Many Hours Long Is A NASCAR Race?

Grindstone Media/Shutterstock Each weekend the three series of NASCAR's Nationwide races kick of on usually the Friday, Saturday and Sunday of the weekend. There are some exceptions. Sometimes it...

Continue Reading
link to What is a Wedge Adjustment in NASCAR?

In the past, when you’ve been watching a NASCAR race, have you noticed when the announcers are talking about a pit crew preparing to perform a wedge adjustment on a car? You might have just taken...