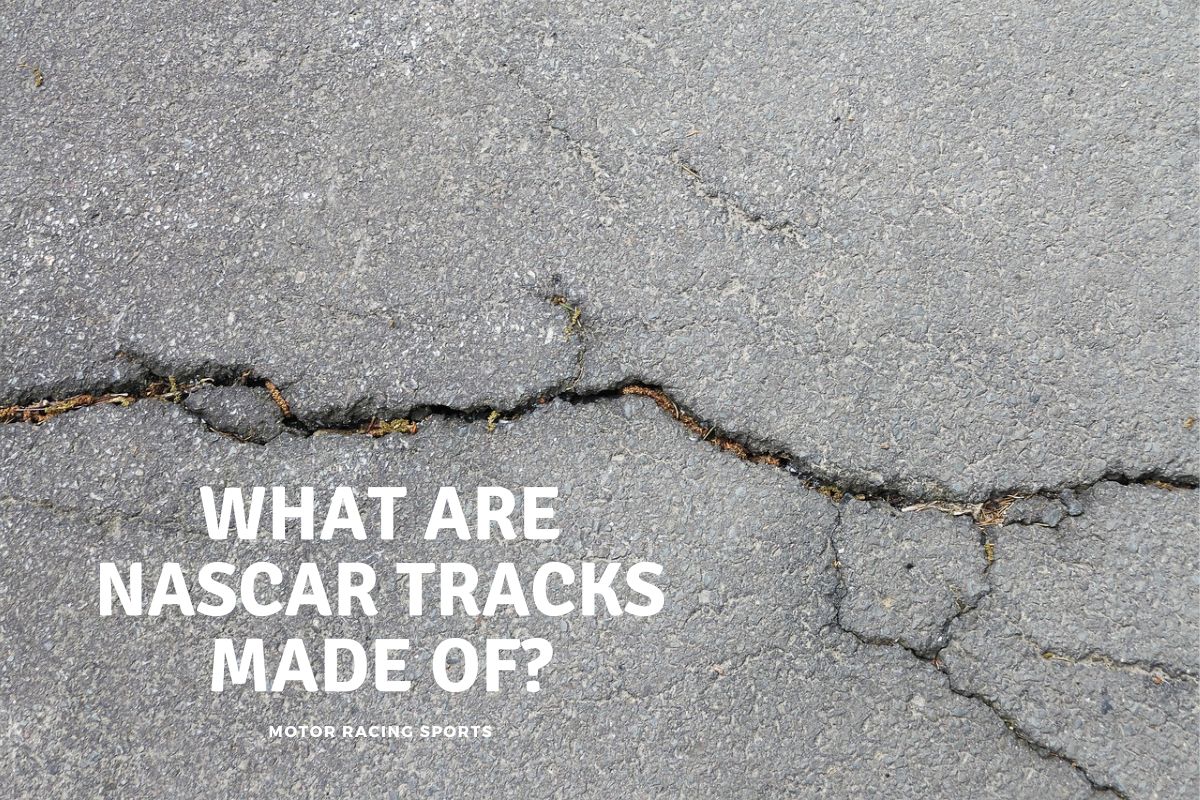 What NASCAR tracks are made of is one of those questions that seems deceptively simple on the surface, but in fact there’s quite a lot more to the story. In a blind survey of the public, it’s quite likely that the most common answer to this question would be asphalt, and they’d be right that asphalt does feature prominently in modern NASCAR track surfacing, but in this article we’re going to try and dig a little deeper to find out more. Scratch at that surface you might say 😉

NASCAR tracks are primarily constructed using three materials, Asphalt, Concrete and Dirt. Asphalt is overwhelmingly the dominant material with 83.3% of tracks being surfaced with this, compared to concretes 13% and dirt tracks making just 3.7% of NASCAR Race track surfaces.

What exactly are the materials used to make a modern NASCAR track? Are they all the same? How have these materials changed over time? Read on to find out the answers to these questions and more.

What are Most NASCAR Tracks Made Of?

In the modern day, the vast majority of NASCAR tracks are made of asphalt, but the story doesn’t stop there. NASCAR has previously pointed out that the detail of each surface reveals a great variety of racing track surfaces, each offering either an advantage or a challenge to drivers and teams hoping to gain victory on race day.

The main rule of thumb when it comes to tracks and racing is that the smoother the track is, the better it is for the drivers. Concrete tends to offer the smoothest driving experience, but it’s apparent that some track builders think that would be too easy, and more expensive.

Some tracks, like the Indianapolis Speedway are infamously rough, and have been described by some as tracks that can “chew up tires” through a race. However, it’s by no means the worst of the bunch – see the table further below for more.

How smooth are NASCAR Race Tracks

The sanctioning body that governs NASCAR has a system of measurement using micrometers that measures from the deepest “trough” in the surface to the highest “peak.” Below are some examples of how different speedways measure up. The lower the variance of micrometers, the smoother the track is and therefore typically more beloved by the drivers. Below we have a selection of commonly used, and where there is available data, of track smoothness and their race track surface material.

Of all the current Cup Series NASCAR tracks, only 4 of them are paved with something other than asphalt, namely concrete. These 3 locations are:

As you’ll also notice if you look back at the above table, these 3 locations also make up the top 3 smoothest racetracks in the entire NASCAR lineup. What these tracks have in common also is that they are a mile or less in length and feature significant banking.

Nashville is also considered incredibly smooth according to drivers,

we are waiting on the data to see how smooth it is compared to other tracks, however it is the only purpose built concrete track ( the others were re paved with it) so we presume it will be at the top of the list when that track smoothness data makes its way to us

The fact is that most of the strain that gets put on a NASCAR track comes from the corners. Concrete isn’t just a smoother surface, but it’s better at enduring the strain that is added to it when cars are navigating these banked hazards.

Asphalt gets chipped away more easily, which in turn makes the track more treacherous and harder to drive on. Asphalt is the all-important binder to the aggregate that makes up the physical bulk of the track. Up to 40+ monstrous brick-like NASCAR vehicles running over it repeatedly for several hours causes that binding to wear away, thus releasing the aggregate out onto the track, making the whole thing rougher.

What are the current Materials used on NASCAR Racetracks?

Although we have detailed above what a selection of tracks, where we can get the data,

are made of and how that impacts the smoothness of the race track it is easier to see how dominant asphalt is using percentages. So you can check that out below. ( subject to change as tracks are added and withdrawn of course)

Why Concrete Matters – A Closer Look

We have already briefly mentioned the reasoning for using concrete on NASCAR tracks, but there’s a bit more to it than all that. The use of concrete vs. asphalt greatly changes the dynamic of a race.

First of all, there’s the question of grip. Concrete wears down much more slowly than the binding of asphalt. At the Atlanta Motor Speedway, for instance, the track gets so rough because the bitumen used on the surface wears away much faster than other typical surfaces, which exposes the aggregate faster over time and can mean the grip dynamics changing within a single race.

Concrete, on the other hand, doesn’t require the drivers to worry as much about shifting grip. However it is at the start of the race is invariably how it will be at the end, and that means one less thing to keep track of.

Besides grip, another thing that pit crews like about the tracks with concrete is that it’s easier to keep track of because it’s also quite unaffected by temperature, unlike asphalt. Extreme temperatures have a marked effect on asphalt that make the job of pit crews much harder as they struggle to keep up with how it’s being impacted through a race on top of everything else they are monitoring. Concrete is more of a “reliable friend” in this scenario.

You can read more about concrete tracks here on our How Many NASCAR tracks are made of concrete article.

In its earliest days, stock car races were actually all done on dirt tracks. That may be hard to imagine when looking at the rather advanced-looking raceways NASCAR uses today, with their modern materials, wireless communications infrastructure, endless advertising and 100,000-strong capacity.

The shift from dirt to asphalt started when race organizers realized that their events were essentially being held back by the limitations of the surface. A more even paved surface would be far more conducive to an exciting motorsports event that more people would be interested in watching.

Darlington Raceway was the first of the NASCAR tracks to be paved, opening its doors back in 1950. From there, it soon became the norm.

Some racing fans might wonder why it is that NASCAR doesn’t simply put in place a regulation that says how tracks should be constructed. They would argue that it would ensure the best-possible quality of racing each time, and yet NASCAR has imposed no such rule, but why? It may sound like a good common-sense type of regulation, but in reality it would be an expensive and controversial nightmare.

The first result would undoubtedly be a portion of the tracks unlucky enough to fall outside of the new standard to have to tear up and replace their tracks – an expensive pursuit.

On top of that, it would make all the racetracks essentially the same, which in turn removes part of the challenge of NASCAR, which is teams working to adapt their vehicles to different tracks and conditions.

In Formula 1, the differences in the tracks and environments is a big part of what makes each season interesting and competitive, especially now that they’ve imposed new rules on how the cars are built. NASCAR also has similarly strict rules on car building, so that means competitive variation has to come from somewhere else.

One such source is the difference in tracks. to the extent that not only the surface is different, but with the introduction of the Chicago street race in the 2023 season, so is the layout of the track.

So it is clear that when people say NAScAr tracks are made of asphalt they are 4 out of 5 times going to be correct. However Concrete is the smoother, and more expensive, future and as more tracks look to renovations and improvements it is likely that this surface will be a more common sight in future NASCAR seasons.

Dirt is often used as a nod to days gone by, and although popular is unlikely to return as anything other than a special event race.

however, currently and for a good few years asphalt is what Nascar tracks are made of, with a huge 83% share of surface materials in current NASCAR race tracks.