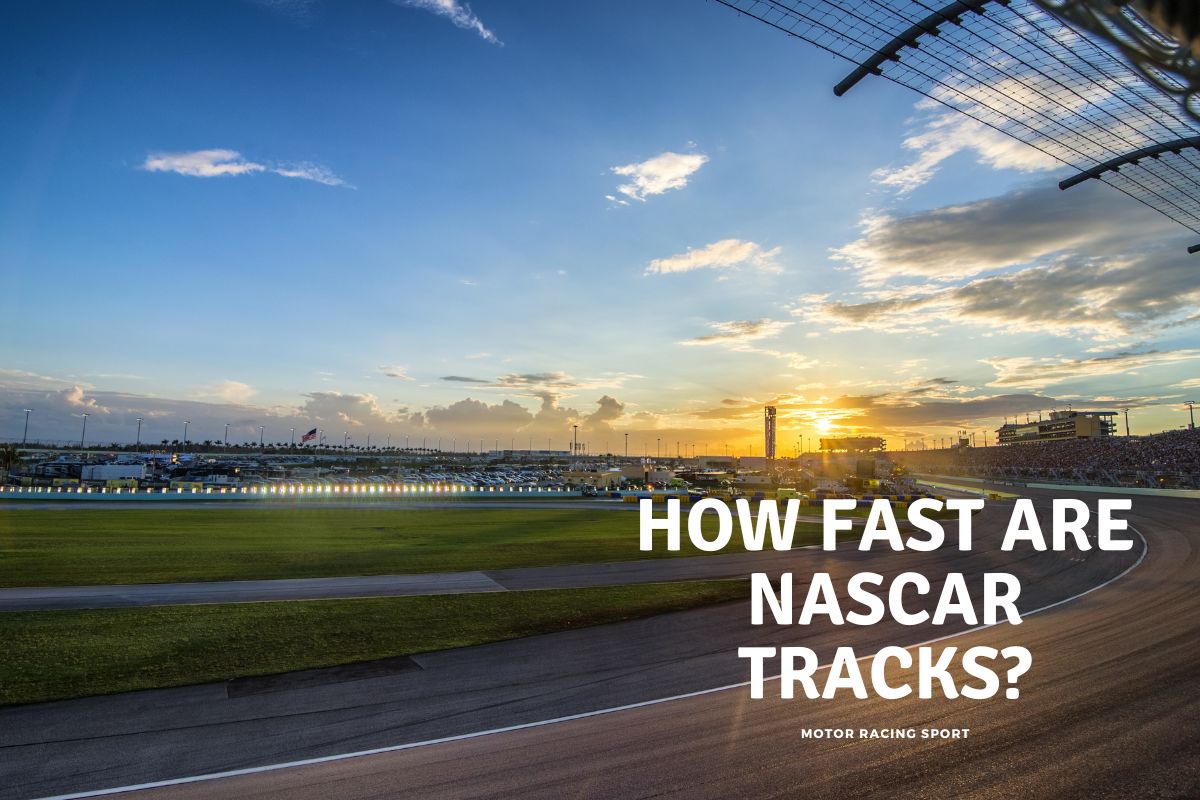 At first glance, it may seem as though NASCAR drivers at different events are going essentially the same speeds. If you mean that they’re driving far faster than is typically safe on any road or track, then you’re right, but their exact and average speeds actually differ quite greatly depending on the track they are racing on.

NASCAR tracks can achieve from 92 to over 200 mph. Top speeds are impacted by a combination of factors, like configuration, length, maintenance, and surface. Short tracks average around 120mph, medium ovals up to 180 mph, road courses 100 mph and superspeedways up to 200 mph.

We’ll be exploring which are the fastest NASCAR tracks, but also what makes them the fastest, and why it is that different tracks tend to generate different speeds from NASCAR drivers. The answers might surprise you.

What is the Fastest NASCAR Track?

While most people tend to associate the Talladega Superspeedway with the greatest speeds in NASCAR, it is actually the Michigan International Speedway that is now considered the fastest thanks to the antics of Australian driver Marcos Ambrose. In June of 2012, he shattered the previous track speed record by a whole 9-mph when he clocked an average lap speed of 203.241-mph. That was then broken again by Jeff Gordon in 2014 (more on that below).

In fact, before that day in Michigan, the previous fastest lap speed was at the Texas Motor Speedway where, in 2006, Brian Vickers set a record that wouldn’t be broken until Ambrose and friends arrived in Michigan on that June day in 2012.

What’s really interesting is that Ambrose may have been the top record breaker that day, but he wasn’t the only one, with 38 of the remaining drivers all breaking the same Texas record on that same fateful day in Michigan.

To be fair, this is only the case when you factor in the new reality of restrictor plates. The reason people associate tracks like Talladega with wild and crazy speeds is because before restrictor plates came along, it was also home to the all-time speed record set by Bill Elliott in 1987, clocking in at 212.809-mph. It was also, however, the site of many serious accidents, all contributing to the organization’s feeling that restrictor plates were needed which we have discussed in more detail in our how fast can a NASCAR go article on the site and the unrestricted speeds of NASCAR article.

We also have more information on NASCAR Speeds, both unrestricted and absolute top speeds in the articles listed below.

How Do Different NASCAR Tracks Compare for Speed?

Broadly speaking, the track types are configured as follows in NASCAR races, along with an example of each style:

So how do lap times compare on these different tracks? Beyond the pure track configuration, there’s also the question of distance, of course, which is why we look at both speeds and lap times when studying how fast NASCAR drivers go on different tracks. We’ll take a look below to see how different things can be.

Shorter tracks like the 0.5-mile tracks obviously breed much faster track times, with the shortest track being the 0.25-mile oval circuit at the Los Angeles Memorial Coliseum. The speeds reached, however, are not as high. At Bristol Motor Speedway, for instance, the fastest qualifying lap was completed in 14.528 seconds, with a top speed of 132.076-mph. The Martinsville Speedway is a bit slower, despite being the same length, with a best lap time of 18.845 seconds set by Ross Chastain on October 30th 2022 with an incredible NASCAR video game move on the last lap of the race when we went round the outside of turn 4 at full speed hitting the wall and beating Denny Hamlin for a place in the Cup Series Playoff final four championship.

Let’s compare that to longer tracks such as the 1.5-mile Atlanta Motor Speedway and Kansas Speedway. The time is longer, as you might expect, with the fastest qualifying lap in Atlanta clocking in at 28.074 seconds. The speed, however, is far higher than on the short tracks, with Geoff Bodine at Atlanta registering a speed of 197.478-mph.

Even when you factor in restrictor plates, it’s a lot faster. It’s the same story in Kansas, with the fastest lap at 27.304 seconds and the top speed at 197.773-mph.

Intermediate Tracks and Superspeedways – 1.5 to 2.5 miles

It’s within this category that one tends to find the fastest and wildest tracks. For instance, the Michigan International Speedway at an even 2.0 miles in length has delivered a fastest qualifying lap of just 34.857 seconds, but even more impressively a top speed of 206.558-mph set by Jeff Gordon in 2014.

These longer tracks, especially those with more even oval shapes with great banking for building up speed and momentum are the ones in which drivers tend to go the fastest, and is often why these are considered so high-profile and exciting during the race season. A little more distance tends to offer more opportunity to get that speedometer, climbing, well it would if they have them!

It’s not simply a case, though, that the longer the track is the more speed is built up. When you take it out to road courses such as the Watkins Glen International, for instance, you see that the top speeds drop, being lower than the 1.5-mile tracks, but higher than the 0.5-mile tracks at around 130-mph. The top recorded speed at Watkins Glen is 129.491-mph.

We also have an infographic with NASCAR Speeds and What makes a NASCAR fast you can share ( with credit) and use below. you can click on the image to make it full size.

What Factors Affect Speed on a NASCAR Track?

To wrap up, let’s look at some of the factors that impact how fast NASCAR drivers can go on the track.

One of the more unique aspects of a NASCAR track when compared to that of a Formula 1 track is the banked corners — the “tilt” of the track. Despite what some people say, this isn’t done purely for aesthetics, but rather for physics. Having a banked track, especially at places where turns are occurring, ensures that the drivers don’t go flying off the course, which they otherwise would do when trying to turn at that kind of speed.

Another key factor is paving, with higher speeds being achieved on tracks that have been recently repaved. Many records, such as the one we mentioned further above in 2012, were set in the period immediately after a track was repaved. Over time, NASCAR tracks get worn down, and the more worn they are, the slower they become. It is for this reason, too, that the fastest tracks or sections of tracks are often paved with concrete.

As we covered in the previous section, the overall distance of the track does affect how high a speed that a NASCAR driver can accelerate to, with intermediate and superspeedway lengths being ideal for reaching the pinnacle 200+ miles-per-hour speeds. Longer road courses can be slowed down in speeds because of the trickier shape of the track, and very short tracks don’t offer enough room to push the car to its limits.

As we highlighted above, despite the ongoing attempt to ‘make all things equal’ with the actual race car side of NASCAR, there is nothing equal between the tracks in NASCAR and the speeds that drivers race around is testament to that.

From 90 or so miles an hour on a Road course, to the over 200 miles an hour at Michigan or Talladega shows how different each track can be in a NASCAR season. it also shows the skill of these drivers to be able to change their styles and tactics on a weekly basis to deal with whatever the next track throws at them, be it a half mile dirt track, the streets of Chicago or a hell for leather run around the Banking of Talladega!