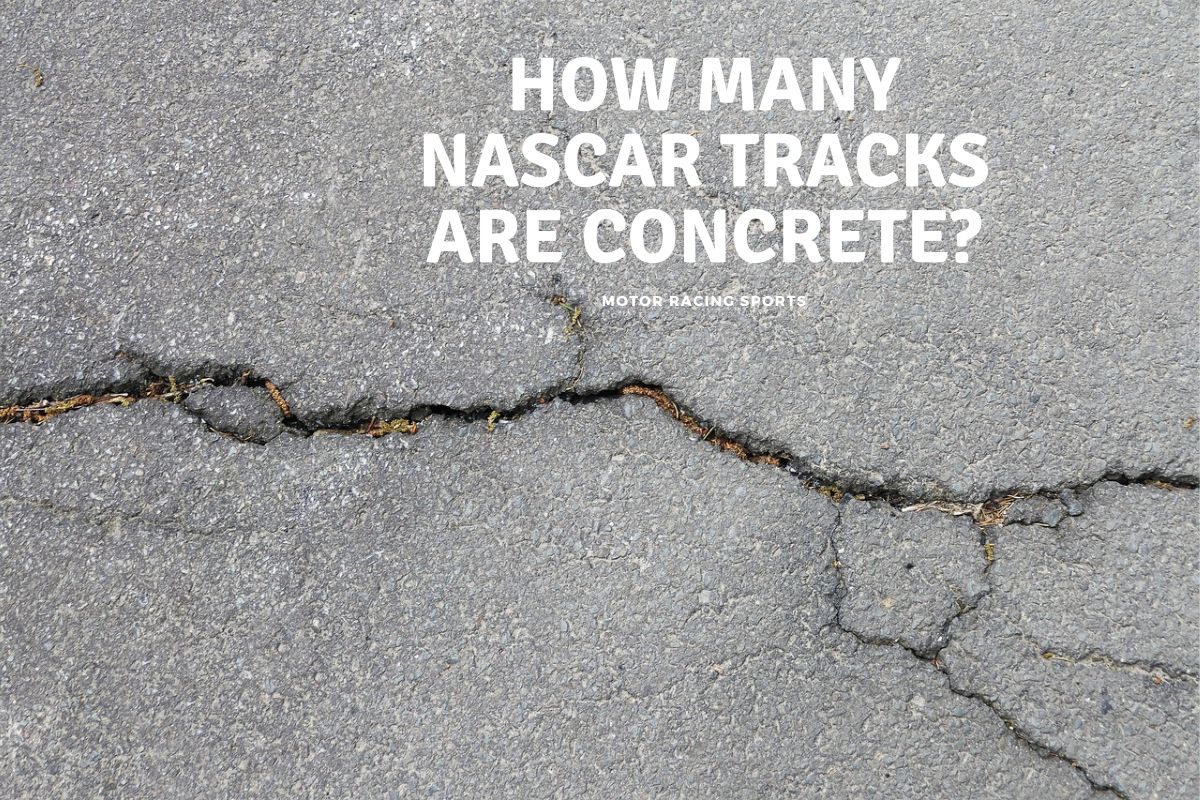 NASCAR tracks are a crucial part of the game, which is why their material matters. In this article, we will discuss the number of concrete NASCAR tracks and their effects on racing. Moreover, we will also shed light on the overall costs of concrete tracks.

In total, there are 39 NASCAR racing tracks, but none are similar. Each track has different characteristics and effects on the racing. The tracks are mostly made of asphalt or concrete because both are strong materials.

Two NASCAR tracks are made of concrete, while two partially contain concrete on their edges or corners. Concrete is long-lasting and does not get damaged easily; hence it is a more reliable track option.

The Nashville track is the longest among the other three concrete tracks as it is 1.33 miles long. Next is the Dover motor speedway, which is 1 mile long, the Bristol and Martinsville speedways are 0.533 and 0.526 miles long, respectively.

Concrete is made of small rocks, which require a binding agent to be used on racing tracks. The binding agent can be cement or a mixture of limestone and clay. It is poured and cured for a smooth finish.

Hence, all four concrete-containing tracks are durable and strong enough to hold fast racing cars. These tracks are loved by racers, too, because it is easier to drive on them and have less wear and tear on cars and are smoother.

Here is a table to help you better understand the names, materials, and lengths of concrete NASCAR tracks:

Concrete tracks are costly, so other materials are preferred for racing tracks. It is quite difficult to collect funds for fully concreted racetracks. Hence, there are only two concrete tracks. Since corners or edges of the racetrack get damaged easily when made of asphalt or other materials, NASCAR tries to use concrete, at least on the corners or the edges. However, most of the time, it is not possible due to the cost of concrete.

You must have noticed that almost all tracks are built with asphalt because it is cheaper, and only four tracks consist of concrete. Hence, even though concrete is a great option, it is mostly dropped due to high investment needed. Here is a pie chart to depict the number of tracks with asphalt, concrete, and dirt.

Effects of Concrete on Racing

Other than cost, concrete racing tracks also have unique features that affect the racing. Each type of track provides unique benefits to the drivers which is why every driver prefers their type of track for racing. Let’s discuss all the effects of concrete on car racing:

Concrete is naturally grainier, which provides a patterned surface, resulting in a stronger grip. Rubber molecules on the track produce a strong grip between the track and tires. The concrete track does not deteriorate with time. Hence, the grip remains the same for a long period of time.

Interaction With Light and Heat

As sunlight hits a concrete track, there isn’t a massive change in its characteristics. The grip of the track remains the same. On the other hand, an asphalt track releases oils during hot weather, which makes the track slippery. So, concrete tracks are perfect for racing on hot summer days.

Concrete tracks are smoother because they have less variance of micrometers. The drivers love these tracks because they do not chip off easily and endure the strain of the 40 cars travelling 400 miles at 200 miles an hour. .The track including the banked corners remain smooth for a very long time because it does not get damaged after a few years unlike asphalt.

The concrete track does not change with constant use, even for decades. It does not wear down easily and does not chip off. The drivers find concrete tracks more suitable for racing because it provides the same effects for a long time.

Which Track is Smoother, Asphalt or Concrete?

Concrete tracks are smoother and more agile than asphalt ones. Racing on concrete is quite easy, and drivers love these tracks, and so do their fans/ spectators. But NASCAR believes that a high sense of competition is achieved on asphalt tracks due to numerous factors involved.

Which is the Longest Concrete NASCAR Track?

Nashville Superspeedway is the longest concrete NASCAR track. It is a tri-oval-shaped track present in Lebanon, Tennessee. The length of the track is 1.333 miles which make 2.145 kilometers. It is not the longest track overall, but among the concrete tracks, Nashville effortlessly wins.

Is a Concrete Track Better for Racing?

Yes, a concrete track is a better option for racing, and the drivers widely love it. Since the concrete track has a smooth finish, strong grip, and minimum effect of the temperature, it is a perfect fit for racing. However, there are few concrete tracks due to their high cost.

NASCAR tracks play an important role in the performance of the drivers and cars during racing. There are a total of four concrete-containing tracks. They are excellent for racing as they provide a strong grip and smooth track. Today,we discussed all the aspects and number of concrete tracks in this article.