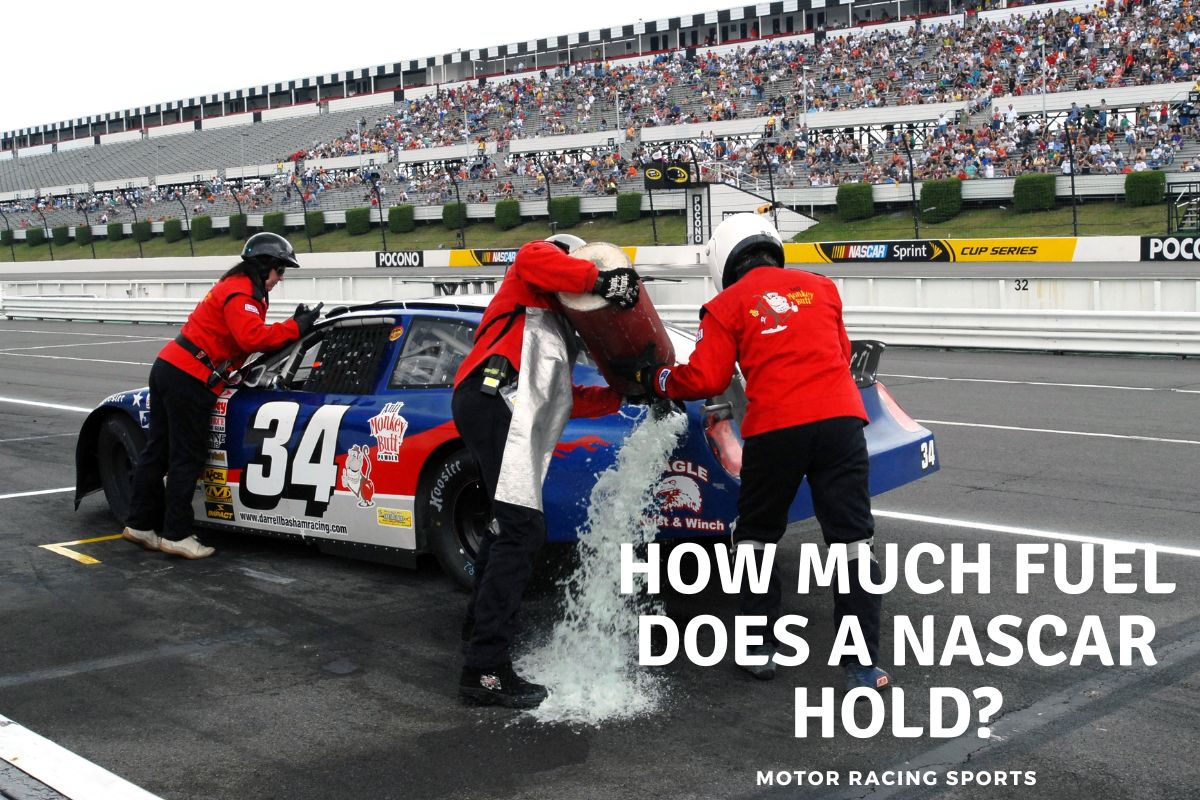 What do you think the typical gas mileage of a NASCAR vehicle is? Most estimates place an average of between 4.5 to 5 miles per gallon, so you’d think that NASCARs would be stopping over and over during a race to refuel no? The reality of fueling in NASCAR may actually surprise you more than you think.

The Current generation of NASCAR race cars have a fuel cell that can hold 20 Gallons or 75.7 litres of Sunoco Green E15 Fuel. Prior to the Introduction of the Next Gen NASCAR in 2022 the Race cars could hold 18.5 Gallons of Fuel or 70 Litres.

In this article we’re looking more closely at NASCARs, their fuel, and fueling in the sport more generally.

Background – What Fuel Do NASCARs Use?

Across all NASCAR series: Cup, Xfinity, and Truck, the fuel used is Sunoco Green E15 fuel. This was adopted as the official fuel of all NASCAR vehicles back in 2004, replacing the old 76 fuel.

The “15” in the name denotes that it contains 15-percent ethanol, which is widely considered a more eco-friendly material and helps fuels remain efficient while being greener.

The chief advantage of the Sunoco Green E15 fuel is its high 98 octane rating. This means that the fuel can withstand the enormous explosive pressure that is required to make something like a NASCAR vehicle go as fast and as powerfully as it does. We have more information on NASCAR Fuel in the Infographic below.

How Much Fuel Does a NASCAR Hold?

Up to 2022, the typical size of a NASCAR fuel tank was 18.5 gallons, but the next-generation cars scheduled originally to begin racing in 2022 will raise that to 20 gallons. The full status of the next-gen car is still somewhat in the air, however, following a number of key safety concerns and apparent design flaws, with many teams calling for a full reboot.

Therefore, for the purposes of this blog, we’ll stick to the 18.5-gallon definition since it’s the better known tank and gives a broader picture of races past and present.

As we’ll explain in the sections further below, however, it’s not possible for a NASCAR to hold enough fuel to get through any typical race, which means more equipment is required.

How is Fuel Monitored and Added During the Race?

NASCAR teams use carefully crafted formulas to determine how much fuel is being used during any given race. You might think the driver could just check a fuel gauge like in any normal car, but let’s not forget that we are not dealing with normal cars here.

NASCAR vehicles do not have fuel gauges, and so it’s not possible for drivers to know at a glance their current fuel status. But that’s probably a good thing, anyway, because drivers have a lot to focus on without getting distracted by their fuel levels.

NASCAR teams work together to ensure that the driver has all the information they need to supplement their observations on the track. This includes calculating how much fuel will be left in the tanks, and thus when a refueling stop will be necessary.

A rather strange fact in NASCAR is that teams don’t use more advanced automatic dispensing systems when it comes to adding fuel to their vehicles. Instead, they make use of specially made fuel cans, known as “Dump Cans.”

Dump cans are designed to empty their entire contents out in under 8 seconds, with each can holding up to 12 gallons of fuel, enough to fill about two thirds of a typical NASCAR vehicle, and just over half of a next-gen NASCAR vehicle.

Pit crews have to be specially trained not just to know how much fuel to put in the car and when, but also to safely put the fuel into the car while it is still running — every second counts and drivers don’t cut off their engines when making a pit stop.

The big refueling stops for NASCAR teams tend to occur in the first two stages during the green flag pit stops. They want to get as many laps in as possible in between these green flag stops without refueling, so they tend to add more fuel, often 1.5 cans, or a full tank.

Some drivers will attempt to save fuel by getting in behind their teammates and using the draft to try and help save fuel. There’s no data on exactly how much fuel such behavior can really save, but that doesn’t stop people from trying it.

In some ways it’s similar to the ways that drivers put up their hands to try and reduce the amount of air flowing in the cabin in an effort to boost aerodynamism. In their minds, even a negligible difference is still a possible clincher of victory.

Is It Possible to Finish a NASCAR Race on a Single Tank of Fuel?

Given that races can be 500 or 600 miles, it’s unthinkable that a NASCAR could finish any single race on one 18.5-gallon tank of fuel. The capacity simply isn’t there. As we mentioned above, some drivers do take steps to try and conserve fuel where they can.

The next-generation NASCAR vehicles add an extra 1.5 gallons of fuel capacity, but it’s unlikely to make a huge difference to the overall race dynamics. For the majority of the race, they will likely continue to fuel on similar patterns, but the additional 1.5 gallons could prove decisive when it comes to gaining an edge in the final stages of the race.

We have more article on NASCAR fuel in the List below.

Very often in the sport of NASCAR, small additions and changes can make a huge difference to race outcomes. So while the change from 18.5 gallons to 20 Gallons of fuel a NASCAR can hold, may not seem like much it may add a few laps of fuel, which at the end of a race may make the difference to being first and 10th!