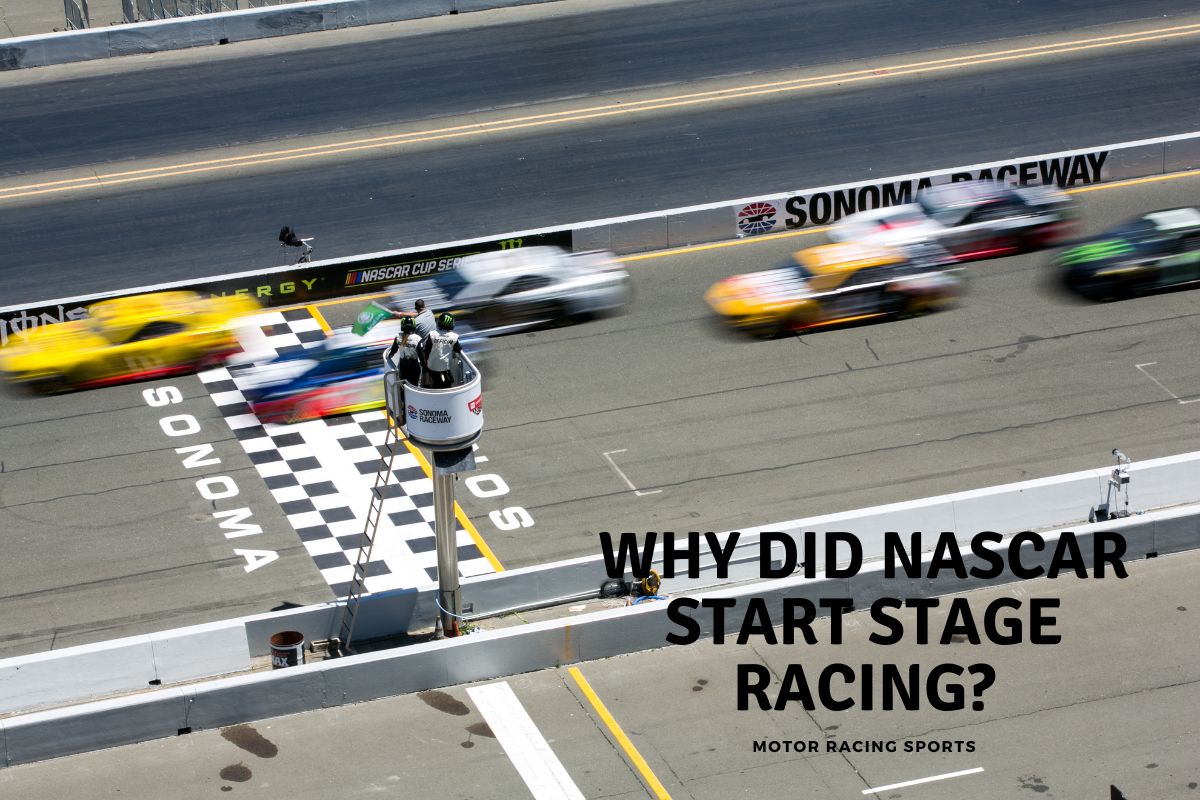 NASCAR racing did not always include stage racing. In fact, up until 2017, the race was all-out until you finished. Cars would pit when they could, hoping to get a caution so they could come in and get some fuel and new tires. Since 2017, the main three sections of NASCAR (cup cars, XFinity, trucks) all compete in races that have three stages per race, with a fourth stage being added into the longer Coca-Cola 600. But why did NASCAR start stage racing?

Stage racing was implemented in NASCAR to remove the chance of race domination by single race drivers. Stage points incentivize racing throughout the race and not just for the win and to offer more passing opportunities during the race. All with the aim of making racing both closer and more exciting a spectacle.

Experts state that there are a few reasons why NASCAR implemented stage racing.

Racing throughout the years has been exciting and entertaining, but as the technology in the cars improved and the drivers became better, the close racing of the past was lost in the smoke. NASCAR had to make some changes to ensure the survival of the sport. Let’s dig into these reasons a little deeper so you will better understand each of the those given about why NASCAR started stage racing.

Reasoning Behind The Start Of NASCAR Stage Racing

NASCAR has been a common household name for decades. There is nothing better than watching a close race from the comforts of your living room, except for maybe a viewpoint from the trackside. The more heated the race was, the better it was for all the racing fans. If there was a wild wreck or two, it was even better.

Stage racing was implemented to ensure those things were still part of the sport. The obvious reasons why this change was made in 2017 can be blamed on numerous things, starting with the most important.

The reasons that the stages were added to NASCAR racing all boil down to one thing. The closer the pack is together, and the more incentives they have to go for the lead, the better the entertainment will be for all the fans. This, in the end, brings in more money for the drivers, the teams, and the racetracks.

How Do The Stages Work?

The NASCAR racing stages are very easy to understand once you know how it works. There are points assigned to each stage, and then the points at the end of the race are added in. These numbers are all added together to give the number of points each driver has gained from the race. These points all go towards the playoff points, which either get them into the racing after the primary season or not, depending on actual race wins as well.

Each driver within the top ten of each stage will receive points associated with their placement. Stages 1 and 2 offer extra points for each driver, and the Coca-Cola 600, stage 3 also gives the same points. The final stages decide the race’s placement, giving them even more points.

Each driver will earn the points above for each stage that is not the final one. The end of the race offers more significant points, and each driver that finishes the race will get at least one point.

The points for the race

are all added together to give the driver and their team an earned amount of points for the race. At the end of the year, the drivers at the top of the points leaderboard move on to the playoffs, when wins are taken into account. Those who do not make the cut are left to prepare for the next racing season.

The reasoning behind the change in how the NASCAR races were set up all boils down to one thing. The more entertaining the races are, the more viewers they will get. More viewers mean more money for the owners of the cars, which in turn gives them more money to secure top drivers in their classes, which means more wins and more points.

It makes the race much more exciting because the drivers are not only pushing their cars to the limit to get the winning points at the end but to gain the extra points they can earn by placing in the top ten of every stage. The higher the rank, the more points they earn, which is reason enough for most drivers to race hard.