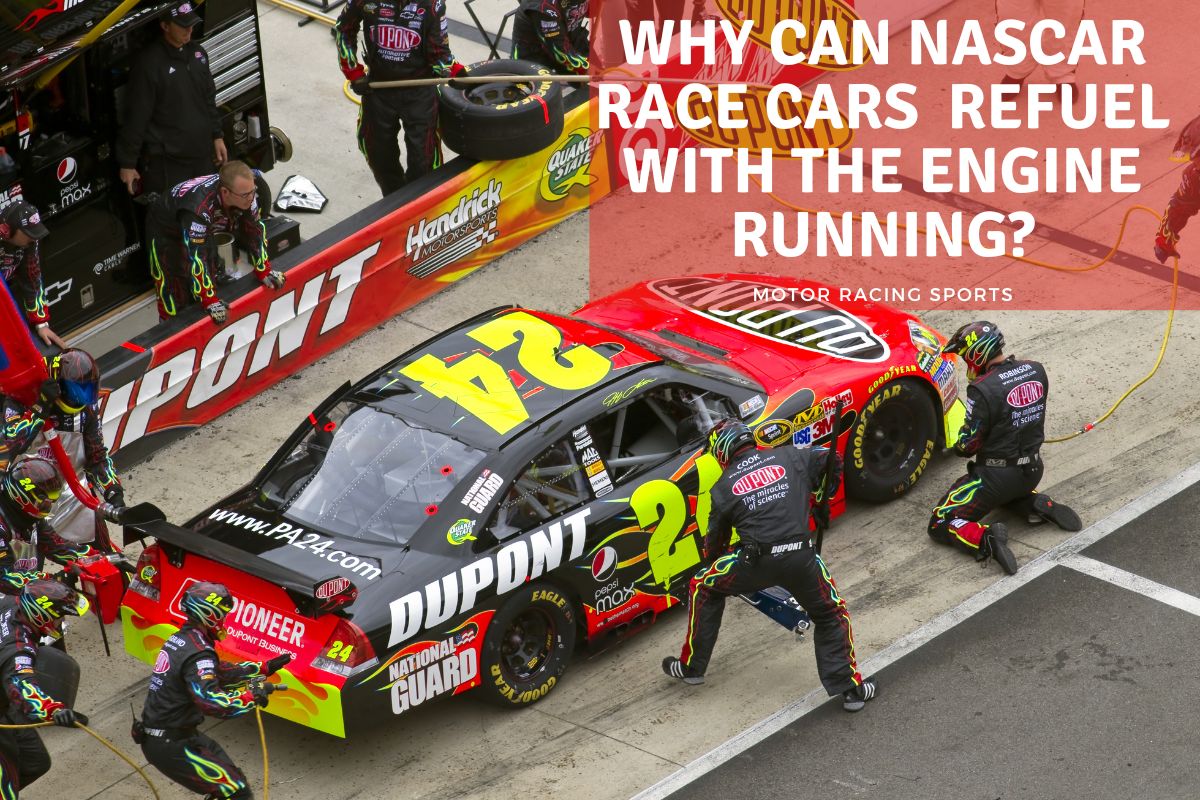 There are many, many things to be impressed by during any single NASCAR race, but one that people consistently point to is the efficiency and effectiveness of the pit crews when the cars come to a stop, brief as it is. In particular, there are countless people, even long-standing fans who’ve seen hundreds of races in the past, who are amazed not just at how fast the cars can be refueled, but at the fact that the cars can be refueled while still running.

All of us humble mortal street-legal drivers are told to no end that we must switch off our car before we start pumping gas. What’s more, we have all come to accept this rule as logical, given that the danger is gas fumes coming into contact with heat or a spark. So how is it that NASCAR vehicles get away with this? This will be the core question of today’s article.

Background: How are NASCARs Refueled?

NASCAR vehicles all have a standard sized gas tank of 20 gallons in the latest generation of cars. It’s about 2 gallons larger than the previous vehicles, which held 18 gallons. The cars are refueled during the race according to calculations made by the pit crew concerning how much fuel has already been spent and how much will be needed to complete the current stage.

When required, a pit crew will call in a NASCAR driver for a pit stop — probably for more than just refueling — and that’s when the team springs into its amazing action. Using a special 12-gallon fueling can known as a dump can, teams are able to quickly empty 12 gallons of fuel from the cans directly into the car’s fuel tank in less than 8 seconds. Not a full can is used every time, of course, as the team will calculate in advance how much fuel is required.

Even with the help of these fast-emptying cans, the task of fueling a NASCAR is not simple at all. Members of the pit crew responsible for refueling the cars have to be meticulously trained not only in the refueling process, but also in what to do if and when something does go wrong. Fortunately, accidents are extremely rare, but teams are always ready to react should anything go wrong.

We have a NASCAR Fuel Infographic with further information below for you.

Why Are NASCARs Able to Refuel While Running?

The main answer to this question is simple: timing. NASCAR races are won or lost on differences of hundredths of a second. When even every single hundredth of a second counts, you can’t afford to give yourself even the tiniest disadvantage. As far as a NASCAR team is concerned, switching off one’s car while refueling is one such handicap.

But in our introduction we mentioned the all-too-familiar warnings of gas stations everywhere, which is to turn off your car when preparing to put gasoline into it. So what gives? Why can NASCAR claim they’re in enough of a hurry to take the risk of keeping the engine running, but none of us in the real world can?

The first thing to remember here is that NASCAR teams do not do these things lightly. While they accept that there is a need for timeliness in delivering fuel to their drivers’ vehicles, they do take every precaution possible.

For the pit crews doing the fueling work, they wear protective fire-resistant clothing and aprons at all times, and other pit crew members are always standing by with fire extinguishers, ready to snuff out any spark or flame before it has a chance to engorge.

It’s also worth looking at the precautions NASCAR has taken over the years to make their vehicle’s fuel cells and gasoline systems in general much safer both during a race, in a crash, and when being refueled in a pit stop.

The NASCAR rule book dedicates a whole 4 pages to the singular matter of fuel safety, outlining in careful detail the requirements teams are expected to follow.

One might argue, however, that no matter how well trained pit crews are in the procedures, how good their safety equipment is, or how well constructed the fuel cell on the car is…when you’re trying to refuel a car at that kind of break-neck speed, nothing can really be safe enough.

To answer this, NASCAR officials and team leaders would doubtless invoke their level of training and expertise. Pit crew members do not get thrown into races as green horns. They are trained over and over again, under pressure, to reach the levels needed to maintain composure and professionalism during any race.

While keeping everyone concerned safe is priority number one, the organization also has a duty to its many fans to keep all races exciting.

A big part of that excitement comes from the tight race timings that persist through each round, keeping the contest open and thus keeping audiences on tenterhooks. What’s more, with so much at stake for the teams during any race, they aren’t going to surrender a single time advantage, no matter how seemingly small and insignificant it might seem to outsiders.

We also have additional articles on the site covering NASCAR refueling and Pit Stops which you can check out in the list below.

Even though stock car may appear in the names of the governing body of NASCAR it should be remembered that it has been a lot of years since a NASCAR race car can truly be considered a stock car. In a sport where time is quite literally money any time saving measures are going to be taken and embraced with both hands and that includes refueling during the race!

The speed and excitement of each pit stop is also part of that same exciting pageant that each NASCAR race creates for its fans. It’s all part of what makes NASCAR the unique and thrilling motorsport that it is, so we probably shouldn’t expect any changes in this aspect of the sport, they will jsut make sure they do it as safely as possible.