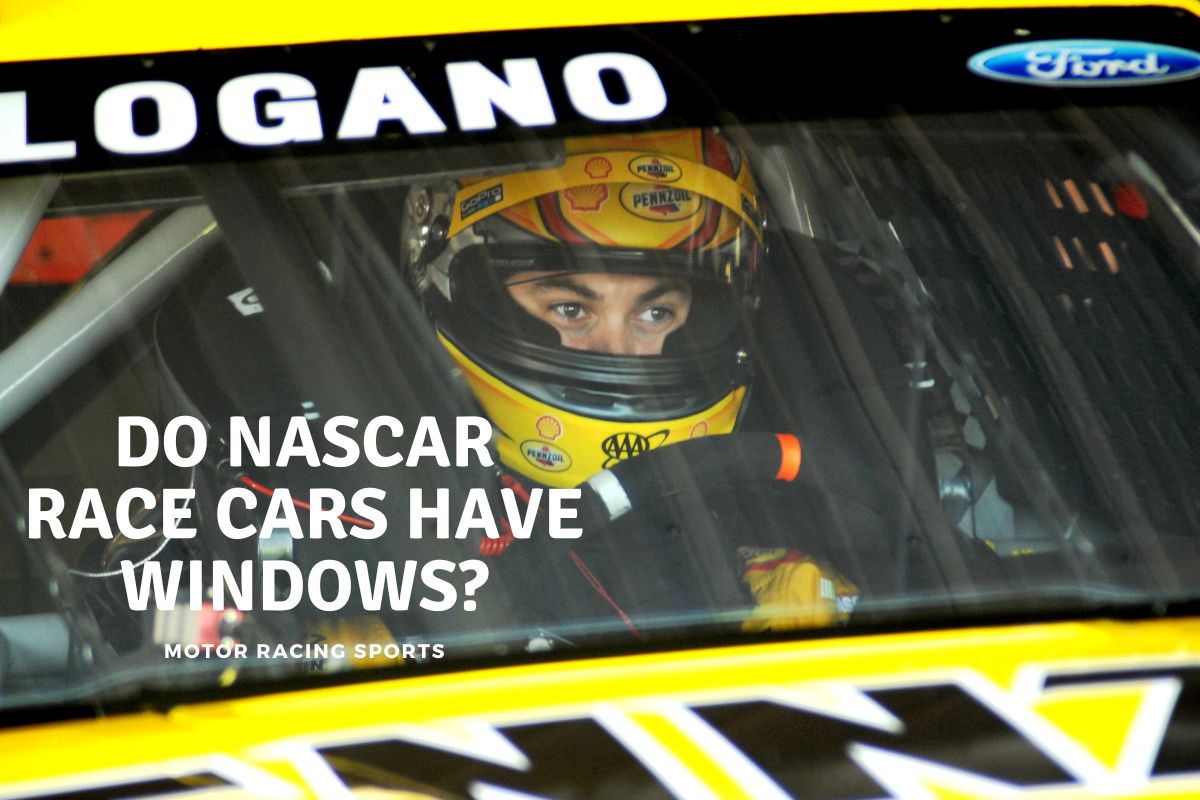 We all know that the cars we see on our television screens during a NASCAR race are hardly examples of “typical” cars like those we have in our own garage, but they do share at least some qualities. They all drive on 4 wheels and tires, for example, and they all have windshields up front. But when you examine a NASCAR vehicle more closely, you start to see that actually there are quite a few key differences — one of which is in the windows and other “glass” features.

NASCAR Race Cars have a Front windshield made of polycarbonate rather than glass. This is much lighter, tougher and more shatterproof than the road car equivalents. In place of side windows there is netting, and there is no rear window.

For one, do NASCARs even have windows? When just trying to guess from memory, you might end up assuming that they do, but the fact is that they don’t have windows, or at least not as we know them. They do have a windshield, but even that has some key differences, all of which we are going to explore within this article

Do NASCAR Vehicles Have Windows? Where? Why (Not)?

The short answer to the question is no…and yes. Let’s focus our attention more on the places where there are windows.

First, NASCAR vehicles do have a windshield that to the naked untrained eye looks and seems just like one that we would have in our own cars. The main difference between a real NASCAR windshield and a regular commercially made one is that the NASCAR windshield is far tougher and made from a synthetic resin material called polycarbonate.

The main reason for using polycarbonate is strength, but also for the key reason that it doesn’t shatter into potentially deadly sharp pieces if and when it breaks, unlike common windshields. Glass from even small chips in a regular windshield would get on the track and create hazards, but also present immediate dangers for drivers, and NASCAR is all about making these “speeding brick” cars as safe as they possibly can be.

In addition, polycarbonate is far lighter than traditional windshield material, which is another critical factor when you’re dealing with NASCAR vehicles that are far overweight compared to those in other motorsports like IndyCar and Formula 1.

A typical NASCAR is twice the weight of an IndyCar, so the NASCAR needs to gain every advantage it can from lighter materials. Despite being lighter, it’s tough, durable and malleable, and it’s what they use to make bulletproof glass.

There are no rear windows to speak of, but neither is there a front driver’s side window, either. What you’ll see here most prominently is netting, and in the case of some races, perhaps some driver’s hands attempting to fill as much of that open space as they can. We’ll come back to that point further below. The primary consideration in having no front driver’s side window is also about safety.

The primary safety concern is to do with escape from the car after a crash. After the 1970s, regular car doors were removed from NASCAR vehicles, no matter how much they look as though they have them.

These cars need to be structurally sound and strong, and having door cuttings significantly weakens that rigidity. In the first two decades or so of NASCAR racing, up to the 1970s, the cars had doors that were then welded shut to add rigidity. Nowadays it’s a single, seamless outer skin and solid structure.

The front driver’s window does have netting, but it’s designed to be easily removed, so that in the event of a crash the netting can first protect drivers from hitting their head on the exposed asphalt, but then be quickly and easily removed when it’s time for the driver to get up and get out of the vehicle.

If Richard Petty had had netting in his windows at Darlington, South Carolina, he may have been able to walk away from his crash far more unscathed. With no nets in place, his head hit the asphalt before finally stopping, knocking him out. He did survive, at least, but it prompted NASCAR to add window netting.

The secondary consideration is to do with air circulation. If NASCARs had closed windows, the interior of the car would have very poor air flow — there are no air conditioning units in these machines — and would leave drivers practically cooking alive in their suits. So, open windows allow more air from the outside to rush into the vehicle.

Of course, air rushing in would surely affect the aerodynamics of the car, which brings us back to drivers’ hands being held up to the open window space. What were they doing? Waving to the crowd?

Actually, what they were doing was using their hands to try and gain even a 0.5-percent advantage in speed by blocking some of the air flowing into the cabin in side the NASCAR Race car. They do say every little helps, but the science is still out on whether or not these drivers’ hands really make any difference.

There is still some debate and discussion as to how best to use this space. There are many who hold that there are more advantages to filling this space with a window, namely that it will help to make the cars more aerodynamic, and secondly that in the event that the car is involved in a crash, the lack of air flowing into the car from that side will help to keep it more firmly planted on the ground.

Both of these considerations are very important, but the other side to it is that at warm-weather locations where the heat will easily and quickly rise dangerously into triple digits, drivers need all the air flow they can get, and openings in the passenger side window help with that. It’s not like it makes the car “cool” per se, but it makes it at least bearable.

What generally happens with this window is that the hotter the race day is expected to be depending on weather and location, the more of the passenger side window is removed to allow for airflow. When that flow isn’t as necessary, then you’ll see more of a window on the passenger side to enhance protection.

While NASCAR Does not have windows in its race cars like their stock counterparts there is a polycarbonate windshield, and rear “windows” used to increase strength and reduce weight and shattered glass from inevitable crashes, bumps and scrapes.

Side windows have been replaced with Nets to enable drivers to exit the car if needed as there are no doors, or no working doors on NASCAR cars either.