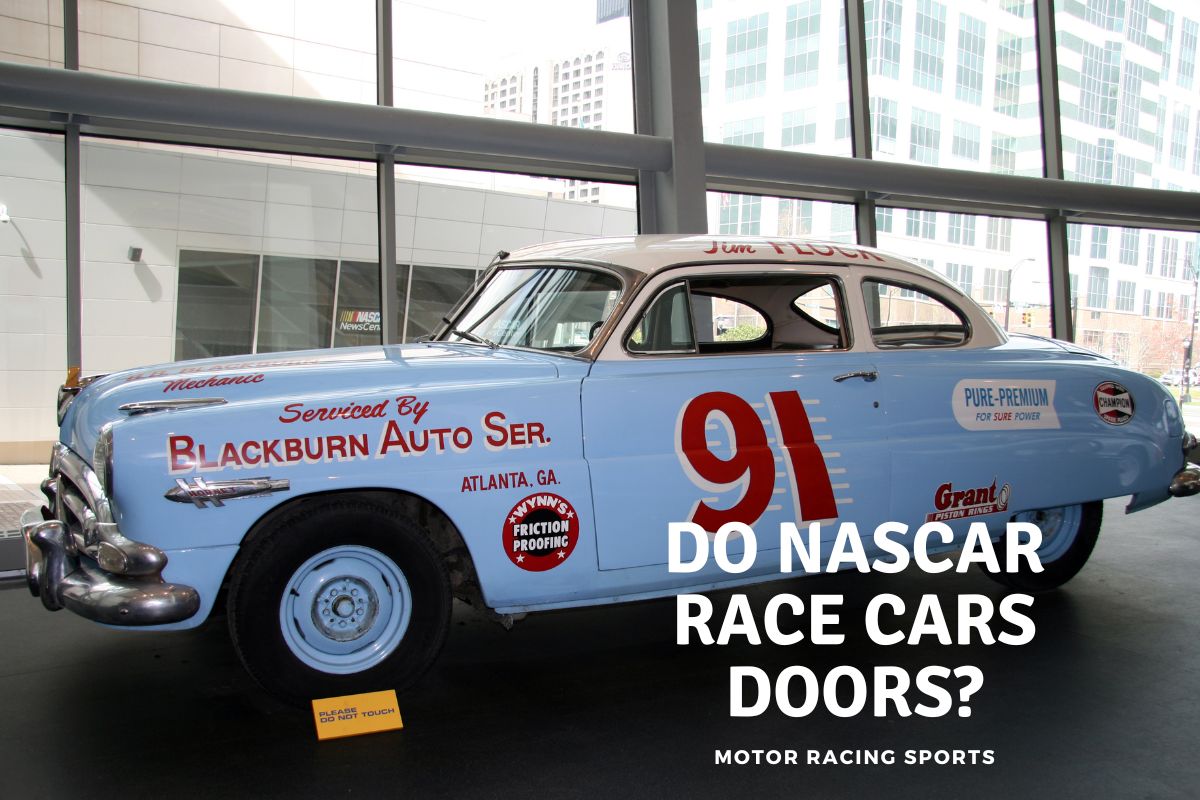 When asking about cars, it may seem like a silly question to ask whether or not they have doors…but NASCAR is the motorsport that just keeps on surprising. We are going to look into the presence — or absence — of doors on NASCAR vehicles, as well as offer up some explanations for the designs being as they are.

From the start of NASCAR until 1967 NASCAR race cars did have doors. However following the introduction of the second generation of NASCAR Race cars with a one body design doors were no longer part of the car. This change was implemented to give more structural strength to the Cars.

In the article below we will take a look at the reasons why NASCAR Race Cars do not have doors, or at least don’t have them now.

NASCAR Vehicles – Doors or No Doors?

The simple answer to the question is no, NASCAR Race Cars do not have doors. NASCAR Race Cars did have doors up until the early 1970s, but they were phased out owing to new car designs, safety concerns, and some other factors that we’ll explore in more detail further below.

When NASCAR first started back in 1949-1950, the rules about “stock” car specifications were very strict indeed, and included the stock car’s original doors, and its door handles. From 1949 to 1966, drivers drove their NASCAR vehicles with their doors firmly shut all the way around. The big change came in 1967 when the second-generation NASCAR design was implemented.

Second-generation NASCAR vehicles were to be built with a special focus on a one-body design, in theory to provide greater rigidity and thus safety for the drivers inside. However, cutting car door recesses into any car body is a fast way to greatly reduce that structural and physical integrity.

Moving to the second-generation vehicles starting in 1967 was important for other reasons. The fact that the car was made with a one-body design allowed engineers to include stronger and more comprehensive roll cages, which further augmented safety in the cabin.

As we all know, it would take further deaths and several more decades for things to get to the point we are at now where even serious crashes haven’t resulted in fatalities for a long time.

In the early days, doors always represented that same structural vulnerability, but the solution of teams and the sport of NASCAR was simply to weld drivers into their cars by sealing the doors shut.

Yes, it sounds like something from a James Bond movie right before they send the car off a cliff and into the ocean, but it was standard practice in those days. Welding created more of a unibody, which in turn meant a stronger and more durable car, in theory at least.

The biggest safety fear during any NASCAR race is for one or more cars to become involved in a multi-car pile-up. In the event of a crash, wouldn’t having good-quality doors to escape from be safer than a single-body car with no doors?

That’s the thinking of some, but many continue to argue against it, pointing out that damage to the doors can result in them becoming jammed and therefore impossible to open. Furthermore, it is also argued that it’s far safer for any driver looking to escape a crashed vehicle to simply make a bee-line for the windowless cavity rather than trying to operate the door.

Another safety concern when it comes to doors is that they might swing open during a race. This sometimes happened even back when the doors were being welded and sealed shut.

NASCAR is a close-proximity motorsports, where drivers are not afraid to get up close and personal with other drivers. Imagine the carnage that could potentially ensue should doors start flying open, sparking knee-jerk swerving of other drivers, and potentially a more horrendous pile-up than anything previously seen.

It’s not only doors, of course, that are distinctly missing from the typical NASCAR. As we touched on above, there are no windows — or very nearly no windows — in these cars, with sometimes just a partial window on the passenger side, and the polycarbonate windshield in place.

The lack of windows is partially to make a post-accident escape all the easier for drivers, as well as improving the overall airflow into the cars.

Besides windows, another feature close to the doors that’s missing is the side mirrors. Of course, these can’t be placed there for the potential distractions that they can create for the driver, but also since protruding mirrors can be dangerous in a similar way to doors suddenly swinging open.

Finally, there are no headlights or brake lights on NASCAR vehicles. The primary reason for not including them is that they aren’t necessary on a properly lit track anyway, but also that they present a significant sharp debris hazard should they get broken during a race.

What’s more, if drivers were using headlights or brake lights, there’s a chance they’d create possibly lethal distractions for drivers both in front of them and behind them.

The fact is that NASCARs will always be that much different from the cars we regular joes drive on the street each day. They may look like highly powerful regular cars covered in ads, but nothing could be further from the truth. These cars are extraordinary in more ways than one. Just don’t go reaching for that door handle.