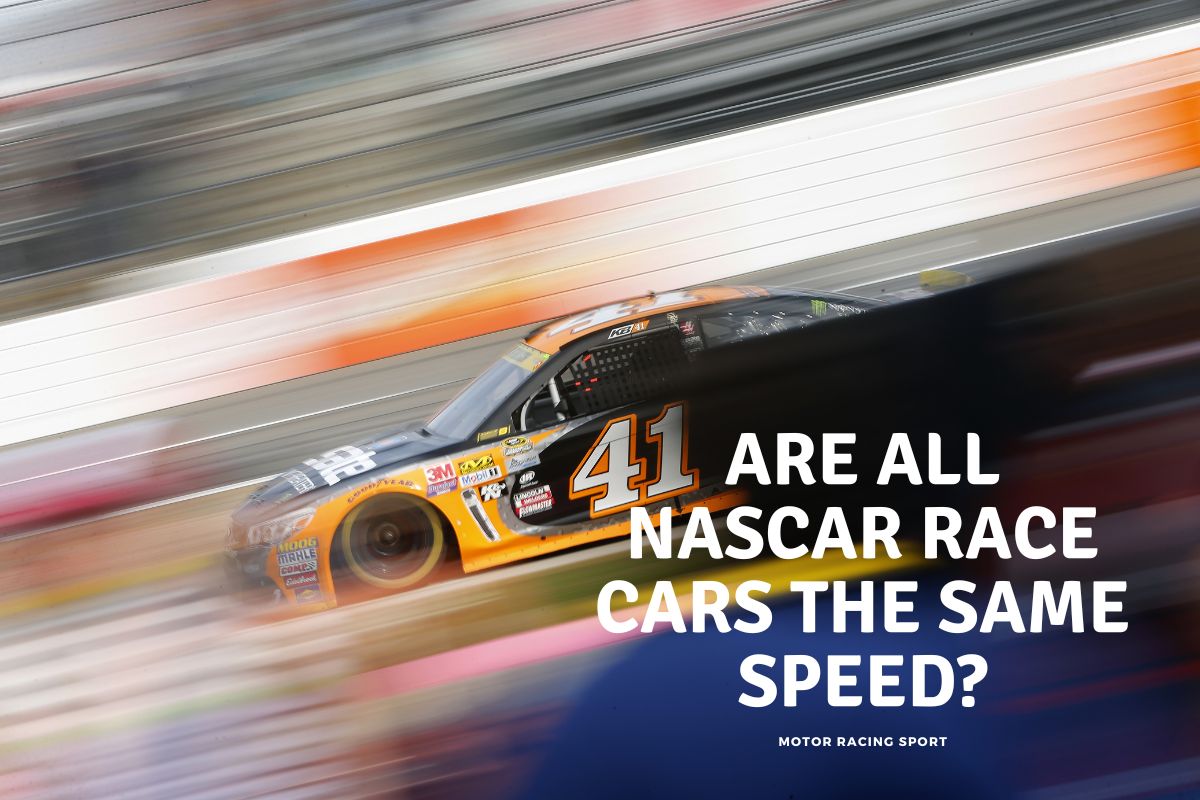 Everyone knows that NASCAR race cars are fast, but what other secrets do these cars hold when it comes to power and speed? Each team must have their own little secrets and tricks to make their own cars go faster, right? In this article, we’re going to be talking about NASCAR speed and whether or not all NASCAR vehicles in fact share the same top speed, and why that might be the case.

NASCAR Race cars are not all the same speed. While NASCAR race Cars are engineered to be of a similar performance and power to encourage competitive racing, teams can adjust cars to obtain advantages in power, acceleration and grip within NASCAR rules to best suit the track and conditions they are racing on.

Although it can appear that all NASCAR races cars are cookie cuttered from the same design, and there is some truth in that, there are adjustments and changes teams can make to get the best out of their cars and we will take a look at some of these in the sections below.

What is the Top Speed of a NASCAR Race Car?

When you look at the average speed records for various tracks on the NASCAR circuit, you quickly discover that these vehicles are capable of eye-watering speeds. While on some short tracks the top speeds on average stay within 150-mph — fast enough, most might say — they get up to well over 200-mph on medium-length and longer tracks of 1.5 miles or more.

Without factoring in the rules on restrictor plates brought in at the start of the 21st century, the fastest lap ever recorded by a NASCAR driver was Bill Elliott reaching 212.809-mph at the Talladega Superspeedway back in 1987.

The Alabama track was infamous at the time for hosting the fastest, wildest races, some of which ended in spectacular and potentially deadly crashes. Even since restrictor plates were put in, top average speeds on many tracks have continued to exceed 200-mph.

Is This Top Speed Shared by All NASCAR Race Cars?

In short, yes it is. What’s important to remember about the way NASCAR works is that it’s meant to be a race of “stock cars.” This strongly indicates that all the cars on the track should share most, if not all, the same basic mechanical DNA.

While each team is allowed to bring their own engineering to bear on each car’s engine design, they can’t go outside of NASCAR rules, which clearly state that cars can not be engineered beyond 510-hp on superspeedways (namely Daytona, Talladega), and not beyond 670-hp for intermediate and short tracks and intermediate tracks.

Daytona and Talladega are special in their superspeedway status, and are both notoriously huge and fast oval tracks covering more than 2 miles. Short tracks are less than 1 mile in length, and intermediate tracks anything over 1 mile.

Speeds on the shorter tracks tend to be a little more restricted, mostly because the drivers don’t have the distance or space needed to build up a speed of 200+ miles per hour before having to slow and maneuver. You do have that facility on a larger, longer track.

The most important factor here, though, is the rules governing the cars themselves. If you took away the more recent limitations, then a typical NASCAR engine is capable of delivering up to 900-hp, helping launch the car up to speeds of 240-mph. What is mechanically possible and technically allowed within the rules, however, are not the same thing.

We have a couple of articles on the top speeds of NASCAR on the site that might be of interest as well. We have listed them below for you.

Why Do NASCAR Vehicles All Share the Same Top Speed?

A Sport of Skill and Talent Needs a Level Playing Field

The primary reason for NASCAR being so strict on things like top speeds, horsepower and engine capabilities is to help make NASCAR an interesting and engaging sport for fans, in which those competing do so on a more level playing field.

NASCAR officials are undoubtedly familiar with what has happened in recent years to other motorsports, most notably Formula 1, where a single team can dominate the sport because of technical and financial advantages over others.

How interesting was it, watching Lewis Hamilton winning race after race after race, and then witnessing the same predictable podium ceremonies and season scores emerge?

By ensuring that all cars run with the same limitations on speed, the race becomes far more about individual driver skill on the track. When the mistake of one driver costs them a few horsepower, another skilled driver can take advantage of that and get ahead.

That’s a more thrilling and engaging sport, at least according to NASCAR. Even F1 is now imposing greater restrictions on the technical specifications on cars, in the hope of also mixing things up and making their own sport less predictable.

Another key factor here is safety. It may sound somewhat counterintuitive to think that capping a top speed at 200-mph or so is done for any kind of “safety” measure, but in fact it is. As we have already pointed out, these cars when unrestricted could take their drivers up to 240-mph in theory. Even keeping it lowered to the great heights that it is helps to ensure that drivers have a far better chance of keeping themselves and their vehicles intact as they struggle for victory.

What Gives a NASCAR Vehicle Its Speed?

As we’ve touched upon throughout the blog piece, the source of the power and speed of any NASCAR vehicle is its powerful engine. In particular, there are two qualities in particular about the engine that help NASCARs gain such fantastic speeds on the track, namely fuel and tuning.

The main fuel used by NASCAR teams in their vehicles is called Sunoco Green E15, a gasoline-ethanol mix designed specifically with a 98 octane rating that helps it to withstand great compression before detonation. We have a couple of articles that go deeper into the advantages that Sunoco Green E15 fuel brings to NASCAR in the articles listed below.

Most street cars use 88-octane fuel, but such material would not deliver the desired effect in a NASCAR engine. When using 98 octane fuel, a NASCAR team and their drivers can achieve a better rate of fuel flow, which in turn delivers more impressive explosive power and thus greater speeds.

Next, the majority of car enthusiasts will be aware that what makes an engine truly capable of delivering power and speed isn’t just its displacement or number of cylinders, but the way it is tuned. The practice of “engine tuning” refers to adjustments made to the engine mapping computer software connected to the engine’s ECU.

Engines can be tuned to deliver any horsepower rating within its overall capacity, which in the world of mass auto production is what allows OEMs to sell cars and trucks with giant V8 engines that are still street legal.

NASCAR teams use a very specific software to tune their car engines, right down to each individual cylinder. This is what helps the car to reach its impressive — though still limited by the rules — power ratings and top speeds.

We have an infographic linked on the picture below that helps explain NASCAR Speeds better, and shows how NASCAR Race cars are not the same speed.

Now if rubbing is racing, then not cheating isn’t trying, or something alone those lines. Teams will try to work to the very limit of the outside line of NASCARs rules and regulations and on the odd occassion they do cross over.

NASCAR has a system of both random and scheduled checks on cars after races to make sure that any adjustments made do follow these rules and have not given any unfair advantage to teams. if teams are found to have crossed these lines then there are strict penalties enforced, from points deductions and fines, to race suspensions or pit lane suspensions for teams.

These penalties can change as seasons progress and we have an article with a table on NASCAR penalties for you to check out for more details in the link below. however we include the relevant ones attached to tuning / performance here.

NASCAR has three levels of penalties L1, L2, and L3 which go up in order of severity. The ones relating to Engines and adjustments (including parts) are we have listed some examples of each level below. As we mentioned we have a more indepth penalties article on the site linked above and below.

Example Infractions: Parts acquired from outside sources, weight of car issues after racing, unapproved parts prior to racing

In a sport where every point matters these rules are taken seriously, and there are plenty rules and regulations covering intrack behaviour as well, which with cars racing so close together, and tempers flaring are as essential.

However, the line is the line and plenty of teams dance around it trying to get as much speed from their NASCAR race car as possible, as if all NASCAR race cars were the same speed there wouldn’t be 100, 000 fans watching at race tracks and 3 million watching at home each week!

NASCAR Race Cars are not the same speed week in week out. Differences in tracks, car set ups, and the changes they are permitted to make depending on that track, or the conditions they are racing in, makes some cars faster and slower.

However they are designed and engineered to be similar speeds, to encourage close and competitive racing, this makes NASCAR much more a battle of driver skill than of deep team pockets or engineering. The changes that are permitted call for a much higher level of engineering skill when the problem, or advantage has to be gained by clever engineering rather than a large wallet!