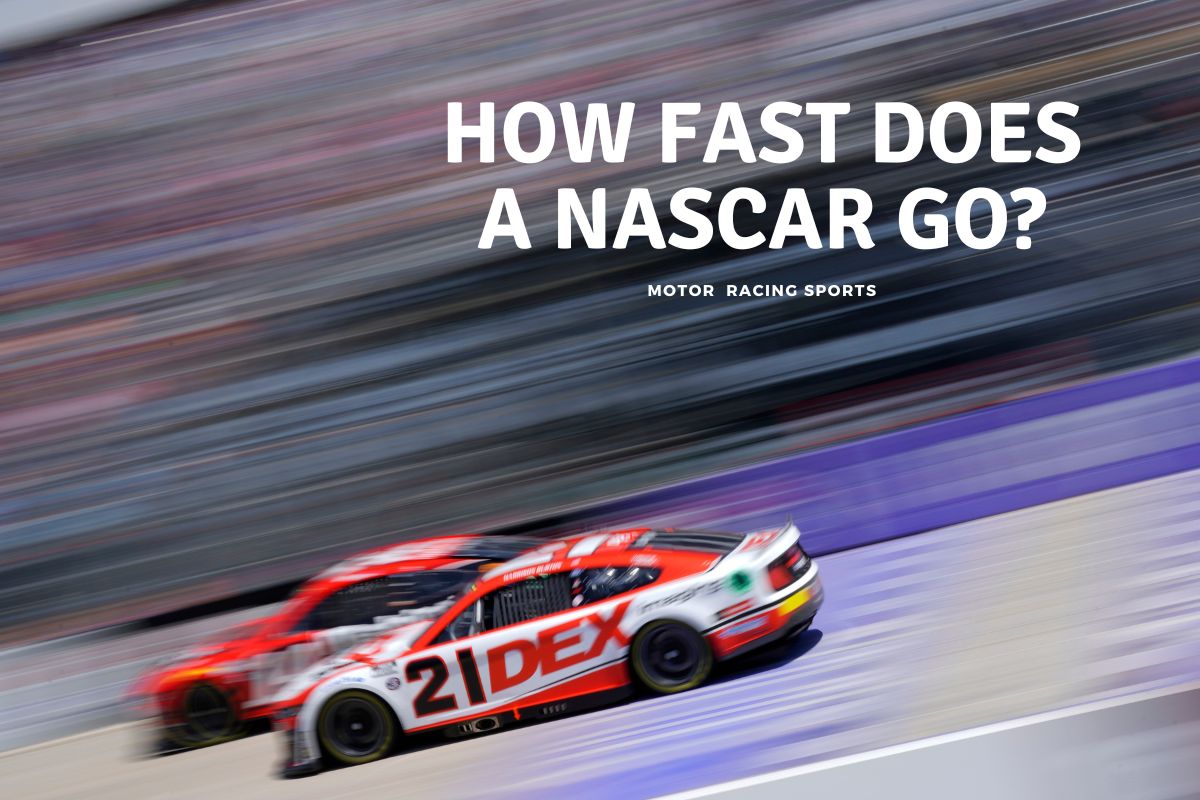 NASCAR speeds have been creeping up in the 70 years of the sports history. To over 200 miles an hour in the 1980s, Though they fell back after the introduction of Restrictor plates after some horror crashes like Bill Elliots in 1987. They appear to be on their way up again, and although not reaching the 213 miles and hour, or 240 miles an hour they reached at that time, 200 miles an hour is once again in range.

How Fast a NASCAR Race car goes is dependent on the type and length of a track. On Superspeedways NASCAR Race cars have reached 212 mph and 240 unrestricted, while road courses with their many turns produce averages of 70-80 mph. However, NASCAR has reached 271 mph in a straight line On Utah salt flats.

NASCAR Races are high octane, breakneck speed affairs, and although clearly fast the answer to the question how fast does a nascar go is not answered as easily as just providing a number. ( don’t worry we do that too) It needs to be looked at in a little more depth with different tracks and conditions producing different speeds.

We take a look at the seemingly simple question how fast does a NASCAR go in the article below, and look at the reasons why this may not be as simple and answer as it first looks.

How Fast Does A NASCAR Go: Track Statistics.

Although we will explore in more detail in the sections below the different speeds, and reasons for them, at the different track types we have an average speed that a NASCAR does go on these tracks in the table below along with the top speeds.

We have taken these from the the last 30 or so years of NASCAR racing, although in the past, previous to restrictors and Hp limits NASCAR could achieve more than these speeds.

Table 1: How fast can a NASCAR go on different Tracks Both Top and Average Speed

As you can see from the research above there is large differences in the speeds a NASCAR can go, both as a top speed and as an average speed throughout the race, depending on the track type and racing surface (dirt in particular)

We will go through these individually below to examine the reasons why a NASCAR does go the speed it does and also look at the average speeds on two types of tracks ( oval and road) across the three main motorsports, Formula 1, NASCAR and IndyCar to try to see which actually has the fastest average speeds

How Do Different NASCAR Tracks Compare for Speed?

Broadly speaking, the track types are configured as follows in NASCAR races, along with an example of each style:

What is the Fastest NASCAR Track?

While most people tend to associate the Talladega Superspeedway with the greatest speeds in NASCAR, it is actually the Michigan International Speedway that is now considered the fastest thanks to the antics of Australian driver Marcos Ambrose.

In June of 2012, he shattered the previous track speed record by a whole 9-mph when he clocked an average lap speed of 203.241-mph. That was then broken again by Jeff Gordon in 2014 (more on that below).

In fact, before that day in Michigan, the previous fastest lap speed was at the Texas Motor Speedway where, in 2006, Brian Vickers set a record that wouldn’t be broken until Ambrose and friends arrived in Michigan on that June day in 2012.

What’s really interesting is that Ambrose may have been the top record breaker that day, but he wasn’t the only one, with 38 of the remaining drivers all breaking the same Texas record on that same fateful day in Michigan.

To be fair, this is only the case when you factor in the new reality of restrictor plates. The reason people associate tracks like Talladega with wild and crazy speeds is because before restrictor plates came along, it was also home to the all-time speed record set by Bill Elliott in 1987, clocking in at 212.809-mph. It was also, however, the site of many serious accidents, as we mentioned, all contributing to the organization’s feeling that restrictor plates were needed.

We have an infographic that has NASCAR speeds in a bite size format. Clicking on the image will make it bigger.

How Fast Does NASCAR go on a Oval Race tracks

Not all oval tracks are equal and they come in different lengths, different banking, and even different surfaces so in the table above we took an example from each length to research the speeds, both top (often qualifying) and average race speeds they do on each track type. You can see the results both in that table and read more information on the reasons why below.

How Fast Does NASCAR go on Short tracks

Short Tracks in NASCAR are defined at a mile or less long. The shortest of these, mainstream tracks anyway, are the tracks at Martinsville and Bristol at around half a mile long each. The shorter of these, Martinsville, is where we took our speeds from.

How Fast Does a Nascar Go On a Mile Long Oval

Although 1.5 mile long tracks are the most commonly used in a NASCAR season the mile tracks are important to highlight as they demonstrate how much length is important to NASCAR speed. Mile long tracks like, Dover, are still considered short, but the added length makes a dramatic difference to both top and average race speeds. NASCAR really does go faster here.

how fast does a nascar go on a Super speedway

The Superspeedways are the longest oval racetracks in NASCAR, made famous in particular by Daytona, the Biggest of the NASCAR races, and Talladega the longest track. These racks are 2.5 miles plus in length and allow cars to both hot maximum speeds, and maintain them.

How Fast Does NASCAR Go On a Road Track

Despite being one of the forms of motor racing that actually ( on the surface) look like Stock model cars, NASCAR is not as fast on tracks with lots of corners like road tracks – Sonoma, CITA, and The Glen – ( and soon to be street circuits like Chicago) They are heavy machines suited for maintaining fast speeds more so than cornering on a dime.

How Fast Is The Straight Line Speed of a NASCAR Race Car?

In an race of acceleration a NASCAR will trail at the back between an F1 and an IndyCar open wheel racecar. These are made for fast acceleration and tight corners, especially an F1 Race car. However, line them up on a salt Flat and something unexpected would happen as they all power along this flat surface.

We go into more detail on the absolute top speed of all three cars in the next section, but for the moment the top speed ever recorded in a NASCAR is 271 miles an hour. So bear with us as we think this is such an incredible speed we mention it again below!

It is actually difficult to compare like for like speed of these three motor racing sports. The closest we can come to is the Road Race circuits they all race on. However, even then they are designed for different purposes.

Open wheeled race cars like F1 and IndyCar are more suited to tight and fast cornering than their heavier NASCAR competition. They are anything but the stock models found in NASCAR and while all are designed for racing it is clear that the pure racing of IndyCar and F1 allow them to hit blistering speeds as well as take corners at maximum speeds.

or so it seems. When you look at the fastest top speeds of these cars, taken on salt flats ( with the exception of IndyCar which we were not able to find a salt flat time – feel free to drop us a line if you know of one) NASCAR Car race cars, with limited modification, have achieved the fastest times.

of Formula 1 (wind assisted) and a 257 ( reportedly) in an IndyCar ( again reportedly at michigan).

While both IndyCar and even more dramatically F1 may be fastest around road courses, and Ovals as you can see from the table below, the fastest speeds capable of all Racecars is currently achieved by a NASCAR race car.

The NASCAR unrestricted speed was achieved in 2018 at the Bonneville salt flats in Utah and we have more details on that here on the site in the link above. it was achieved by Retired NASCAR Driver Bob Keselowski behind the wheel of a Dodge Charger. While most of us want to relax after we retire it doesn’t seem that NASCAR drivers follow that trend. You can see what other NASCAR drivers do in retirement here as well.

We also have more articles on NASCAR speed on the site that discuss how fast can an unrestricted NASCAR go, if they are the same speed, and how much tracks impact NASCAR speeds which you can check out on the list below.

NASCARs can, have and do achieve speeds of over 270 miles an hour in a straight line. However these are one off showcase events. In Week to week racing how fast a NASCAR goes depends not only on the length of track but also the configuration.

On Oval race tracks over 1 mile thay can reach 160 miles an hour plus, and on Superspeedways this increases to a 188 average to 212 top speeds and on road courses with their many corners it drops to around a maximum of 100 to a race average of 70-80 miles an hour.

So while cornering speeds may go to the lighter more nimble F1 and IndyCar race cars, that brute strength and power at the top end of speeds for Race Cars is help by NASCAR.

We can’t help but feel that this is as it should be.