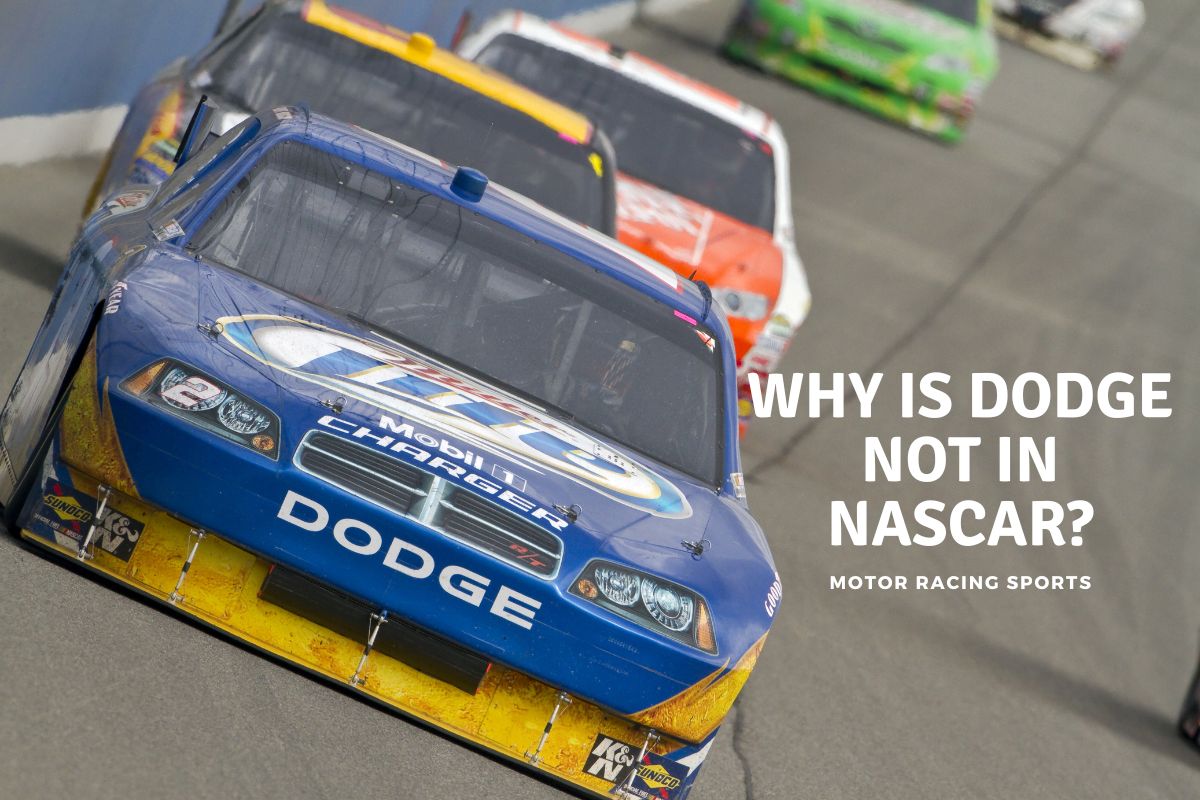 It’s common knowledge that there are three manufacturers involved in NASCAR: Toyota, Ford, and Chevrolet. But long-time fans of the sport also know that this was by no means always the case. Indeed, until 2012 there was another manufacturer in the mix, namely Dodge. So what happened to Dodge? Why are they no longer in NASCAR? What happened to take them out of the running? These questions and more we will explore in today’s article.

Dodge appeared in NASCAR Racing until 2012. Winning 260 times in their history. Dodge leaving NASCAR racing was caused by the departure to Ford of the successful Team Penske, an inability to find a new competitive team, and the viability of running a NASCAR team during a period of takeover and cost cutting.

We take a look at the details of these factors in more detail below.

When Were Dodge in NASCAR?

What some may find interesting is that Dodge had actually left and come back to NASCAR before. In the earliest days of NASCAR, Dodge wasn’t just one of the manufacturers, but arguably the dominant force. Their more famous car was the Dodge Daytona, which savaged opponents for years with its impressive rear wing, but most importantly its hemi engine that was the real secret to the team’s success.

In fact, the hemi engine was so successful that NASCAR ended up having to ban it for apparently being too much of an edge — they ended up banning the rear wings, as well. Dodge later took its first hiatus from the sport, returning triumphantly in 1999, after which time they were best known for working with Team Penske.

After rejoining the sport in 1999, the team enjoyed much success with its flagship team, and even managed to keep the racing activities going in all three NASCAR competitions (Cup, Xfinity, and Truck) through the financial difficulties of their parent company Chrysler and the Great Recession in 2008.

Dodge was eventually acquired as part of Chrysler in a deal with Fiat which saw the creation of FCA. Since then, of course, FCA has since merged to create yet a larger entity, Stellantis, which still holds ownership of both Chrysler and Dodge.

Despite skilfully remaining in NASCAR during the world’s worst economic crisis since the Great Depression, and continuing to stay in the sport while its own parent company was involved in major negotiations with buyers that would ultimately create unprecedented restructuring and other internal changes once complete, eventually enough was enough.

Dodge announced that it would leave the sport at the end of the 2012 season, chiefly citing the departure of their flagship team, but also considering the specter or new corporate overlords who were not so appreciative of how big a deal it was to be a part of NASCAR. We’ll get into those reasons for departure in the sections below.

And so it was, that after some 260 or more wins in the Cup Series over the many decades of involvement in NASCAR, Dodge were seemingly gone for good.

Why is Dodge Not in NASCAR?

So, what happened? Why did Dodge pull the plug on their incredibly successful NASCAR operation? There are three main areas that explain this,

We take a look at these in more detail below.

For many, the moving of Team Penske from Dodge to Ford was the watershed moment for Dodge in NASCAR. It was more than just a loss; more than even a harmful body blow; it was a cut to the jugular of the team’s viability in the entire sport.

The saddest thing for the many fans of NASCAR and Team Penske’s involvement with them was that there was a chance for Dodge to sign a new deal with Richard Petty Motorsports to bring them back into the fold from Ford, but this failed to materialize.

While Dodge were “umming and ahhing” about their deal with Richard Petty, they were likely thinking more about what their new corporate masters Fiat were thinking. At the time, Fiat wasn’t exactly as interested in Dodge’s NASCAR connection as they were in trying to secure a viable and lasting corporate structure that would see Chrysler be restored to good standing as a commercial entity. That attitude from Fiat did change somewhat later on, as it happens, but that’s another story.

After Team Penske had jumped ship, the only thing that would have kept Dodge going in NASCAR would have been signing an alternative big team name. This brings us neatly to the next point.

Once Team Penske were out and racing off in their new Ford cars, and any deal with Richard Petty Motorsports was off the table, Dodge first seemed to be playing it cool, acting as though a deal with another team was right around the corner. The reality, however, was quite different.

They couldn’t just choose any old team for this. They had to choose a high-level team with R&D experience and resources — including an engine shop — as well as drivers of experience and skill. In other words, a clone of Team Penske was essentially all that would have passed muster.

What Dodge found was that any team that met all of their criteria were, as one might expect, already solidly tied in with other manufacturers. Why would Ford, Chevrolet or Toyota skip opportunities to work with such great teams, or let them go over to Dodge? With no viable teams willing to run Dodge cars, the revenue would dry up and Dodge would be forced to think the unthinkable.

A manufacturer being in or out of NASCAR depends entirely on the caliber of the teams that they get to drive their cars. Teams get the glory and attract the sponsors, which is where the lion’s share of all the money comes from.

Manufacturers get their cut by supplying the cars to these victorious teams. Without serious teams to race their cars, the financials behind Dodge’s bid to stay within the NASCAR world completely crumbled to dust.

On top of everything else, that new corporate parent was looking over their shoulder at the cost-benefit analysis of Dodge being a part of NASCAR, and the fact is that Fiat were skeptical at best, in the beginning at least.

The deal to create Fiat Chrysler Automobiles (FCA) was worth a great deal, but it was the general commercial side of the brand that Fiat was most interested in. Such projects as NASCAR were just that: passion projects.

Dodges Departure from NASCAR was a cumulation of numerous factors, of which, as we highlighted above, the departure of Team Penske to Ford, the inability to sign an equally competitive team and the dealings within the parent companies all were large contributors to Dodge departing NASCAR.

However the door is always open and perhaps with a new car and rumblings (ha) of a potential move to hybrids at some point it maybe we will see a Dodge at Daytona in the coming years?