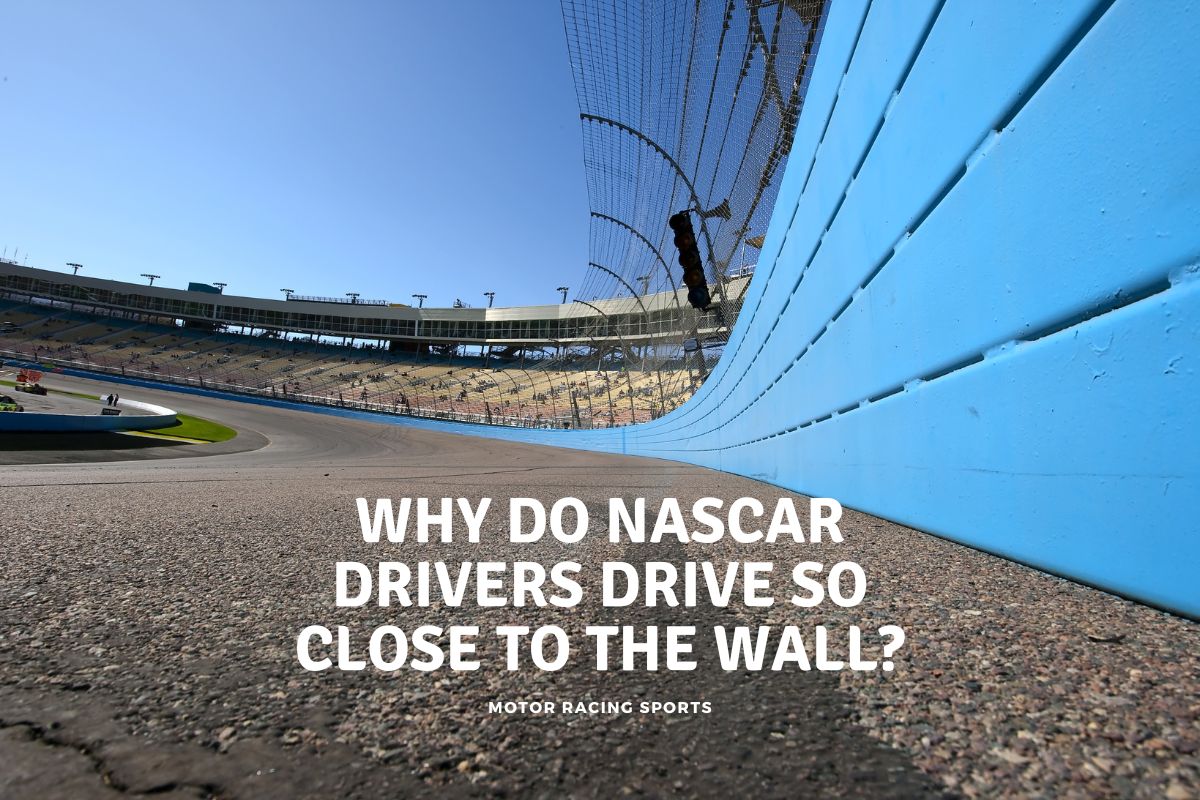 If you’ve ever watched international track stars running a race, you’ll know that one’s position on the track is key to one’s overall racing strategy. When it comes to tracks of an even, regular shape, the general idea seems to be to get to and stick to the inside track as much as possible. In the world of NASCAR, however, it’s not that simple at all.

Although the inside of an oval speedway is the shortest route it is rarely the quickest. Driving closer to the outside wall in NASCAR races allows for faster speeds due to shallower turning and less braking. This often equates to faster lap times and is why NASCAR drivers drive close to the wall of an Oval Racetrack.

In this article, we are going to explore the reasons behind NASCAR drivers’ apparent “hugging” of the outside wall on the track which seems to happen with alarming frequency. If the track is an oval, isn’t the inside part of the track the shortest and therefore the fastest route? The answers to these and other related questions may surprise you.

Why NASCAR Drivers Go So Close to the Wall

Let’s first look at the core content of today’s article, answering why it is that NASCAR drivers hug the wall so often. The simple answer is that riding the track closest to the wall is, in reality, the fastest and most efficient way to complete each circuit. This seems completely counterintuitive, of course, when you remember your basic knowledge that on any round track, the inside lanes offer a shorter route.

The main difference comes in the speeds at which different oval track races are conducted. Long-distance runners on an athletics track naturally gravitate towards the inside lane because at their speeds it’s easy to control themselves as they turn and maneuver through the race. When you’re in a speeding stock car heading up to 200+ miles per hour, however, sticking to the inside of the track would present you with a pretty big problem.

NASCAR Races and “The Groove”

A critical part of any NASCAR race for the driver is being able to keep his or her car in “the groove.” This isn’t a preset path carved into the track like some kind of railway or monorail, but refers to the optimum route around the track that allows drivers to finish each circuit in the shortest possible time.

On an oval track, the groove will take drivers up close to the wall on straighter, wider parts of the course, and then at the last opportune moment they’ll take the turn, drawing them closer to the inside, and then back out toward the wall again on the other side. This brings us to the aforementioned “pretty big problem” when it comes to trying to stick to the shorter inside of the track.

The inside may be shorter, but it prevents you from staying “in the groove” throughout the race because drivers have to moderate their speed much more severely when trying to stick to the inside track. The turn to the left is much harsher, thus needing far stronger and keener braking maneuvers. When keeping your car on the outside of the track close to the wall, you do have to cover more distance overall, but you can do so at far greater speeds.

What’s more, hugging the wall and then maneuvering just at the right moment to take the corner time after time helps build a smooth and race-winning momentum. The tricky part is doing that when there are about 39 other drivers on the race track with you!

What Happens “Outside the Groove”?

Keeping one’s car in the groove is a fine balancing act that draws a lot of mental and physical strength from NASCAR drivers during a race. Falling out of the groove and either being too close to the wall or too close to the inside can create a tremendous lack of balance, making it harder to stay fully in control.

What’s more, those who fall out of the curve during a race run a much greater risk of being involved in accidents, either crashing themselves or causing others to crash. The more drivers can stay in the groove, the safer the drivers will be overall, but also the more effective drivers will be at trying to overtake others without too much risk.

“The groove” is a key term that refers to the optimum route around a NASCAR track, in particular an oval track. There are other terms as well that define areas of the track both good and bad that the drivers may find themselves in at some point.

When teams hear that one of their drivers is “getting into the gray,” they know that they are straying closer to the “apron” of the track, which is an area on the inside of the track below the yellow/blue lines at different speedways. It’s okay for drivers to traverse the “gray” of the apron, but not all the time — hence the idea of “gray” meaning unclear as to whether it’s okay or not. On straight sections of the track, it’s allowed, but not on the main bend.

Driving on the Marbles

Wear and tear on the tires and other components of the NASCAR vehicles usually depends on the condition of the track. Speedways that have recently repaved their track, for example, will see drivers experiencing far less wear and tear and high speeds have less effect on the tires thanks to the smoother, more even surface. Those speedways whose tracks are themselves becoming worn, however, present new hazards.

One such hazard is an area of the track known as “the marbles.” If and when a track causes excessive wear on tires, and when other bits of debris come loose during a race, they tend to gather more in one zone of the track, invariably closer to the outside of the track.

The motion of the cars tends to send things flying outward. Therefore, if a race has been especially rough, drivers might find their “groove” moves somewhat closer to the inside of the track as they’re afraid of getting impacted by these rogue bits of debris.

The fact is that not every “groove” is the same, because not every track is exactly the same. Even when the shape of two tracks is very close, the other conditions might not be.

An older, less recently repaved track will create more debris to generate a “marble” zone, and the different shape of tracks means finding the optimum route is a new adventure on every race.

NASCAR Drivers aim to complete the race in the fastest possible time, not the shortest possible distance and with oval tracks and the speeds they manage to achieve this is often by finding ways to maintain that speed for as long as possible.

One way is to reduce the impact of braking and cornering and this is acheived by staying high on the track, close to the wall, until they have to turn. It also makes the cornering less severe as if there is room, they can then use the whole track from the outside to the inside to keep as much speed in the car as possible.

So unlike slower sports, the shortest route is not always the fastest in NASCAR.