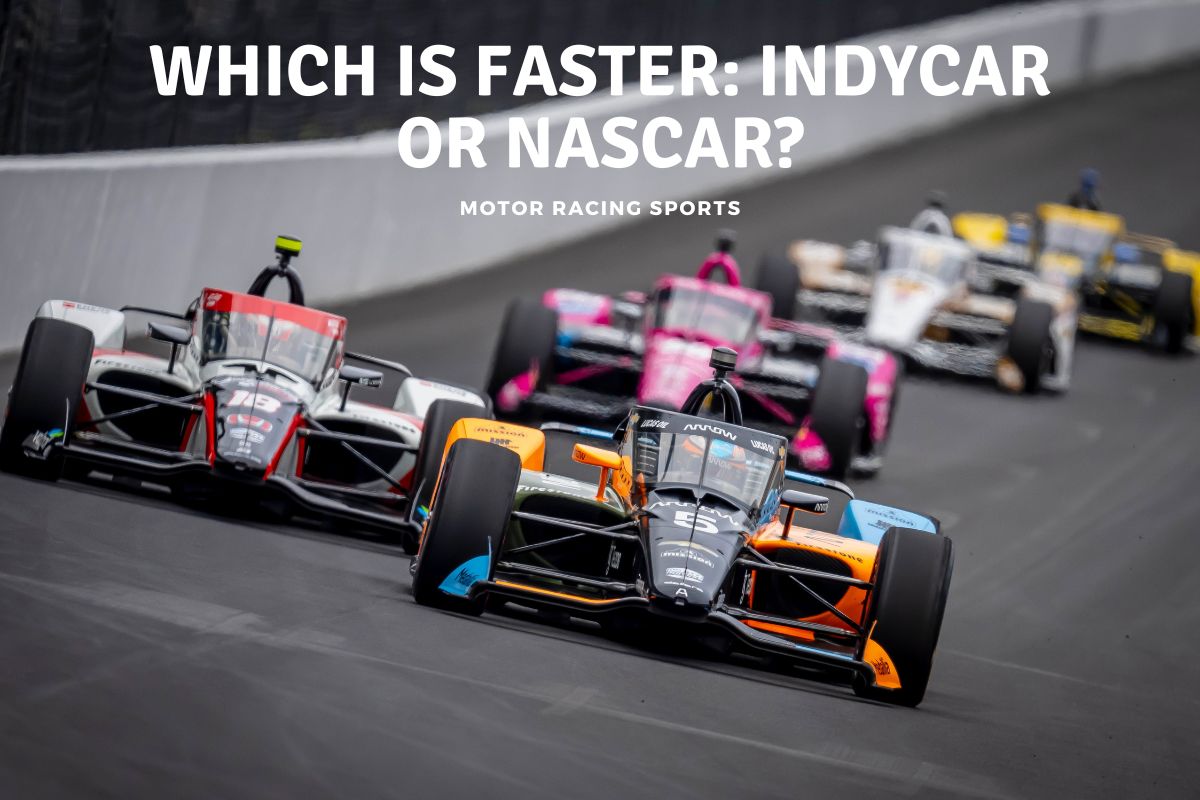 Fans of IndyCar and NASCAR both can agree on one thing — these motorsports are fast! But the question for many remains – which one is faster? When we’re talking about cars and their incredibly bold drivers who hurtle around tracks at 200+ miles per hour, does it really matter which one is technically faster?

IndyCar is faster on average than NASCAR, and even in top speeds during races. IndyCars top speed is recorded as 236 miles and hour, and NASCAR is at 212 miles an hour. However NASCAR has travelled faster on salt plains, and faster on unofficial laps around speedways.

It seems that for some people, it does, which is why we have prepared this article. However, far from just giving some key numbers on top speeds, lap times and records, we’ll also try to share some insight into what makes one faster than the other.

Which is Faster? IndyCar or NASCAR?

Strictly speaking, and focusing entirely on top speeds, IndyCar is the faster of the two sports. There are numerous factors behind this, which we’ll go into in some detail further below. The top 4-lap average speed of an IndyCar is 236.986-mph, set by Eddie Cheever Jr. back in 1996 at the Indianapolis 500. In comparison, NASCAR’s all-time speed record was set by Bill Elliott at the Talladega Superspeedway back in 1987 at 212.809-mph.

As we mentioned in the introduction, what’s an extra 20-something miles per hour when you’re both so far north of 200? These are both break-neck speeds that present considerable danger to the drivers, while also being incredibly exciting for the spectators and fans, of course.

To start with, NASCAR vehicles are about twice the weight of IndyCar vehicles. There are some who have even gone so far as to characterize NASCAR vehicles as “flying bricks” or similar things, given their shape, size and weight. The total weight of a typical IndyCar is usually around 1,400-1,500 pounds, whereas a NASCAR can easily exceed 3,000 pounds.

Even when you take into account the somewhat lagging effect of an IndyCar’s acceleration, the overall top speeds that they can reach are far greater, and the car remains less burdened by sheer bulk, unlike a NASCAR race car, which accelerates as well as it does in spite of its shape and build rather than because of it.

Following on from the previous point, a key part of the lighter construction of an IndyCar can be seen in its exposed open-wheel design. The uninitiated might believe that exposed wheels carry a greater disadvantage for the car and driver given their apparent lack of protection, and while that is valid, there is more to the story than that. Exposed wheels actually play a big part in IndyCar vehicles being so much faster than their NASCAR counterparts.

First of all, the exposed wheels are a big part of the IndyCar being so much lighter than NASCARs. With its lighter weight, the IndyCar can reach and maintain higher speeds, and proves a much more maneuverable vehicle on the track. This is an important factor because the majority of IndyCar races are done on longer road courses, with only a small minority on oval tracks, whereas NASCAR operates in the opposite way.

Secondly, exposed wheels are also a critical design element that allows strong streams of air to cool the brakes. On road tracks where the IndyCars are accelerating and braking so harshly and so often, such cooling is instrumental in helping a car to keep going through an entire race.

After a fateful day at Talladega Superspeedway in the spring of 1987 where Bobby Allison’s car went at more than 200-mph into a catch fence, NASCAR decided that a more major safety measure was required to ensure that these incidents wouldn’t happen again.

This meant the introduction of restrictor plates, which while now confined more to the superspeedway tracks, still make the sport of NASCAR overall slower than that of IndyCar, where no such restrictions exist.

NASCAR and IndyCar engines are quite evenly matched on paper. NASCAR uses a naturally aspirated 5.8L V8 engine that delivers about 670-hp on average, but is often capable of 700+ horsepower. An Indy Car runs on a 2.2L twin-turbocharged V6 engine, which at first glance might seem much inferior to the huge displacement and V8 build of the NASCAR engine. However, the twin turbo helps the IndyCar engine deliver anywhere from 550 to 750 horsepower, thus proving that even a 2.2L engine can match a 5.8L one with the right kinds of turbo gear.

We have an infographic linked below that highlights some of the top speeds and average speeds of IndyCar, Formula 1 and NASCAR, if you use it please credit or link back to us.

What Difference Does it Make?

So, it would seem that in terms of raw speed on the track, it’s IndyCar that’s the fastest of the two, and speed is certainly what motorsports fans seem to crave the most when it comes down to it. However, how much does it really matter in the grander scheme of things? IndyCar is fast, but NASCAR is arguably the tenser and exciting of the two, given the more tolerant attitude when it comes to car-to-car contact.

On the IndyCar track, contact is strictly forbidden, much like it is in Formula 1. The exposed wheels and generally lighter design of the car make such contact potentially lethal. In the brick-like solidity of a NASCAR, however, it creates a strange but well-adopted opportunity to make a bump with another car here and there.

Finally, it seems strange to think of either IndyCar or NASCAR in a competition for speed, when it’s apparent from watching any single race that the drivers in both sports are dealing with death-defying speeds on a regular basis. When speeds get to well over 200-mph, or even 180-mph, then how much ‘faster’ it gets seems something of a moot point.

We have a collection of other articles on NASCAR and other motorsport speeds in the list of articles below. You can check out if you are looking for more information.

So while on race days both on road courses and on speedways IndyCar outpaces NASCAR btu about 10%, in a straight line it seems NASCAR has the edge beating even Formula 1 cars. You can check that out from the linsk about and the infographic we have on the page. However although both racing types are automotive they really are so different that speed becomes little more than a statistic.