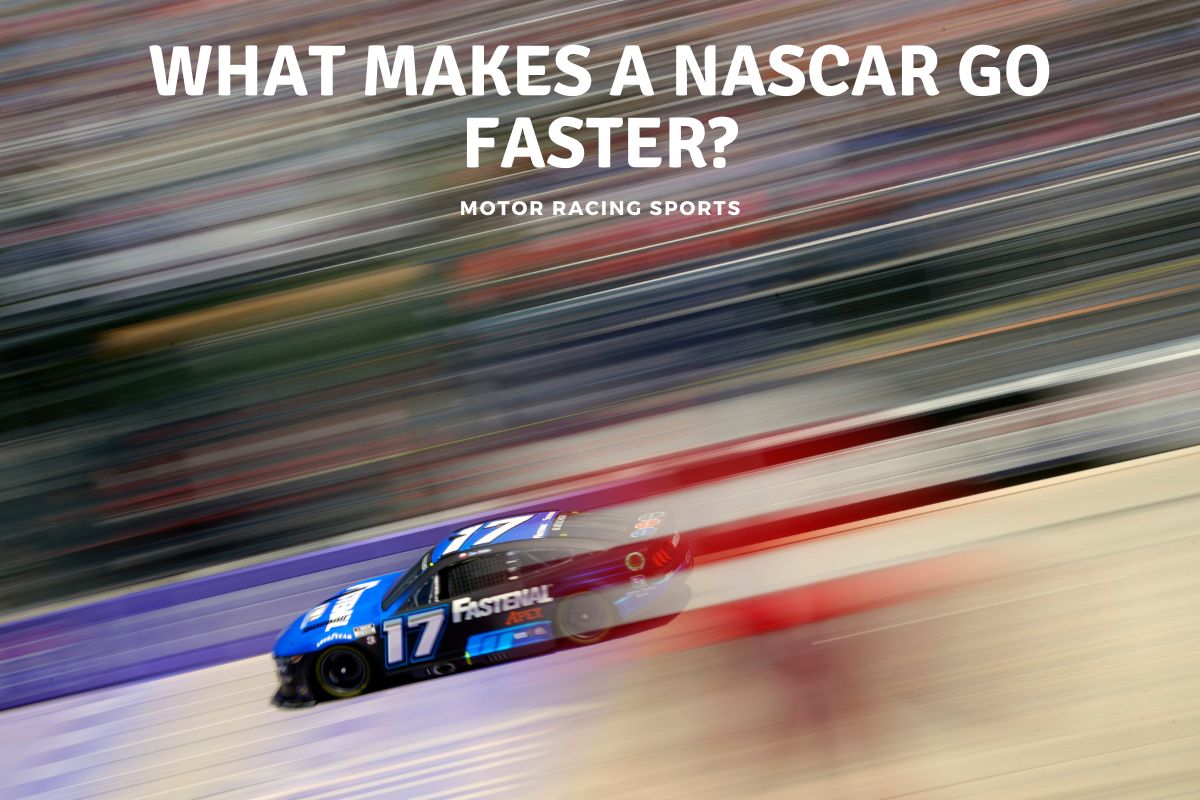 It’s no secret that NASCARs go fast — they will exceed 200-mph on a good day — but what exactly is it about them that makes them go so fast? It’s easy just to point to the engines and their raw horsepower and say that’s why they can go so fast, but is that really all there is to it?

Factors that can increase the speed of a NASCAR Race car include type of fuel, tires used, banking, the type of track used and of course monetary budgets. Within the race tactics like drafting, or the Haul the Wall technique Ross Chastain used at martinsville can all help increase speed.

In this article, we’re looking at all the things that NASCAR teams can look to in making their competing cars go faster.

Remember that the “SC” in NASCAR stands for ‘stock car’ which reminds us that all teams and drivers in any NASCAR race have to conform to certain rules about their car’s build and technical specification. Under such circumstances and conditions, how is it even possible for teams to get their cars to go faster? If all the cars are of the same mechanical capability, then what is left to do?

Firstly, it is certainly true that the potential of each car in terms of its engine power are all the same. When restrictor plates are  in play, engines are limited to 510-hp, and on short, intermediate and road courses, it is increased to 670-hp.

Secondly, other aspects of the car, while being designed and built by teams individually, also share many common points because teams are trying to achieve the same goal on the track, and have to adapt their components to optimize them for each track location and its conditions.

Let’s start with the design of the car’s exterior. To allow cars to travel around the tracks — especially the intermediate and longer tracks — the team’s engineers need to ensure that drag and wind resistance are at levels that will allow drivers to excel. Another key factor is downforce, which allows the cars to travel at high speeds without fear of flying off the track, which basic physics suggests that they should!

With the right combination of aerodynamics and the ability to create sufficient downforce to allow smoother and more seamless turns, teams can create cars that their drivers can confidently accelerate to mind-boggling speeds without fear, or certainly with a great deal less fear.

NASCAR vehicles are stock cars, it’s true, and that means they use radial tires just in the same way that most people’s cars do. However, NASCAR vehicle tires being radial is about the only thing they have in common with ordinary radial tires. For one thing, they have to withstand the incredible speeds and resulting temperatures that comes with being in a NASCAR race, but how do they also aid cars in gaining their much-needed speed?

The first important feature is the use of nitrogen instead of regular air to fill the tires. Nitrogen-filled tires are a bit of a gimmick in the ordinary driving world, but on the racetrack they make a critical difference to the way that the tires expand, create pressure and improve handling. No high-speed handling is possible without the proper traction, and the nitrogen in the tires contributes to that.

Furthermore, the material that is used for the tires is also of critical importance to NASCAR teams. Softer materials are better for generating traction, of course, but the trade-off is that they wear out faster, which isn’t so helpful if you’re in the Coca Cola 600 with hundreds more circuits to complete at break-neck speeds.

Besides choosing the right material, NASCAR also deems that their stock car tires should be treadless, which seems counterintuitive when we’re talking about gaining enough traction to make speeds of up to 200-mph safe. However, it makes sense when you consider that  on a typical dry NASCAR track surface, tire tread merely gets in the way. A treadless design ensures that all of the tire can remain in contact with the track surface.

Each team builds engines for specific events, often resulting in engines being used for just a single race. Every engine unit has to be carefully pieced together and calibrated to deliver all the power and torque required. While your typical high-end and high-specification sedan engine generates about 300+ horsepower, the cars on a NASCAR track are generating up to 750-hp.

These engines are built to be about 3.5 times faster than a typical sedan car, boasting superlative consistency and overall efficiency. It takes the combined skill and expertise of the collective team, using engine blocks supplied by their team OEM — Chevrolet, Toyota, or Ford — and then using the right components to build a unit that can properly deliver the correct speed and control that drivers need to gain victory.

Since 2004, NASCAR had made use of a special fuel created by Sunoco, specifically called Sunoco Green E15. It’s an unleaded fuel blend with a 98 octane rating. Don’t let the name “Green” distract you, however, because it’s not exactly eco-friendly.

In fact, the fuel gets its name from its distinct color. The formulation is designed specifically to deliver high-performance results in the NASCAR Cup Series, XFINITY Series, and the Camping World Truck Series.

The 98 octane rating is further boosted by a 113 octane rating of the 15-percent ethanol content within the fuel mixture. Such high octane ratings mean that Sunoco Green E15 is ideally suited to withstand the phenomenal rates of compression that NASCAR vehicles endure in any given race.

We have more details on NASCAR Fuel in the infographic below.

Money Makes the NASCAR Go Round

In the end, what truly makes a NASCAR go faster is the considerable investment of money that teams make into parts, drivers and, most importantly of all, the expert staff that it takes to get cars ready for each individual race and to deliver the ideal speed to ensure a safe but glorious victory for the team in question.

We have more articles on NASCAR speeds here on the site that you can check out.

Other Factors that increase NASCAR speed

While engineering and money certainly help with optimizing a NASCAR Race cars speed there are tactics within the race than can be used to help the car achieve higher speeds.

Drafting is one of these, we have a longer article on this here on the site (just follow the link) which is the process of tailgating another car at high speed and allowing them to break the air in front of them and pull the car behind along. It actually helps the leading car as well.

Track type: Speeds on certain tracks are much higher than others, and although length plays a part it is also the banking ( again we have an article on this on the site) that helps by keeping the car on the track rather than sliding off. Tracks like Michigan, Daytona and Talladega all have steep banking.

While there is Plenty that is Stock, in the National Association Stock Car Auto racing race cars, there is plenty that teams can do to eek out the last drop of speed from their cars. While there are attempts to level the field with stock elements money, as with most things in motorsports, always helps. It helps with testing, recruiting, and of course building cars and all these together helps the cars go that little bit faster.