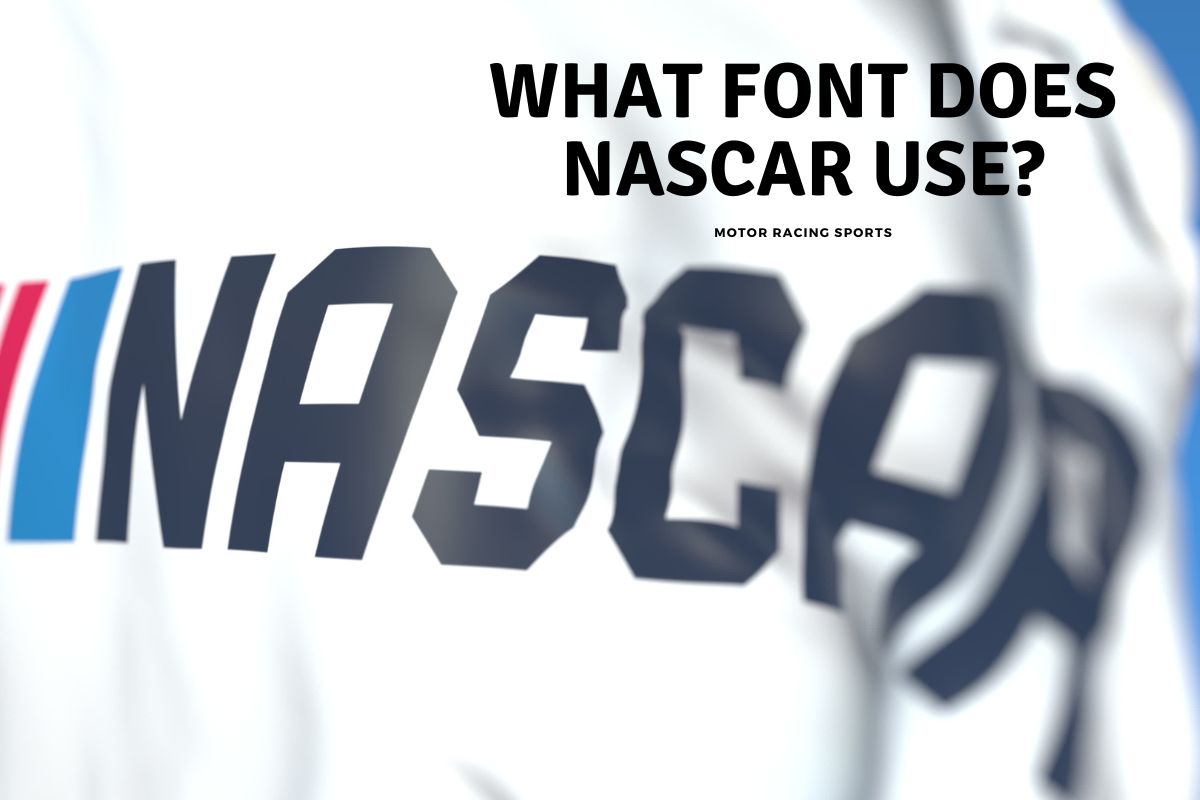 NASCAR is one of the biggest racing leagues in the world, and the NASCAR font is a big part of the appeal and recognition, it seems to have been ever present – but what font does the actually company use? Any company’s font is an important part of any brand or organization, especially one that wants to be taken seriously. NASCAR has used a specific font for some years now, and it’s time to find out what it is.

While NASCAR uses a specific custom made font, the closest available font you can find to their logo is the ITC Machine Medium. The NASCAR font utilizes the modernity and movement of this typeface to create a feeling of movement and growth and always to be recognizable.

as an example this is the ITC Machine Medium Font and the Hauser Bld Italic in the image below they are downloadable from dafont.com which you can find in the link below as well. They are the closest we have found when we researched fonts similar to the NASCAR one.

In this blog post, we’ll look at NASCAR’s font and discuss why it might be a good choice for them. We’ll also talk about some other fonts that could work well for NASCAR and why they might be a better option.

What Is The NASCAR Font?

The sleek font used in the NASCAR logo naturally stands out and portrays a feeling of movement and growth. But this prompts a question, what is the font exactly?

It turns out the font used for the NASCAR logo is a custom font. However, there is one or two typefaces that matchit pretty closely. These are is ITC Machine Medium and Hauser italic (bold, condensed or otherwise) . The letters have the same square sans-serif design but a little more flair. And, of course, the font is italicized within the NASCAR logo.

As we mentioned these are similar to the NASCAR font and available on sites, such as DaFont, for free, but of course, they don’t match up exactly to the real thing.

While the NASCAR font is unique, there are other fonts out there similar to the two above that can give your designs a similar feeling. If you’re looking for a sans-serif font with a modern touch, check out these alternatives:

Why Is This A Good Fit As The NASCAR Font?

ITC Machine Medium is an excellent match for the NASCAR logo, and there are many ways that the font suits the fast-paced world of NASCAR. You may have seen this font in the logo on all NASCAR merchandise, such as shirts and caps. Here are some reasons why we think ITC Machine Medium is the perfect NASCAR font:

It Has A Masculine Look

The NASCAR font has a very masculine look to it, and i know we are not supposed to say things like that anymore, but the fact remains NASCAR is a sport that’s traditionally been male-dominated, although, welcomingly, there are more female drivers coming through the pipeline. The thick strokes and squarish shapes give the font an industrial feel, which is in line with the cars and equipment used in NASCAR.

The NASCAR logo is all about looking forward, and the font reflects that. The NASCAR font is a product of the machine age, with its clean lines and simple shapes. It looks like it could have been designed in the future, which makes it perfect for a forward-thinking organization like NASCAR.

The NASCAR font is fast and furious, just like the sport itself. The italicized letters give the logo a sense of motion, and the sharp angles make it look like it’s speeding forward. This is perfect for an organization that’s all about speed and excitement.

The Font Is Easy To Read From Afar

One of the most important things that must have come up when choosing a NASCAR font is that it’s easy to read from afar. The last thing you want is for people to be squinting to read your logo. The NASCAR font passes this test with flying colors. The thick strokes and simple shapes make it easy to read, even when it’s far away.

You Can Read The Logo Even In Movement

Another important thing for NASCAR is that its logo can be read even when it’s in motion. This is essential for a sport about fast cars and high speeds. The NASCAR font is designed to be easy to read even when it’s moving quickly, making it the perfect choice for the organization.

How Has The NASCAR Font And Logo Changed Over Time?

At the end of the day, the NASCAR font is just one part of the organization’s identity. The NASCAR logo is also an important part of the brand. The logo has undergone some changes

over the years, but the overall look has stayed pretty consistent.

The NASCAR logo is simple and modern, with a sans-serif font and a few colors. The logo is all about forward momentum, just like the sport itself. The NASCAR font has been through a few changes over the years, but the overall look of the logo has stayed pretty consistent.

Here’s a video showing the different NASCAR logos throughout the years:

The most notable change was in 2004 when NASCAR switched from its traditional serif font to a more modern sans-serif font. This change was made to reflect the changing times and to appeal to a younger audience.

The NASCAR logo has also undergone some changes over the years.

The most recent change was made in 2017 when NASCAR updated its logo to reflect its move to a more digital future.

The new logo is sleeker and more modern, with a simpler font and fewer colors. This update reflects NASCAR’s commitment to moving forward and staying relevant in the digital age.

How The NASCAR Font Compares To Other Motor Racing Sports

The NASCAR font is unique, but it’s not the only racing league with its own custom font. In fact, the IndyCar Series also has its own font, which was designed by Japanese typeface designer Toshi Omagari.

If you look at the logo, you will find that the IndyCar font is similar to the NASCAR font in that it’s a sans-serif font with a modern look.

However, the IndyCar font is more rounded and has a softer feel than the NASCAR font.

The Formula One racing series also has its own custom font, which was designed by British typeface designer Neville Brody. The Formula One font is a modern sans-serif font with a very futuristic look.

It takes a different approach to the NASCAR font by being contained and highly recognizable, but with a similar san-serif background.

The font used in the NASCAR logo plays a big role in creating the feeling the racing league is going for, and that is why it is the perfect NASCAR font. It is modern, it is easy to read, even when NASCAR is speeding by, and it has a simple design that makes the logo recognizable.

The NASCAR font is just one part of what makes this racing league so great, but it is an important part of the overall brand identity.