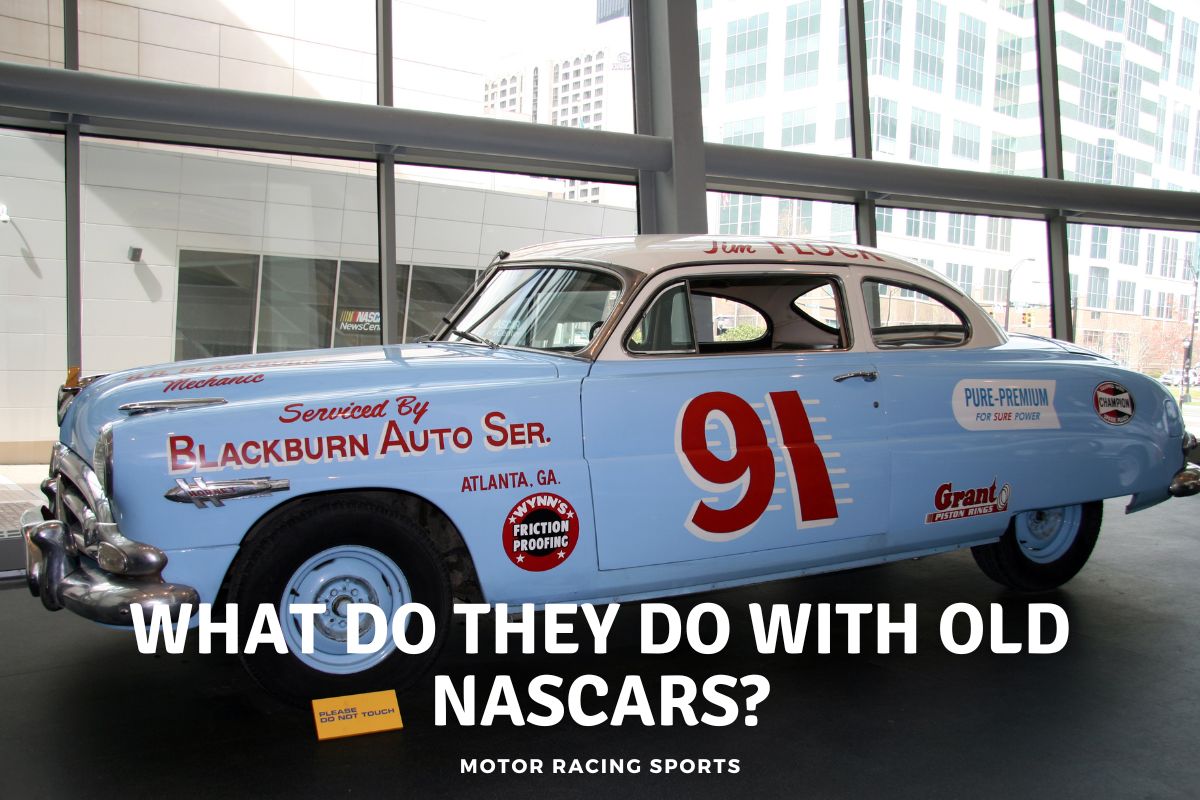 NASCAR is not exactly a sport that people associate with frugality and solid economy. Many of the engines are used only for a single race. Cars get bumped, wrecked and smashed in event after event, and it all just seems a little bit wasteful…on the surface, at least. The reality is quite different, in fact.

NASCAR Race Cars are often sold as collectible items to fans or collectors once their racing life is over. However, if they are scrapped then all working items are stripped to be reused, from tires recycled into rubber for playgrounds, to the steel of the frame to be melted and reused nothing goes to waste.

As it happens, when it comes to dealing with old and wrecked cars, NASCAR is actually a picture of sustainability and efficient practice.

As one Florida news outlet

once put it, “Old race cars apparently never die. They just become new swing sets, golf clubs, and race cars.” In today’s blog, we’ll be taking a closer look at what NASCAR does with its “former” race cars.

To put it simply, what happens to NASCAR vehicles after they are retired for whatever reason or another is essentially one big story of recycling, refinement and reuse.

We aren’t saying that everything gets remade into future NASCAR parts, but it seems that just about every component of a NASCAR vehicle finds a meaningful afterlife when they are no longer needed by that particular team.

Not all cars are stripped for recycling purposes, of course, and we’ll talk more about them further below. When it comes to the stripping down of NASCARs, however, it’s an amazing thing that happens to the many components.

A lot of the raw steel and other metals are sold to major scrap collectors near the race tracks, who process it back into new steel that can be sold on for any use that anyone has for it. Indeed, a portion of that steel might be purchased back by NASCAR makers who then put it into a brand-new car.

Non-metal parts are recycled, too. Tires, for example, can be cut up and have their rubber used to make mats, or for use as dust/powder in playgrounds and sports ground surfaces. Even the oil and grease is recycled, sometimes refined for use by the military.

Most race tracks have drop off points where teams can quickly and easily dispose of oil and grease after each race, where it can be taken for recycling.

You’d be hard pressed to find a NASCAR team that casually disposes of any car, in fact. Teams will only get rid of vehicles as an absolute last resort, and even then such a written-off car will actually be stripped for all it can offer in recycled materials and components.

In other cases, it might even be that two good halves of two different cars are welded together to make a whole working vehicle, such is the desire of NASCAR teams to get as much life as possible from each vehicle.

To Keep, or To Sell?

Some cars never get stripped down for parts, but find their way into the hands of drivers and other collectors who hold onto them for nostalgic reasons, or to build a premium collection of historic cars.

Among the most famous collectors in the NASCAR driver world is none other than Dale Earnhardt Jr., who to date has taken a number of old NASCAR vehicles to his farm in North Carolina — “Dirty Mo’ Acres.”

Earnhardt Jr’s collection mostly consists of old cars, often winning vehicles such as Jeff Gordon’s Daytona-500-winning Chevy from 1997, that are now sitting and gathering moss in the dense woods around his farm. You can check out images of old NASCAR here

It’s really more of a graveyard than a showroom, but it’s not the strangest thing that has happened to any car. Jacksonville.com once reported how drivers had approached local scrap merchants to have their own cars crushed into cubes that they wanted to use as coffee tables or other furniture.

We have an article on NASCAR’s environmental impacts and how they deal with this here on the site. you can check in ou on the link here or on the image below.

It’s not only drivers who either buy or hold onto their own cars, of course. Other interested parties can also get their hands on real NASCAR vehicles through online channels such as eBay.

However, many find more luck on specialist platforms such as Classic.com, where one can buy various NASCAR models from a huge range of model years, going all the way back to 1950 in most cases.

How much are these vehicles? Prices vary, of course, depending on model, age, condition and more factors, but one should on average be prepared to part with around $40,000 to get something close to their ideal model.

Classic.com gives an average of $46,916 for their range of Ford NASCAR vehicles going into auction. They can go for much more — and much less — as well, but it all depends on each individual auction. Most are sold via auction.

Among the top buyers of NASCAR vehicles are those who are hoping to rebuild and tune the vehicles for their own private use, possibly in a local racing capacity. These cars are uniquely built to be tuned and modified more easily than anything street-legal that you’d buy from a typical OEM. For those who have an interest in racing, there’s nothing quite like having a genuine, bona-fide NASCAR in one’s garage!

So while the races might seem more like a destruction derby with new cars than an actual race, there is a long history of recycling deep in NASCAR and one thing that we can safely say, though, is that NASCAR is far from wasteful when it comes to its cars.

There might be questions over emissions and noise, but when it comes to the cars themselves, the sport is a model that others would do well to follow.