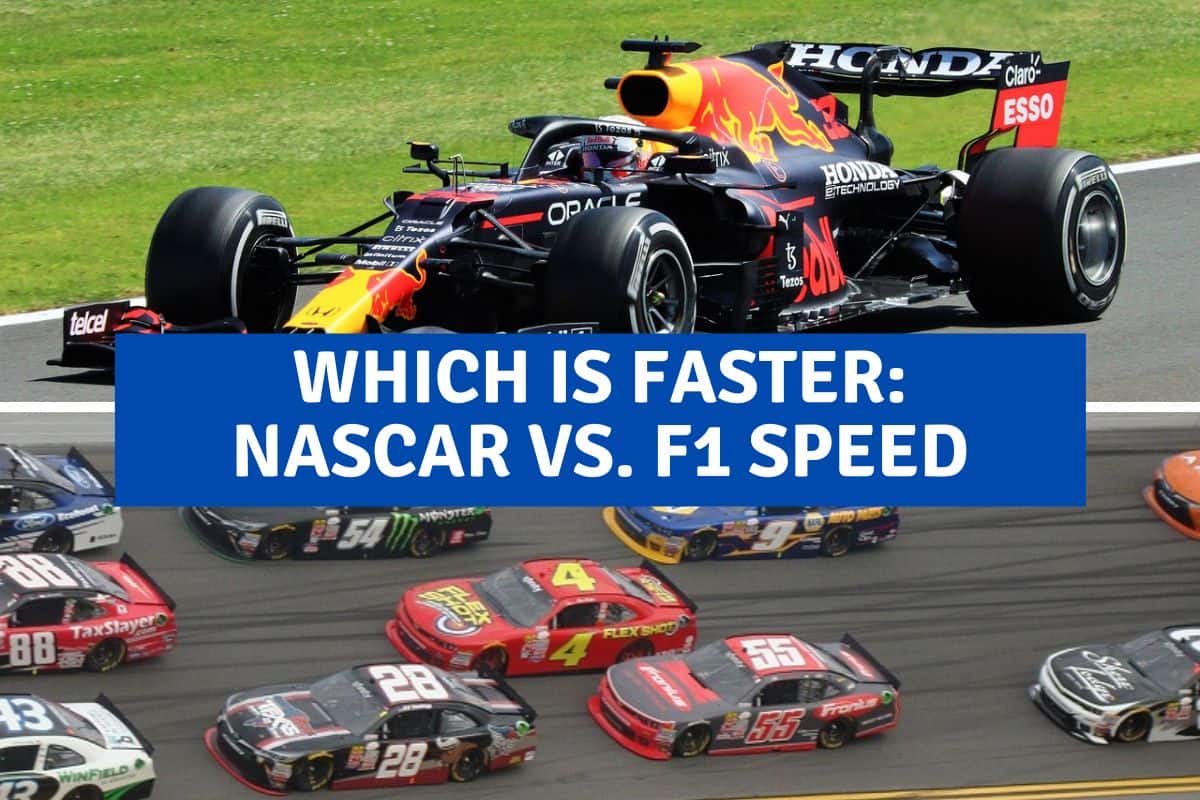 Nascar vs. Formula 1, petrolheads and speedfreaks have been raging about the speeds their preferred racing disciplines can reach for ages. And although new technologies and innovation continuously alter the dynamics of racing car design, regulatory authorities and factors such as track design also profoundly influence the diverse world of motorsport.

A Nascar car can reach 62mph (100 km/h) in a straight line in around 3.5 seconds with a top speed of around 210 mph. Comparatively, an F1 car can do the zero to 62mph sprint in a second quicker and regularly reaches a top speed of 223 mph or 360 km/h, making it a clear winner.

Different racing disciplines produce very distinct cars, each with its own unique strengths and weaknesses, which produce their own results. But in a head-to-head comparison, how do F1 cars and Nascar machines stack up? Read on to find out.

NASCAR and Formula 1 Basics: How are they different?

The key difference between NASCAR and F1 is, of course, the cars themselves. But before looking at these magnificent mechanical beasts, it’s important to consider how the respective rules and regulations differ, which will inevitably affect their individual racing car design philosophy.

Despite the obvious visual differences in the appearance of NASCAR and F1 cars, the rules governing their design are vastly different too.

NASCAR machines are a “stock” standard customized street cars such as Ford, Chevy, or Toyota. Powered by a 5.86-liter V8 gasoline engine, they are quite heavy, reaching over 3200 pounds.

Open-wheeled, open cockpit and principally made of carbon fiber and other ultra-lightweight materials, F1 cars are lighter, coming in at around 1500 pounds and with a smaller 1.6 liter, V6 Turbo powered engine, thereby giving F1 cars a better power-to-weight ratio.

F1 cars are “pure” racing cars, designed and built from the ground up. Thus they are typically also more expensive and with more sophisticated onboard gadgetry than NASCAR cars. F1 are the Jack Russels and NASCAR, the Pitbulls of motorsport.

The circuit rules differ too. As opposed to the twists and turns of F1 circuits, NASCAR tracks are oval, with the gradual left only turns that see cars traveling at full throttle for extended periods. In NASCAR, contact between cars is allowed; in F1, it is potentially far more dangerous and totally banned.

Both racing disciplines make use of pit stops for tire changes. With NASCAR races being longer than F1, around 300 laps, and taking up to 4 hours to complete, refueling is allowed mid-race. In F1, refueling has been banned by the FIA since 2009 for safety reasons, and races take around 2 hours.

For reference we have put some of the major differences between NASCAR, Formula 1 and IndyCar, including top speed, in the table below.

Designed For Speed Or Handling?

Formula 1 cars characterize the benchmark for racing speed. They are strictly limited to 1763 lbs and 1050 hp, tuned for maximum cornering speed and optimal downforce, which could be construed as a hindrance to top performance on the straight yet advantageous around a tight circuit lap.

Unlike F1 cars, which are significantly smaller in size than their NASCAR counterparts and are built to stringent tolerances, NASCAR vehicles can weigh almost twice as much due to their massive engine sizes and heavy body shells and chassis.

Less agile than F1 cars, they are powerful beasts built primarily for maximum speed on an oval circuit with little requirement for agility. Although both cars need to be agile to deal with adverse race conditions, F1 is streets ahead in aerodynamic design and clever suspension, which helps make them agile enough to deal with winding turns and corners.

How Fast Do They Go?

So although determining that an F1 car with its superior top speed is logically destined to beat NASCAR car hands down seems like a foregone conclusion. However, the truth is not quite that simple. It depends on several variables.

Speed is essentially a measure of power versus drag. This produces some interesting results. The force produced by cutting through the air at these speeds is immense. Yet these cars, particularly the F1 ones, are tuned for relatively short lap times, so top speed is not the only important consideration.

An F1 car’s wing creates a massive downforce which enables it to accelerate at an incredible pace and keep it glued to the ground when cornering at high speed, making it the ultimate speed machine.

Although acceleration and top speed are one thing, lap time around the circuit is an entirely different ball game. In practically every type of motorsport, racing teams employ various strategies to trade-off between straight-line speed and cornering.

Because F1 and NASCAR races are held on different tracks, finding objectively reliable data useful in comparing these two can be difficult.

With the higher top and average speed coupled with superior handling of F1, it would be quite logical to assume that an F1 car would win this competition around a typical Grand Prix circuit. But what if the roles were really reversed, and these two worthy opponents met on a NASCAR track?

In recent years, there have been numerous examples of F1 cars pitted against each other in a one-on-one sprint or showcasing their abilities on an oval NASCAR track.

Considering the aforementioned unique design characteristics and race rules for these powerful beasts, it stands to reason that an F1 car, despite its own limitations, is the faster car and therefore is likely to come out on top in a short race.

With a top speed of 223 mph or 360 kmh, a well-tuned F1 car is undeniably the fastest car in the motorsport game, with the exception perhaps, of an Indycar racer. Its sharp, aerodynamic shape and lightweight frame can reach its top speed in a fraction of the time that a NASCAR car.

Not to be outdone, NASCAR is equally exciting to watch, with the cars jostling for position and sliding around the track with loads of spills and thrills. Both F1 and NASCAR are awesome spectacles and are guaranteed to make for an exciting day at the track.