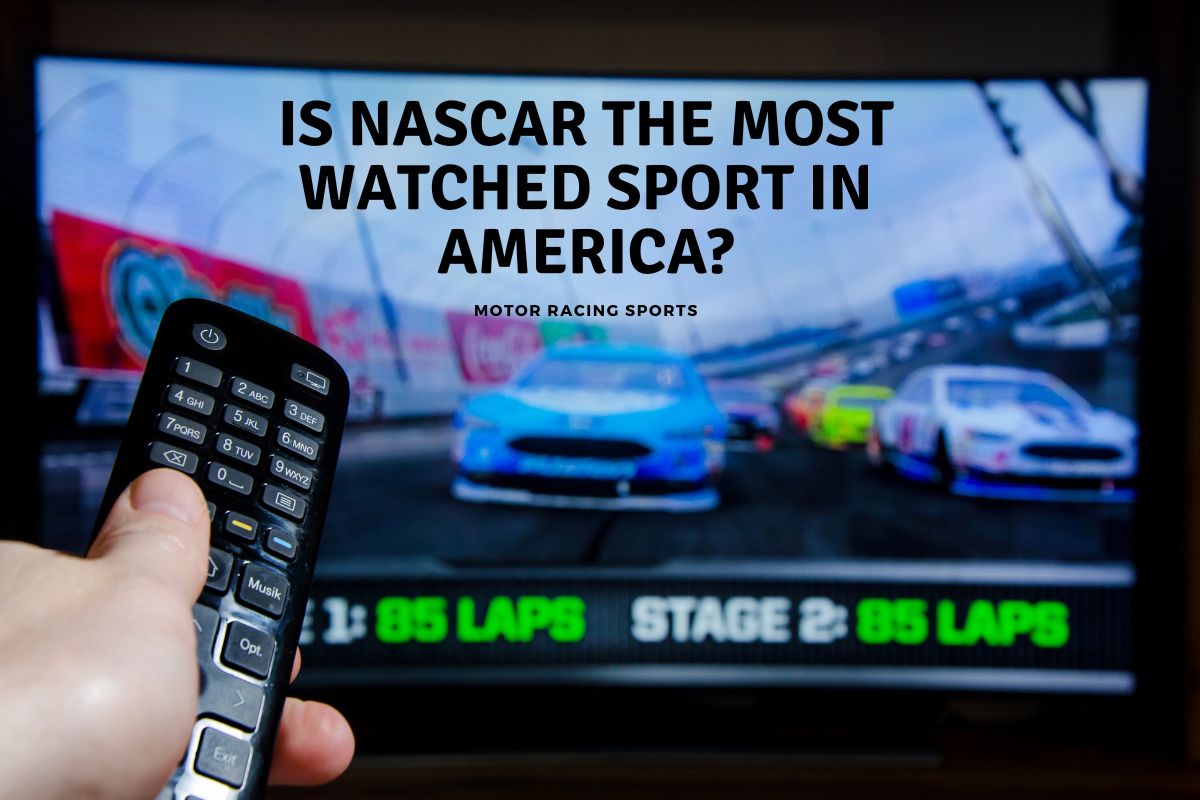 The United States is a nation of sports fans. These are people who love their athletics, and admire the stars of each game. One question that is therefore frequently on the minds of many people in the US and beyond is: which of these sports is the “most watched” sport in America?

For many years, it has been long believed and assumed that NASCAR was the most watched sport in the country, but is this still true? NASCAR certainly does have huge numbers of fans, many of whom come to the tracks on race day, and if not watch it in their homes and in bars all across the nation.

NASCAR is not the most watched sport in America. American Football averages 17 million viewers per game to NASCARs 3.7 Million viewers per race. However after a long period of viewership numbers decline the number of viewers tuning into watch NASCAR races is seeing a growth of approximately 10-15% per year since 2020.

In today’s blog, we want to determine whether or not NASCAR is still the most watched sport in America, and the reasons and other factors that are behind that fact.

Is NASCAR the Most Watched Sport in America?

The short answer to this question is no, but there’s a bit more to it. For many years, and as recently as 2012-2013, NASCAR did indeed enjoy the top spot as the most watched sport, but it has since been supplanted by the NFL, college football, Major League Baseball, the NBA and other events.

The key issue comes with the keyword “watched.” NASCAR does attract huge numbers of fans to the events — assuming an absence of COVID restrictions — such as the all-important Daytona 500, which can host an astonishing 101,500 fans at the location. The largest NFL stadium, the MetLife Stadium in New Jersey, home of the New York Giants and New York Jets, only holds 82,500, by comparison.

While NASCAR might be able to draw larger crowds, the now bigger and more important chunk of viewership comes from outside in the form of television audiences. When you factor in these numbers, then NASCAR falls far short of many of the national league-based team sports.

We have an infographic below which details the estimated viewing and attendance figures for NASCAR and other popular sports for you to use and share, just credit us if you do please 🙂

What are NASCAR’s Viewing Figures? How Do They Compare to Other Sports?

Overall, NASCAR’s viewership as an individual motorsport has been in decline. The motorsports category overall in 2022 enjoys a viewership numbering just north of 9 million, but that pales in comparison to the 114+ million people who regularly watch the National Football League (NFL) or the nearly 69 million who watch Major League Baseball. NASCAR does make up the biggest portion of the motorsports 9 million with 3.7 million viewers of its own.

So neither NASCAR or its larger motorsports family enjoy the top spot, but it does all depend on how you look at it. When you factor in just the on-site spectators, the many NASCAR races do indeed outstrip those of any football game. The wider viewership, however, many would argue is more important because that’s the main attraction for advertisers and sponsors.

You can check out the table below for the overall sport viewership comparison.

As is demonstrated from the table above, and it has to be taken with a huge pince of salt, NASCAR is third in the table of overall viewers. However the other sports in this table the average is per televised game, and there are likely to be more than one ( unlike NASCAR) game or event during the week. This gives them more chance to acquire overall viewers although will not change the average.

What the table does show is that NASCAR, for its one ( or possibly two) televised races a week is still very popular with from 2 to 9 million people watching on Television depending on the race. ( obviously races like Daytona, Talladega and Bristol bring in more viewers.

Why Have NASCAR’s Viewership Been Dropping?

In this section, we’ll consider some of the main reasons that the number of NASCAR viewers has been in decline in recent years and show you a table that may suggest it is actually starting to rebound a little. (some light at the end of the the tunnel perhaps!)

So as can be seen from the table above NASCAR has been declining, and if we look further back to the early 2000’s it is quite a drop in viewership, however in the last few years it appears to be levelling off and in the last couple of years there has been steady growth.

So while NASCAR viewer numbers are still a long way of the peaks of 20 or so years ago, there may be some hope that the trend is being reversed. Whether this is as a result of the new formats and new races NASCAR is introducing is still up for debate.

However, the viewership drop was real so let’s take a look at some of the reasons that happened below.

Among the primary reasons for the decline in viewership can be found in the demographics. Most of the die-hard NASCAR fans have followed the sport since its perceived peak years of the 1980s and early 1990s, when the sport was somewhat wilder and less predictable. These fans have stuck with the sport, but newer, younger fans are not being onboarded in as great a number.

Therefore, the overall result is a decline in viewership as older NASCAR fans literally die off.  The following additional reasons will also help to explain why it is that younger people are less drawn to NASCAR as a spectator sport.

A typical NASCAR race should last somewhere in the region of 3 hours, but many end up being longer when you factor in other issues, breaks, crashes, and other things that can occur and slow up overall progress. Not all people are so interested in watching cars go around circuits for this period of time, especially in its older form where the race was done in a single sitting rather than in stages (see next section on ratings for more on this point).

While it’s true that some NFL games also go on for many hours, the continuous back and forth and greater lack of predictability make it more exciting to watch even when it goes on for a long time. The changing score dynamics, team changes, different plays and strategies also contribute to a more interesting game overall, whereas the same often can’t be said of NASCAR races when it comes to younger viewers.

A Lack of Excitement and Energy

Following on from the previous point, there’s a perception of NASCAR that it’s essentially “a lot of cars on a track turning left.” For some, it doesn’t offer enough excitement. Where are the difficult corners and the chicanes? The jumps? The rings of fire? While this as a perception might not be an accurate one, it reflects how many of the uninitiated feel about NASCAR.

Burgeoning Interest in Other Sports

On top of everything else, younger fans are using their Internet access to circumvent the limited sports and athletic options available to watch on mainstream television and related media. They can now follow overseas soccer, track and field, and other sports with more gusto than ever. With more competition in the field, that means fewer viewers to go around for NASCAR. It stands to reason that the more available sports there are to watch, the fewer viewers each individual one can get.

What Has NASCAR Done to Try and Boost Ratings?

The leaders of NASCAR haven’t sat idly by to watch their sport fall in standing through the years. While not everything they have done has been equally effective, they have nonetheless made great efforts to revamp and update the sport to make it more appealing to new fans.

Racing in stages is one of the key steps taken to make things more interesting. By dividing the race into stages, there is no obvious one winner that can be judged from an earlier stage of the race. There are winners in the early stages, and then a final overall winner.

The advantage here is that it allows the race to be reset and therefore gives a chance for the track dynamics to be changed as well, with new leaders, a new pack, a new contest.Increasing the number of road races in the Cup Series also helps to spice things up for new viewers.

Those who have watched the tricky circuits of Formula 1 may wonder why NASCAR drivers are allowed to still “have it so easy” on an oval track. Of course, racing even on an oval is a lot harder than it looks, but small incremental increases in the number of road races in NASCAR is helping add more variety to the track list and as of the 2023 season there will be street circuit races as well. Although there is still debate on how good or bad an idea that is amongst fans and drivers.

We have two articles listed below that cover the plus and minuses of racing on a street circuit.

While Sports like Football, Basketball, and Ice Hockey are watched by considerably more viewers on Average and in total than NASCAR racing there are still plenty of viewers tuning into watch the race each week.

This number after a long period of decline is starting to level and ven show signs of growth. NASCAR is acutely aware of this decline in numbers and has been pro, and some say retro, actively looking at ways to stem the decline and to introduce new more modern and relevant to today aspects to our 70 year old sport.