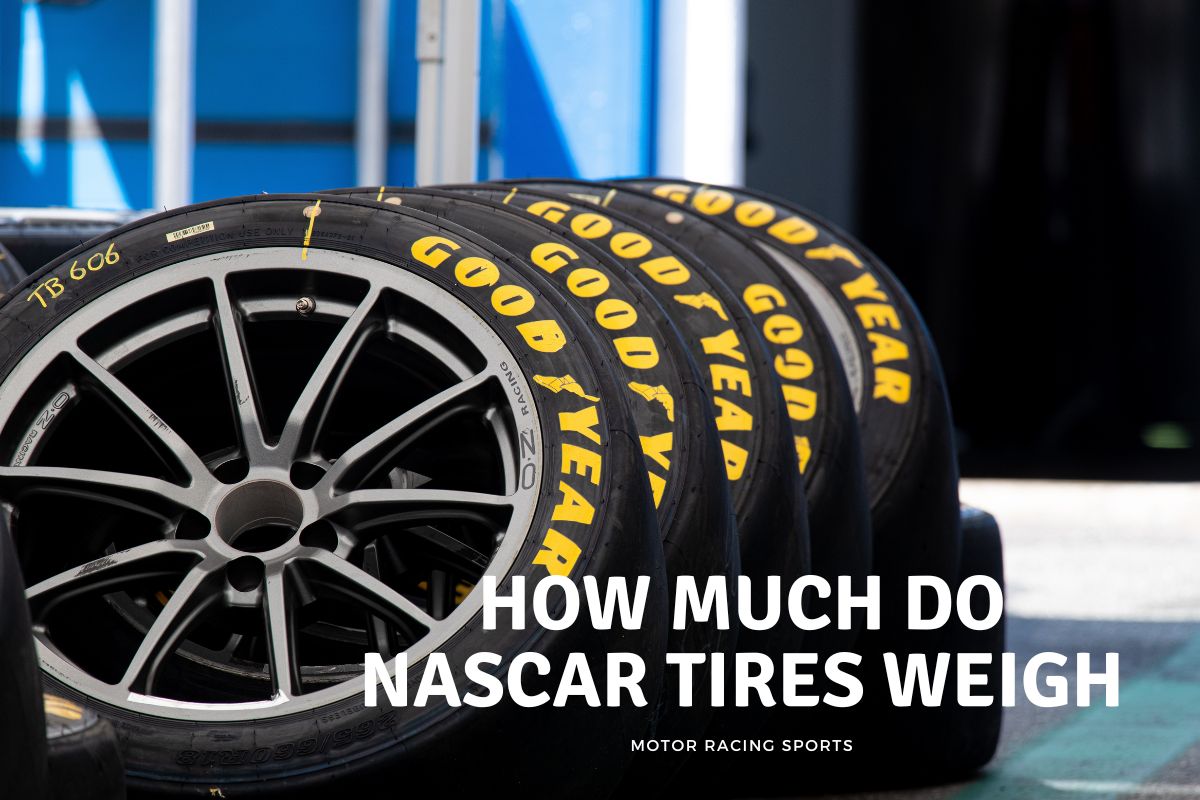 In 2022 everything about the NASCAR Cup Series cars changed, including the wheels and tires. The cars went from the standard steel 15″ rim to an aluminum 18″ rim. The thought behind the change was that most newer cars have larger rims and tires on them, so to make the cars on the track closer to the cars on the road (which is a requirement that NASCAR has in place). But the question is, how much does a NASCAR tire weigh?

The 18″ NASCAR Goodyear Eagle tire weighs around 26 pounds, and the aluminum BBC racing rim used on all the cars weighs approximately 22 pounds. When the numbers are added up, the total combined weight of the tire and rim on a NASCAR Cup Series car is 48 pounds.

Until this year, the tires and rims used were much different. The 15-inch rims were made of steel, so they were much more durable and heavier than they needed to be. They weighed about 27 pounds, and the tire was 25 pounds. This made a combined weight of 52 pounds, which was heavier than the current rims and tires that are larger. Let’s look at the old and the new types and figure out why NASCAR decided to make this change.

The Weight of The NASCAR Tire

You may not think the tire’s weight will make a difference to the car, and in a way, you would be right. All the NASCAR Cup cars have the exact tire and rims because the rules are set to keep the cars on an even playing field. This ensures that none of the cars have an advantage over the competitors, making it a race of strategy and driver skill.

This year, 2022, brought about a new tire and rim set up to make them closer to the street cars they mimic, which is another rule NASCAR has set into place. They are much bigger in size but weigh less than the tires and rims they replaced.

Before the end of 2021, the tires and rims were the average sizes of the tires used on the roads. They were old-school when you consider how long they have been obsolete from the cars and trucks of today.

The difference between the two is small, but when you are talking about the car’s weight, it makes a difference in how the car handles on the road. The bigger the tire, the less rubber they burn when spinning out and mashing on the brakes to go around a corner.

Why Did NASCAR Change Tire Size?

Everything changed in 2022 when the next generation car became the go-to stock car for the NASCAR Cup Series cars. The 15″ tires were swapped out for 18″, but since a steel rim of that size would weigh too much for the pit crews to handle, the rims became forged aluminum BBC ones that weighed less but could still handle the rigors of the racetracks.

But the real reason that NASCAR implemented changes was to make the car look closer to the Chevrolet Camaro, Toyota Camry, and the Ford Mustang that you would be driving on the road. The whole point of a stock car is to be like their siblings that drive through the city streets every day.

Of course, this is not entirely possible because of the stock cars’ safety protocols, but the closer they get to the street car, the better off they are. Car owners are happy because they fall within the guidelines set by NASCAR officials, and the fans are delighted because they resemble the cars they have in the driveway.

That is not the only reason that they changed sizes, though. They also wanted to have their designs closer to the other racing cars, such as the Indy cars, because it made things easier for the company. The tires and rims match their sizes, as does the switch to one large center lug nut to hold the tire in place. This speeds up the times in the pit and makes it much easier to change them out when needed. That is, of course, if they get them locked into place.

How Much Air Pressure Do the NASCAR Tires Have?

The tires are not the same as those you can find for sale in your local tire shop. They are designed specifically for racing, adding extra grip and stability that NASCAR cars require to stay on the track at such high speeds.

Goodyear has decided to step up and let the drivers and their teams know that the tires recommended air pressure is not really a suggestion. They spend time and money putting the tires through rigorous tests to find the perfect balance when on the race track.

For safety and performance, the teams should follow their guidelines. As of yet, NASCAR has not many changes to their rules for the air pressure limits on the left side tires. The teams think the rules should be left as they are because it makes the field more competitive.

Lower air pressure definitely helps with grip, giving the driver an advantage, but it also creates a tire that overheats and blows out. It is a shake of the dice for each team to see how they want to run.

We have many more facts and information articles on NASCAR (and other) tires on the site. you can check out a few below.

The amount that a NASCAR tire weigh can vary by a few psi depending upon how low the teams decide to go down on the left tires. 48 pounds is the total weight of the tires when aired up to the recommended or required amounts. A few psi can make a huge difference, which is why some think all tires should be at one set amount.

Other teams feel it should be up to them about how they want to run because every driver goes through the corners differently. The tires need to be adjusted to the driving habits of the person behind the wheel, just like the suspension and other settings are.

Either way, the ease that these pit crews seem to throw these 40 lb plus tires around is something that needs to be respected!