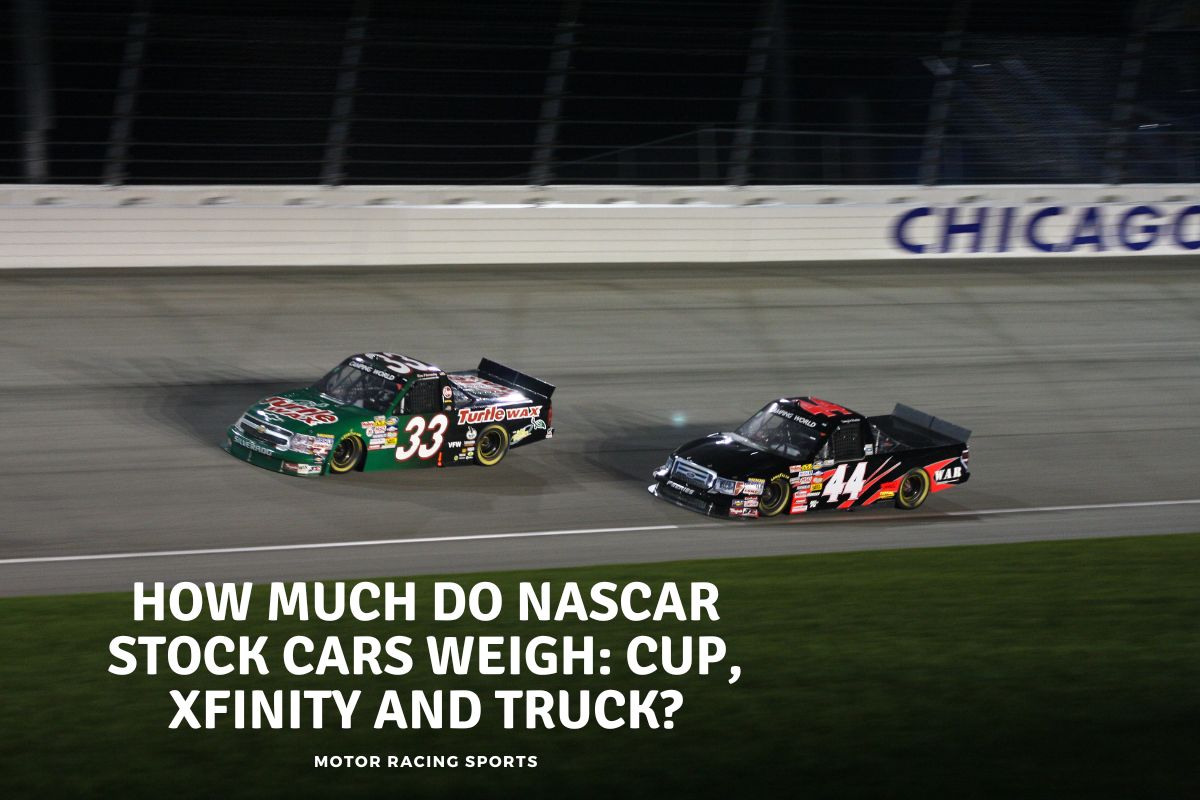 NASCAR is an exciting form of stock car racing popular in the United States. There are almost 40 cars racing around the course, and the winner is decided by only seconds. Of course, weight is an important factor when needing speed. Although there are similarities between the 3 Nationwide series (Cup, Xfinity and Truck), in racing and even car design there are differences in weight between them. We take a look at those differences below.

Be prepared to be amazed when you see forty cutting-edge racecars deftly negotiating the track. Race vehicles may have a look that is comparable to those that we see on the road, but in reality, they are quite a little heavier than they appear because of the stringent technological standards.

Let’s talk about how the different vehicles in the NASCAR series all have different weight distributions, and how it affects their total performance.

There are three primary series in Nascar, and each one of them has its unique regulations regarding the cars that compete in it. We take a look at the 3 nationwide series that are most familiar to people below. the Cup, Xfinity and Truck series.

The NASCAR Cup Series is considered to be the most prestigious racing competition held by NASCAR. Different manufacturers are responsible for the design of the automobiles, yet all of them are required to comply to the same criteria regarding size and weight.

In order to comply with the standards set forth by the sanctioning organisation, a NASCAR racecar must have a minimum weight of 3,300 pounds. The driver and the weight of the gasoline are not taken into account in this computation. The severe regulations that NASCAR has in place for drivers’ weight must be adhered to.

The rulebook stipulates that in order to compete, drivers must have a minimum body weight of 180 pounds. If the driver’s car weighs less than the statutory minimum, the driver must add additional weight to the vehicle.

Fuel capacity is another factor in determining the overall mass of a NASCAR Cup racecar. Fuel is not included in the 3300 lb minimum weight, however, doing so significantly increases the weight of the vehicle. Cup race cars can hold around 22 gallons of fuel, which is equivalent to about 132 pounds.

Taking into account both the weight of the driver and the gasoline they are carrying, the vehicle weighs close to 3,600 pounds.

The NASCAR Xfinity Series is the secondary series on the NASCAR racing circuit. It serves as a stepping stone for drivers who have their sights set on competing in the NASCAR Cup Series.

Cup cars and Xfinity cars diverge in a few significant ways that are important to note. Cup series automobiles often weigh more than 200 kg more than their Xfinity series counterparts, on average.

The minimum weight requirement for an Xfinity Series race car is 3,200 pounds, and that’s without the driver or fuel.

It is required that the vehicle weighs more than 3,400 pounds when the weight of the driver and the fuel are taken into account.

The Camping World Truck Series is the third and final level of competition in the NASCAR full Nationwide series.

In comparison to the cars that compete in the Xfinity and Cup series, these trucks feature a distinct body style in addition to greater overall weight.

The average weight of a truck competing in the Cup series is around 3,400 pounds, and this does not include the weight of the fuel or the driver; hence,

We have a few analytic articles on the importance of weight in NASCAR on the site and you can search or check out the list below.

Why is weight so important in NASCAR racing?

When determining a vehicle’s maximum possible speed, the vehicle’s weight is a key factor to consider.

Vehicles that have a mass that is larger than average take more time to reach their highest speed than those that have a lower mass overall. However, the manner in which that weight is distributed can also have an effect on how well the vehicle performs on the track.

NASCAR racecars are designed with careful consideration given to their weight distribution in order to achieve the highest possible level of performance.

It’s possible that different weight distributions will be used for the various tracks in order to optimize the handling, particularly in the turns.

On oval courses, drivers are required to make only left turns. The NASCAR teams are permitted to move more of the vehicle’s mass to the left side of the vehicle while the race is being held on an oval circuit.

However, given the number of turns that can be taken in either direction, there is a possibility that there is a minor angle.

The proportion of a car’s total mass that is distributed between the front and the back of the vehicle can have an impact on how well it performs. It’s likely that the front end of vehicles are made to be heavier so that the front tyres can handle turns more effectively. On oval courses, this situation arises quite frequently.

On road courses, the centre of gravity of a vehicle should be moved backwards as much as possible. The increased power at accelerating and braking is transferred to the drivers of the vehicles.

In order to be eligible for competition in the NASCAR Cup series, racecars must meet a minimum required weight limit of 3,300 pounds.

The weight of the race car has an effect on both the acceleration and the handling of the vehicle and you can see that in the relative lap times in the different series races.