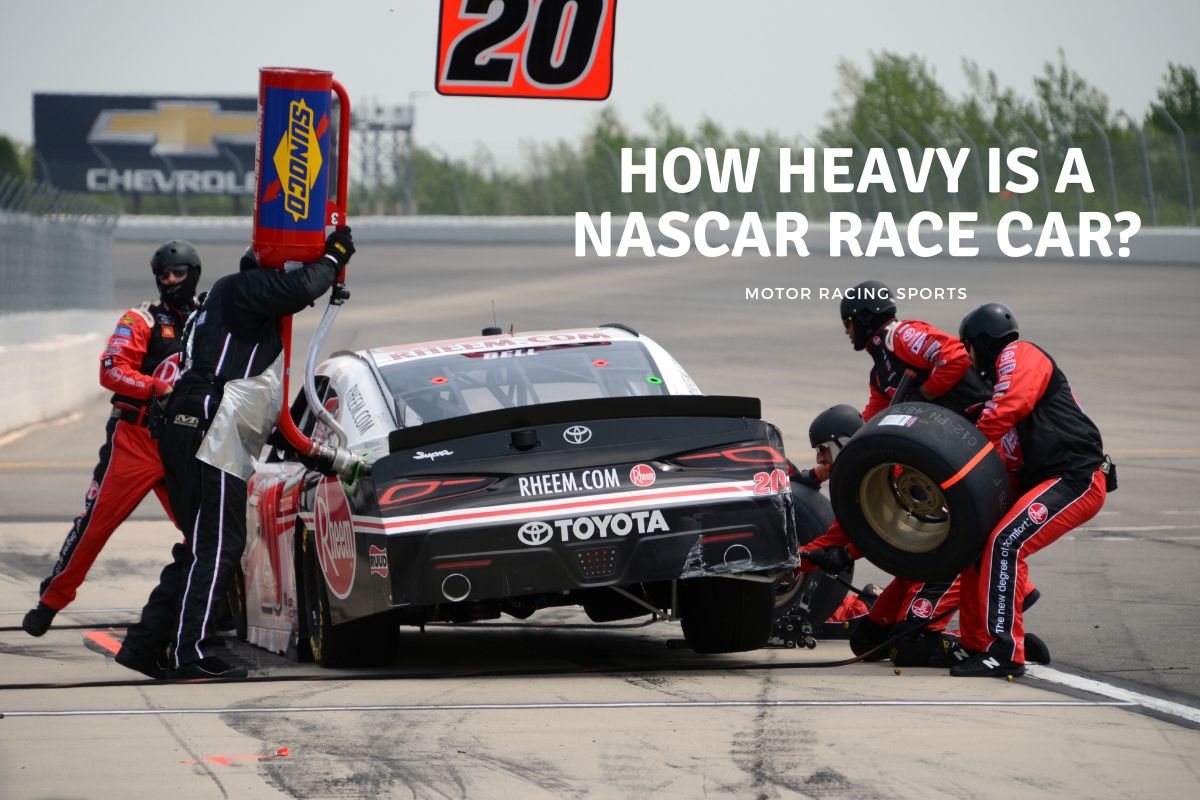 Watching 40 state-of-the-art racecars skillfully make their way across the track is a thrilling experience. Although the cars in the race look quite similar to the cars we see on the road, the specifications mean that the cars are actually a lot heavier than they look. So let’s see, just how heavy is a NASCAR Racecar?

According to the NASCAR regulations the NASCAR Cup Series racecar must weigh 3300 lbs at the minimum without the fuel or the driver. Adding the weight of the driver and fuel can bring the car’s weight to over 3500 lb.

Read on as we break down the weight of the different NASCAR series cars and even talk about how weight distribution affects the performance of the racecar.

How Much Do NASCAR Racecars Weigh?

Nascar has three different main series that all have different regulations for cars. We’ll discuss each in detail.

The NASCAR Cup Series is the top racing series for NASCAR (National Association for Stock Car Auto Racing). Although different manufacturers design the cars, they all have to follow specifications for the design and weight of the car.

However, this rule is only imposed until 140 lbs, after which a driver need not add more weight. Danica Patrick, a female driver who weighed only 110 pounds, did not have to add 70 lbs to her car and instead added only 40 lbs. This gave her a 40 lb advantage over other competitors.

Fuel also contributes to the weight of the NASCAR Cup racecar. Although the 3300 lb minimum weight does not include fuel, adding the fuel drastically increases the weight of the car. Cup racecars have a fuel capacity of around 22 gallons meaning that there are 132 pounds of fuel in the car.

We have broken down the different aspects of the final NASCAR car that contribute to its weight.

The NASCAR Xfinity Series is the second level of the NASCAR racing series2 and is considered a proving ground for the drivers who want to compete in the Cup Series.

The minimum weight for the Xfinity series car is 3200 lbs (1450 kg), excluding the weight of the driver and the fuel. According to regulations, the car has to weigh over 3400 lbs (1540 kg) when the weight of the fuel and driver is included.

The Camping World Truck Series is the third tier of the NASCAR series and involves racing pickup trucks across the tracks.

The trucks tend to weigh 100 lbs more than the cars in the Cup series and have a weight of around 3400 lbs (1540 kg) without the weight of the fuel and the driver.

Importance of Weight Distribution in Racing

Weight is an important factor when it comes to the speed of the car. The heavier the car, the longer it will take to accelerate to top speed (and the more fuel it will use!). However, the distribution of that weight can also influence the car’s performance on the track.

Oval tracks only consist of left turns. If the NASCAR race is on an oval track, teams may distribute the weight more on the left side (up to a 58% bias) so that the driver can maintain high speed in the corners. For tracks that have both left and right turns, the weight distribution will be closer to 50/50. However, there may be a small bias considering the number of turns in each direction.

Weight distribution towards the front or back can also affect the car’s performance. Cars may have more weight in the front for better grip on the front tires. This is especially common for oval tracks. On road tracks, cars prefer having a weight bias towards the rear of the car. This allows the drivers to have better acceleration and more braking power.

Comparison of NASCAR and Formula 1 Cars

NASCAR and Formula1 are the top auto-racing events around the world. Both events feature dynamic, thrilling racing that keeps you on the edge of your seat.

Although the concept for both events is similar, the cars featured in the races are different in almost every way, from their designs to their engines and even their tires.

The Formula 1 cars are smaller than the NASCAR ones and are designed for aerodynamics and maximum downforce. In comparison, the NASCAR cars are bulkier and square, suited to the rules of NASCAR racing.

Moreover, a NASCAR Cup racecar weighs 3300 lbs. This is double the weight of a Formula 1 car that weighs approximately 1500 lbs.

Inside the Hood of the Cars

Apart from the way they look, a major difference between the two cars is the type of engine they use. A NASCAR Cup racecar uses 5.87L V-8 engines. These engines produce around 850 horsepower.

On the other hand, a Formula 1 racecar uses a 1.6L V6 hybrid turbocharged engine that produces around 875-1000 horsepower.

The Formula 1 car is designed to be lightweight and aerodynamic to help it cut through the air and achieve high speeds, going as fast as 230 mph.

In comparison, the NASCAR cars are heavier and slightly bulky while still going as fast as 200 mph.

With only a 30 mph difference in their top speeds, both Formula 1 and NASCAR are high-speed and exhilarating events that car enthusiasts from around the world enjoy.

Q: What Is the Top Speed of a NASCAR Car?

NASCAR racecars have top speeds of up to 200 mph. These racecars feature V-8 engines and take 3.4 seconds to go from 0 to 60 mph. The weight of the vehicles means that NASCAR cars are slower than Formula 1 cars.

Q: Are All NASCAR Car Engines the Same?

All NASCAR car engines are not the same. The engines are similar and need the same specifications and standards; however, each manufacturer can design and modify them differently. The three manufacturers, Chevrolet, Toyota, and Ford, all design their own engine models.

Q: Who Is the Highest Paid NASCAR Driver?

Kyle Busch is the highest-paying NASCAR driver as of 2021. He earned $17.8 million, including endorsements as well as prize money. His net worth is approximated at around $80 million. Busch drives in all 3 NASCAR series and has 200 overall career victories.

The minimum weight of the NASCAR Cup racecar is 3300 lbs without the driver’s and fuel’s weight. The minimum weight for the Xfinity series is 100 pounds less at 3200 pounds, whereas the Truck series is generally 100 to 200 pounds heavier than the Cup racecar. The weight of the racecar affects car acceleration as well as its handling. So, keep your car light and distribute weight smartly if you want those extra miles!