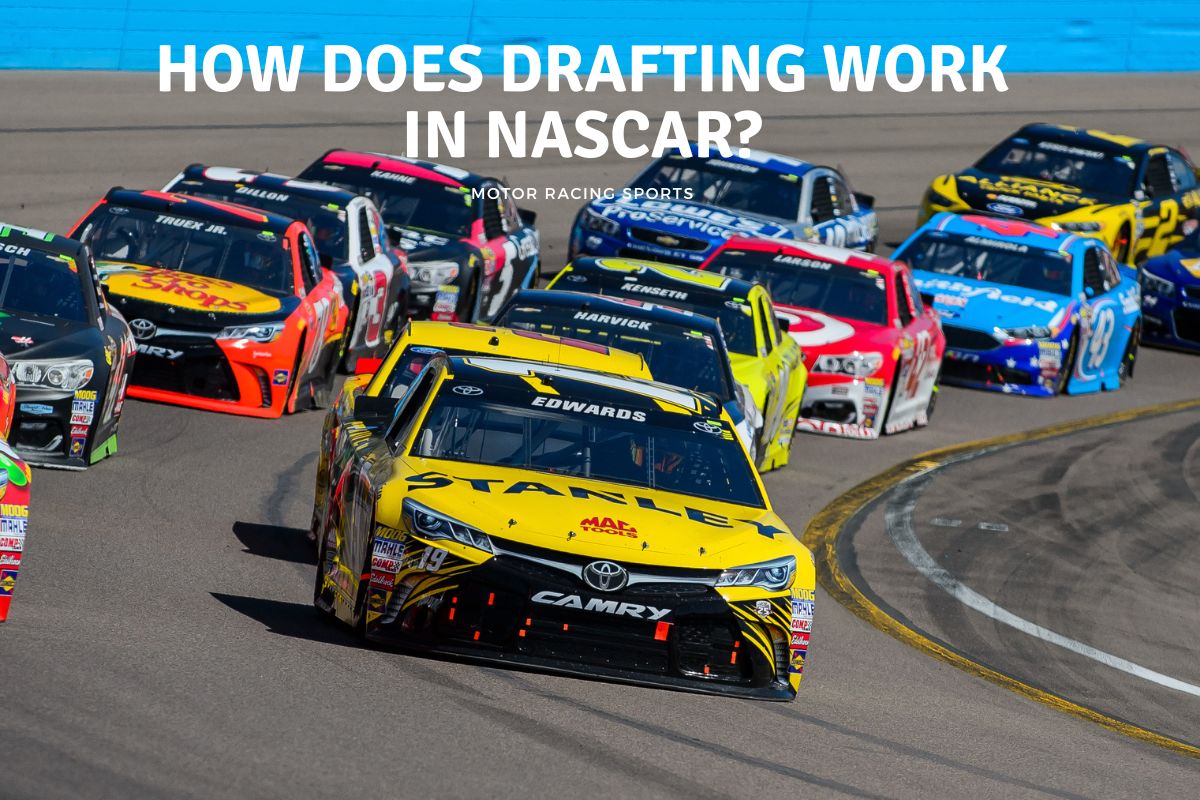 Drafting is one of the most important aspects of racing on superspeedways, and it can be beneficial for other tracks. It can also be disastrous, so it is a trade-off for the drivers, but if you want to win, you must learn how to do it properly. It is a trial and error task at first, and takes years to master. We take a look at how drafting works in NASCAR in this article.

Drafting uses the air molecules around the car that is created by the force of the forward motion. It is based on how much drag you have against your car. When the stock car behind gets within inches of the bumper of the race car in front, they both gain speed because the drag of the air is reduced for both of them.

You can imagine how dangerous drafting is, which is shown every time a bump draft goes wrong. That’s when you will see the enormous pile-ups that can end the day for the racers involved. Thankfully, cars have been set up to reduce the injury rates of drivers, which is why all drivers need to learn about the science of drafting.

The Complete Science of Drafting

When it comes to drafting, there is definitely a science to it. You cannot just go out onto the track, push the gas pedal to the floor, and fly around the track to victory. NASCAR is just as much about strategy as it is about speed and driver skill. A system that includes pit stops, fuel consumption, and drafting.

What Is Drag, And Why Does It Matter?

To truly understand the science of drafting, you need to know what drag is and how it affects every car on the track. The best way to comprehend drag would be to drive on the highway in your car and do a few experiments.

When doing these experiments, you are trying to feel the drag of the wind on your hand. The drag is how much resistance your hand has to the air particles that hit your palm as you switch it in different directions. With the palm facing forward, the wind will try to push it backward. With the palm down, you will not be able to feel much force from the air, if any at all. That is how drag works.

What drag does to the Cup Car is to slow it down. The more objects not in perfect alignment with the car, the more resistance the car will have. That is why you do not see side mirrors on the vehicles, because it would cause a negative reduction in speed.

What Is Drafting, And Why Does it Matter?

Now that you understand the basic concept of drag, you need to understand drafting. It is not something that you can watch on a video screen and become a master at. You must try different things while on the track to get the maximum effects from the procedure.

The videos will help you with the basics, so it is a great place to start, but after that, get out on the track and do the best you can to avoid being the cause of a pile-up of cars. Let’s take a look at the steps you need to take while on the track.

Drafting is a way to gain enough extra force to propel yourself around the car in front of you. You can gain up 5 miles per hour when you work with another driver to draft correctly. This works because it reduces the air particles hitting the front of both cars.

The front car displaces the air up and over their car, and your car behind keeps the air flowing over the top. This gives the car in the back extra power to use to push the car in front.

This is the science of drafting; each time you get on the track, you will have to experiment. You will also have to adjust how you do things according to the driver in front of you. The trick to drafting is to figure out the person in front of you and use their car to push the air away.

In return, you give them a nudge or two to help them gain speed, be careful, though; too much of a bump can cause them to lose control and off into the wall they will go, taking out everyone in their path.

Drafting and drag go hand-in-hand. The less drag you have, the faster you can go. The best way to do this is to draft the car in front of you or beside you. Side drafting can also work, but this is used more for passing than gaining speed.

Just be careful when drafting because you do not want to bump the person in front of you too hard, or you may both be headed for a trip into the outer wall.

link to How Many Hours Long Is A NASCAR Race?

Grindstone Media/Shutterstock Each weekend the three series of NASCAR's Nationwide races kick of on usually the Friday, Saturday and Sunday of the weekend. There are some exceptions. Sometimes it...

Continue Reading
link to What is a Wedge Adjustment in NASCAR?

In the past, when you’ve been watching a NASCAR race, have you noticed when the announcers are talking about a pit crew preparing to perform a wedge adjustment on a car? You might have just taken...