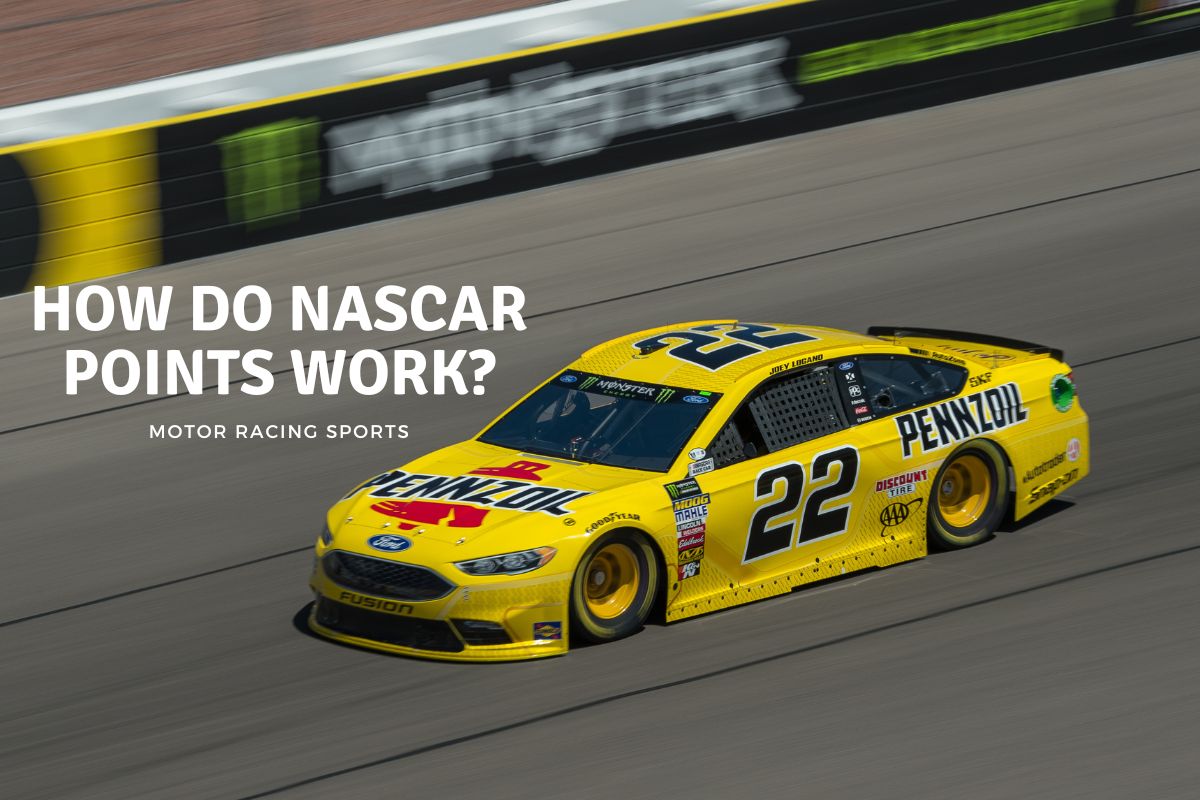 Have you taken a look at the leaderboard of the NASCAR Cup Series recently? Or the Xfinity or Camping World Truck Series? There are a lot of points on the board right now, but where exactly do they all come from? How are they allocated? It’s not so obvious when just looking at the current standings.

NASCAR Points are allocated in a decreasing amount depending on the final finishing place of drivers. Unlike other motorsports, like Formula 1, points are awarded to all finished from first to 40th. Since 2004 a playoff, decreasing round of 16, 8 and finally four has been used at the end of the season.

At the time of writing, just for an example, in the NASCAR Cup Series, the current leader with 5,040 points after 4 wins and 11 finishes in the Top 5 is Joey Logano. Chasing Logano with a very close 5,034 points, 2 wins and 15 finishes in the Top 5 is Ross Chastain in his Chevrolet. Behind Chastain, with more wins (3 in total) but fewer Top-5 finishes (12) is Christopher Bell in his Toyota, totalling 5,027 points.

In today’s article, we’re going to decipher how these points are allocated.

How are NASCAR Points Allocated?

The current point system in NASCAR races is based on the “charter” system that was established back in 2016. This allows for up to 40 cars to be on the track in any one race, with each finishing spot being worth something in terms of points. Therefore, it always pays to finish, even if you’re coming 40th out of 40. It also seems only fair that in an endurance race there is something for getting to the finish line!

Points are also awarded during each of the three stages of a NASCAR race, but not in the same way that they were in 2016 and earlier.

From 2017 onwards, after the implementation of the charter system, for example, there were no more bonus points for those who were leading laps or who led the most laps.

In the current system, bonus championship points are awarded to those who finish in the top 10 of each stage for the first two stages: 10 for the winner, and then 9 for the driver in second place, 8 for the driver in third, and so on down to one point.

How are NASCAR Points Allocated in the Playoffs?

Additional points for top drivers are available in the form of playoff points. After each championship season, the top 16 drivers can enter the playoff season, which runs from September to November, and in the 2022 season from September 4 starting at Darling Raceway, and proceeding through 10 races to the last one at Phoenix Raceway on November 6.

Then, currently, they race in the final race of the season at the short track in Phoenix to see who will be crowned champion.

So how are the points awarded? Firstly, playoff points are awarded during the regular season in the following three ways:

During the playoffs, points are awarded during each stage:

10 points for first place,9 points for second, and so on. After that, the playoffs use the same points scale of 40 points for drivers progressing through. There is a score “reset” after each stage as well, to prevent any one driver running away with a score through the playoffs. That works like this:

In the final playoffs race, known as the Championship 4, the top drivers go toe to toe, all starting with 5,000 points for a winner-takes-all result. That explains why in 2022 you have Joey Logano on top with a very specific-sounding 5040 points, because he won the final race at Phoenix Raceway, with Chastain finishing third and gaining 34 points to complete his own season on 5034.

What are Owner Points and Manufacturer Points?

As it happens, the point system doesn’t stop with championship points and playoff points. There are also “owner points” and “manufacturer points” which we will introduce below:

These are accrued in much the same way as driver points, but they are applied to a car rather than to the driver. Since the points apply to the car, the result is that multiple drivers using the same vehicle can accrue points for their team. That can come in handy if any one driver has to miss races due to illness or injury. These points contribute towards an “Owner’s Championship” that is fought between top racing teams throughout the season.

These points are taken from all drivers in the same car and added up through the season. There are three manufacturers in the NASCAR organization: Chevrolet, Ford, and Toyota. By adding up each manufacturer’s individual driver points, they come up with a total manufacturer score, and thus the Manufacturer’s Championship winner can be announced at the end of the season.

Why Do Points Matter?

Most obviously, points matter because more points means more glory for each driver, each car, and each manufacturer. As with virtually any sport with a league or leaderboard, the entire point is to accrue points over a season and outshine your rivals. Beyond the pure joy of winning, however, there is a little more to this glory. It can also act as an important fuel for the following two reasons why points matter.

Glory from winning more points acts as a key draw to sponsors. The drivers and teams with the most glory from winning races improves its image the most, and thus attracts more attention from those willing to pay millions of dollars for the key advertising spots on the driver’s clothing and on the car itself.

Fewer points means less interest, which eventually makes it harder to attract talented drivers and sponsors to teams, which in turn means less ability to compete in the long run.

Points are a validation of that investment, a strong piece of evidence that teams are spending money wisely and getting the points (and glory) needed to make the investment worthwhile. Prize money always helps too, of course, but the glory from points is all part of what makes that possible.

Hopefully the complicated, some say overly so, points system that NASCAR uses is a little clearer now. Well at least until the playoffs!

What the introduction of playoffs has done is create two champions throughout the season, one who is called the regular season champion who has the most points throughout the season till September, then the full season champion who wins that head to head race in Phoenix in November. Which one is more glamourous or coveted is up to the drivers to decide.