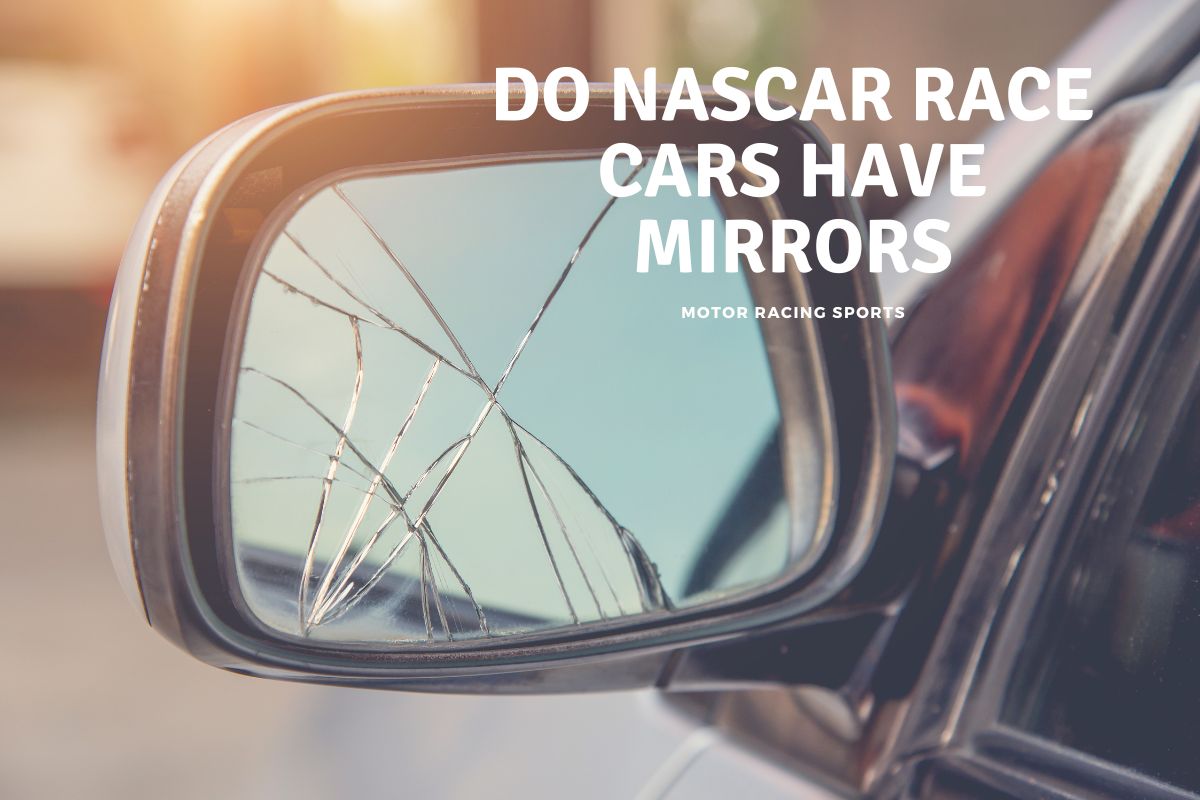 With so much going on at high speeds in NASCAR, and the need for the driver to be aware of everything going on around them at speeds of up to 200 miles an hour with 40 other race cars, on tracks sometimes as small as half a mile it is easy to wonder how do they see all of this. Do they use mirrors, either side or rear view oor are there other ways they get to know what is happening in the race.

Most Nascar Race Cars do not have rearview or side view mirrors, especially side view mirrors, as they are strictly prohibited as a safety precaution in the races as a rule by the board of racing directors. Instead, most of the Nascar race cars use cameras instead of using the average mirror.

But this begs the question. If mirrors are so important when driving a normal car to make sure the driver can avoid any accidents by being aware of all of their surroundings, why do most Nascar race cars not have any mirrors?

Why Do Nascars Not Have Mirrors?

In previous years, Nascar Race cars used to have mirrors, but because of the fast pace nature of Nascar racing and being in such close range to other cars moving at the same pace or even faster, it’s not enough to rely just on old-fashioned mirrors, never mind how much contact can occur during a race.

And so, the majority of Nascar race cars have been given an upgrade to ensure more safety and efficiency during the races, by giving the Nascar race Cars rear view cameras and spotters up high with binoculars to alert the driver of other vehicles that are close to the car.

Nascar drivers can use rear view and side view mirrors as long as they remain in the Nascar race car and are not sticking out from the side.

Do Nascar Drivers Need to See What Is Behind Them?

These cameras in the Nascars are very similar to the typical review cameras used in cars on the streets, which are typically used when the driver is reversing. But for Nascar drivers, this review camera is constantly on and acts as the rearview mirror.

They are afford a much wider and better view than a rear view mirror does.

Why Do Nascars Use Cameras?

The Next-Gen Nascars are mirror-free, whether rearview mirrors or side view mirrors. The Nascar team now relies on the use of in-car cameras to help them track the race. Cameras were instituted into the cars mainly for the benefit of televising the sport. Cameras also provide some great benefits to the teams as well though.

There are three main cameras on a Nascar.

The cameras use a 1080p wide angle lens and can be remotely viewed by the camera technicians who installed them.

The cameras provide the team with instant information regarding the race as well as allow viewers at home to experience the race through the cameras right on the car. Yes, that’s right. Using the Nascar app you can stream the in-car footage of the race as it’s happening and the Televisions networks often switch to these cameras to show the audience at home race events ( especially crashes) from multiple car and drivers points of view

Viewers can also select which driver they want to follow. Out of the 40 racers, viewers can choose whose car they would like to sit in and change, as long as the camera is still functioning after 500 laps!

The benefit to the racing teams is from the cameras they can see everything happening on the track from the drivers perspective, and beyond. Let’s say, for example, a driver tries to pass on the right-hand side near the wall.

As he is in the process of passing the driver in front cuts him off causing him to break suddenly and causing a potential accident. The three cameras would provide more than enough information to show what happened in that situation, due to the high number of crashes in NASCAR races seeing what’s happening and doing something about it are two very different things however.

A disadvantage of the in-car cameras

unfortunately is the fact that no matter what the drivers do, they will always be open to the scrutiny of the public viewers. This can add unnecessary pressure on the drivers, and since they have added access to Pit radio its not just the mistakes that can be seen they can be heard as well. Driver reactions which, understandably, can get a little colorful at times.

Although this is often reviewed for TV audiences at the track it can often be heard in real time, and in all its glory (or not)

Ther eis no direct answer to this, some Like Chris Buescher have welcomed it saying that it has increased the view, and others like Denny Hamlin

are not planning on using it at the moment. He suggests that the view has been reduced and that adjustments with the car might be better than the installation of cameras to compensate.

William byron also liked it saying its viewing angles and refresh rate were helpful. Although not a scientific study it does appear that younger drivers seem to welcome it more than the older drivers. Who would have thought!

Why Do Nascars Use Spotters?

Although there are quite a lot of drivers who do not like to use the review cameras, and would prefer to use the mirrors; the Next-Gen of Nascar Race cars does not have any mirrors and rely solely on using the camera system.

Although cameras Have there uses, most teams and drivers still largely rely on spotters. Spotters are members of the team who are responsible for watching the race from a higher point with binoculars and relaying important information to the driver.

Nascar drivers are dependent on the accurate time and predictions of experienced spotters. The job of a spotter is to be the driver’s backseat driver from above. They typically stand at the high point on a grandstand or around the track to give them the best view.

Spotters also have the job of predicting outcomes and the moves of other races to help their drivers. If drivers are coming up to the speedway and the driver has a car in his slipstream the spotter will inform the driver which direction to move to either safely block him off or allow him to pass.

Spotters are also there to help motivate drivers. Drivers can often get discouraged while driving so having someone in their ear encouraging them is always a win. Drivers get to hold the trophy but it’s the combined effort of the driver team, car and spotter that brings the trophy home.

Whilst some drivers might prefer mirrors, the Nascar industry has found it in their best interest to fit the cars with 3 cameras. One on the rear bumper, inside the cockpit, and on the roof of the car.

This improves the viewer’s experience and has given the sport much more attention in previous years. Without mirrors, drivers rely largely on the guidance of their spotter who plays a vital role in giving the driver crucial information about the race.