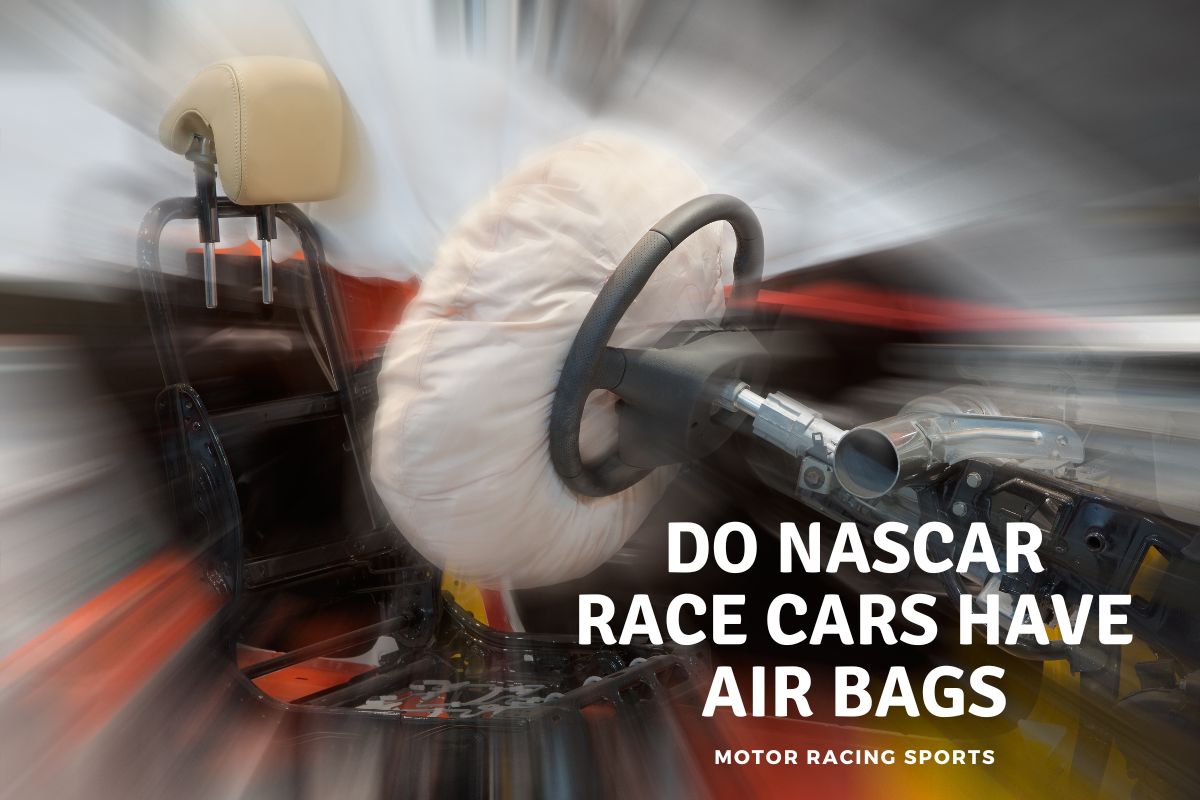 The arrival of the next-gen NASCAR car in 2022 has fueled a fierce rumor mill on safety concerns, and there has not been a great deal of transparency or open communication from NASCAR on the matter. It’s ironic that the very latest, most cutting-edge car that was heralded as a huge technological step forward for the sport is now being held back by apparent safety issues.

NASCAR Race Cars do not have Air Bags and there is no current plan to utilize them as part of the safety equipment. Airbags are designed to mitigate the bodies forward or sideways movement in the event of a crash. NASCAR uses 7 point harnesses, Reinforced roll cages and HANS devices to greater effect in lieu of airbags.

A longer-standing safety issue when it comes to NASCAR and other race cars, however, is that of airbags. Do they have them? Why or why not? Will they ever have them? If it’s common sense to install them in ever-increasing quantities and styles in regular passenger cars, how can it not be so black and white in the world of motoring where the cars are going 200+ mph on a regular basis? These questions and more we will explore below.

Do NASCARs Have Airbags?

In short, no, they don’t. NASCAR vehicles, despite regularly being called “flying bricks” that race around some of the world’s most infamous tracks and circuits at dizzying speeds, do not have features like airbags that have been standard in just about every single mass-produced passenger and family car since the early 1990s, and many more high-end cars before that.

Why Do NASCARs Not Have Airbags?

The most positive reason for NASCAR resisting airbags is that they are already equipped with myriad features that protect drivers and others in ways that can even render airbags problematic. Most importantly, drivers are strapped in and secured in place using the 7-point harness system and the HANS device which keeps their head, neck and shoulders steady.

This somewhat negates the need for airbags, which primarily are meant to cushion drivers’ heads as they fly forward after a collision.

NASCAR team members and others more familiar with the engineering of the sport tend to argue that airbags are simply not a safety feature that was ever meant for such a vehicle as a NASCAR race car. The fact is that these airbags were meant for street-legal cars that get into collisions at both low and high speeds.

As we mentioned earlier, their primary function is to cushion drivers and passengers and prevent them from hitting their head on hard surfaces like the dashboard, steering wheel, or side windows. The idea is to minimize overall movement of those in a collision, and thus minimize potential bodily injury. The extent to which they really achieve this remains a subject for debate.

Drivers of street-legal cars need to be flexible and free to check their mirrors, their blind spots, and to turn their whole body while opening the door to look for cyclists, etc. NASCAR drivers, conversely, have to be as secure and immobile as possible when they take to the track. Thus there’s nothing for airbags to really do.

Could Airbags Be Dangerous to NASCAR Drivers?

We briefly mentioned earlier that airbags could be problematic for NASCAR drivers, but how? Okay, it’s fair to say that with NASCAR drivers restrained in place by their harness and the HANS system so far back from the steering wheel, that it would be highly unlikely a deploying airbag would reach them, but would it really be a problem to have one installed anyway? Just as a precaution?

In fact, yes, it would be a problem…quite a dangerous problem in fact. NASCAR fans know that their beloved motorsport is a close-contact event. It’s one of the primary reasons that American audiences tend to favor sports like NASCAR over Formula 1, which is more popular in Europe. In Formula 1, contact tends to mean total disaster, but in NASCAR it’s just part and parcel of the event, and it explains exactly why airbags are not a good idea.

Let’s say we’re in the middle of the Coca-Cola 600, and the 43 cars on the track are getting clumped together and it’s starting to look tense. One car in the pack has a scrape with the wall, another has a bump with the car in front. In a NASCAR race, these things don’t matter, and things just continue on as normal. However, with airbags in place, such contact might cause them to deploy, thus obstructing the driver’s view and creating a potentially lethal situation.

The safety features of a NASCAR vehicle are built for the sport in which the drivers are taking part. Besides the harness and HANS system, there is also the roll cage, the one-body chassis built with extraordinary strength and sturdiness, the advanced helmets and communications systems, the open window with netting to ensure air flow but easy escape in the event of a crash, and more.

The modern NASCAR is the result of decades of advancement and millions of dollars in spending on research and development. Every generation of car has its problems — as NASCAR are now learning with their next-gen models — but there are also significant improvements, too.

One also must remember what the chief threats are to driver safety. The only one we haven’t yet mentioned is the ever-present danger of all the rushing air getting to the wrong places and lifting the car and driver right up off the track as if they were caught in a tornado.

This requires the car to be designed with the right kinds of features — like roof flaps — that help create the necessary down force that keeps the car on the track even when it’s flying around at 200+ miles per hour. Airbags do nothing to contribute to this, and thus are not a consideration.

While it may seem counterintuitive to suggest that safety is the number one priority in NASCAR it is true. A sport that sees race cars travelling at up to 200 miles an hour for 3-4 hours at a time while hitting the wall, each other, and on occasion even safety cars and track cleaning equipment.

While these cars are called stock cars the safety features vastly outweigh what you will find in their road going counter parts. We take a look if Airbags are one of those safety features that move from the road car in NASCAR in the article below.

There are plenty of other safety features in NASCAR Race cars including, HANS devices, fire retardant suits, relocated fuel tanks, reinforced cages, removal of headlights, crash barriers and more but airbags are not considered feasible in a NASCAR Race,

While the 7 point harness and the hans device are designed to stop the forward momentum of the drivers head and shoulders ina crash an airbag may not even reach them and of course with the rough and ready way of racing there is a real danger of an Airbag deploying during the race! That would be disastrous!

Continue Reading
link to Do NASCARs Have Doors?

Editorial credit: Roman Korotkov / Shutterstock.com When asking about cars, it may seem like a silly question to ask whether or not they have doors…but NASCAR is the motorsport that just keeps...