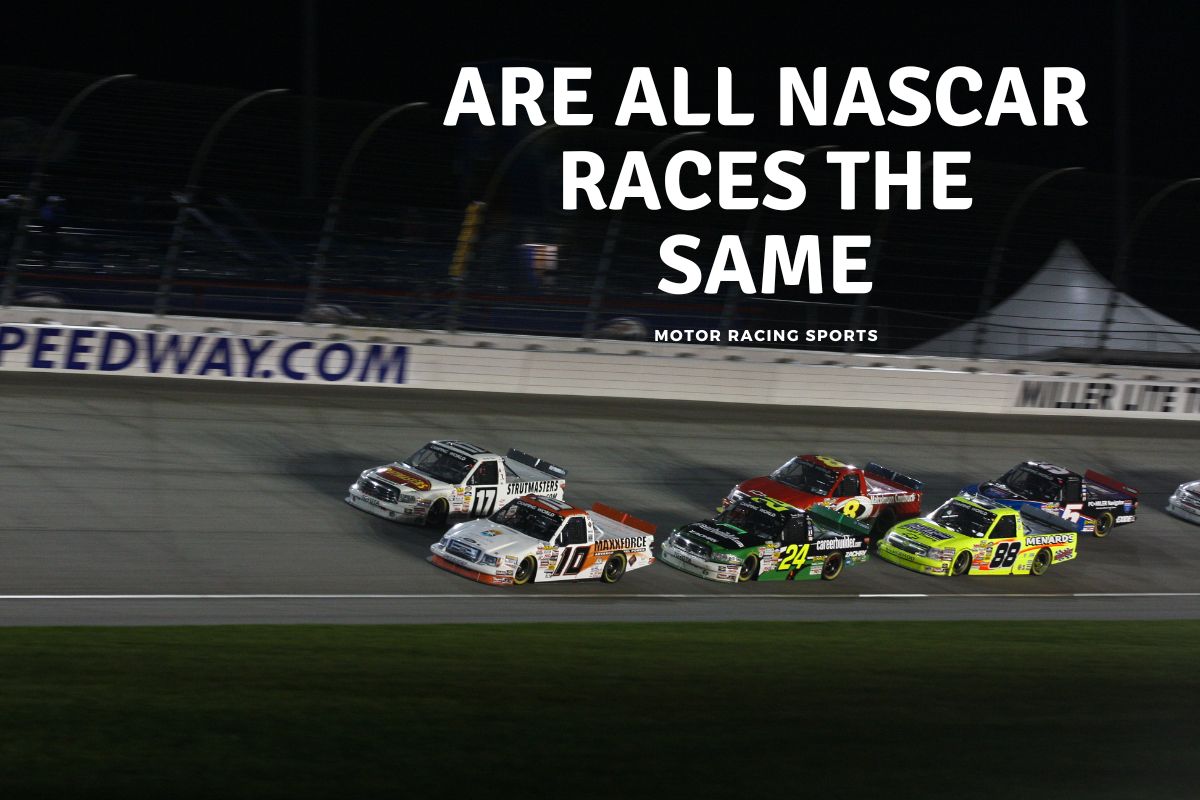 Unless you are a die-hard race fan, you may think that NASCAR is NASCAR and that there is no difference. It is commonly believed that the race cars that legends such as Richard Petty and Dale Earnhardt drove are called NASCAR Race Cars. It is a misconception that it is wrong on at least four levels. There are plenty of race goers that watch all four aspects of NASCAR racing and we take a look at those in the article below.

NASCAR is an umbrella name for four major national racing championships, These are the Cup Series, Xfinity, Truck Racing and ARCA, with other small ones that branch out from them. There small ones are based on regions, such as Mexico Europe and Canada, while the main four are in the United States.

The thought that all NASCAR Racing is the same is wrong for the most part. When you talk about professional stock car racing of this type and style, all the races are grouped under one name, NASCAR. Let’s break them down into the four primary races branched out under the common name everyone knows.

You may still be a bit confused because when race fans talk about the NASCAR races all weekend, they are talking about four very different races. The cars, and trucks, are not built the same. Each of them is different in its own ways.

In 2018 NASCAR acquired the ARCA racing series, which is broken down into two different sections. ARCA Menards West Series and the ARCA Menards East Series are the same cars and types of courses but are separated by an imaginary line that splits the nation in half.

The ARCA series races are where many drivers begin their careers, hoping to move up to one of the following two series, on their way to racing with the big-name racers in the Cup Series. It is a good place for drivers to learn how to navigate the tracks since most of the courses they run are the same as the other three.

The cars used in this series are the older cars that the NASCAR Cup Series no longer needs. That means that the motors and drivetrains are what you would call old-school, but thankfully they have upgraded to composite bodies (since 2014), which are safer, lighter, and allow the cars to be faster and more nimble around the track.

In 1993 a group of offroad truck racers had an idea. They got together with their engineers and mechanics and built some trucks designed to race on the circle and road course tracks that the Cup Cars raced on. A prototype was shown off at the 1994 Daytona 500. As you could expect, they were a huge hit. In 1995 the first truck series originated, which was called Super Truck Series. It was explicitly built truck designed like a NASCAR Cup Car, but a truck.

The NASCAR Camping World Truck Series are predominately driven on intermediate oval courses, with some other typical tracks thrown into the mix, including a couple of dirt tracks. The trucks are above the ARCA cars, which is another step closer to racing in the Cup Cars. If you are successful in the truck series races, you will be able to go into the big dog races when an opening becomes available.

The big difference between the trucks and Cup Cars is that the engine in the truck is not fuel injected. They are powered by a carbureted 5.8L V8 that pushes out around 700 horsepower, compared to the electronic fuel injected 5.8L of the Cup Cars that put out about 900 horsepower. The controls and driving experience are also different, making it a challenge to drive both in the same year, which a few drivers have opted to do.

The Xfinity racing series is the final proving ground for the drivers looking to run in the NASCAR Cup Series. It is a place for them to grow respect from the other drivers, catch the attention of the team owners in the main series, and build a fanbase. A driver without a fan base will not become a top racing superstar because they will not draw in the money the team owners need.

It may not seem like a fair trade-off because a driver needs to be aggressive to win, but that means making a few enemies along the way. The drivers need to find a happy medium between likeability and driveability, which only work hand-in-hand if the car owners can give them a fast car that can actually place in the top 10 consistently.

The Xfinity cars are different in a couple of ways, including the length of the races. The Xfinity cars run on the same tracks as the Cup Cars but fewer laps. They use the same stage racing format, but the smaller cars can hold more fuel in their tanks. This makes it possible to run more laps than the Cup Cars, plus the engines only put out 700 horsepower, which is the same as the Trucks and lower than the Cups. However while slower it is not by much despite the less power in the engine.

The NASCAR Cup Series is the top dog in the world of stock car racing. The other three levels of NASCAR are all stepping stones on the road to stardom, which ends by becoming a prominent driver in the Cup Series. You may be more familiar with NASCAR Sprint Car Series, but the name was officially changed in 2016 when Monster Energy took over the primary sponsorship role.

These races take on several different tracks, from oval to road courses, requiring the drivers to run more laps than the others. More laps at higher speeds because these cars can push out 900 horsepower, some have even claimed to reach up to 1000 horsepower although with limiters these are not seen on actual race days. That is a lot of power for a composite-bodied car that can reach speeds of up to 200 MPH in a race.

The NASCAR Cup Series is the one that most people think about when they talk about NASCAR, but it should be apparent now that there are more levels than just one. The name NASCAR is the umbrella company for all the series levels in stock car racing, including some that are not in the US.

So, the bottom line is that NASCAR races are not all the same. They have different cars, different drivers, different sponsors, different rules, and of course, different expectations and requirements. Stock car racing has come a long way since the days of the retired moonshiners testing their driving skills against each other, but the main idea is still the same. Put the pedal to the medal, bump your competition when needed, and hold on for the ride once that green flag drops.